Does your heart melt every time you see a teeny tiny pink frilly tutu?

Of course, it does. That’s why you’re here: you’re wondering how to conceive a girl.

From the Shettles Method to sex positions, read on for some tips.

First, a disclaimer: methods of trying for a boy or a girl don’t guarantee success, and they aren’t always backed by scientific evidence.

But if you’re interested in conceiving a girl, it can’t hurt to try.

And you have a 50% chance either way.

Here are some methods to try for gender selection.

How can I conceive a baby girl naturally?

BellyBelly believes the best outcome is a healthy baby, whether it’s a boy or a girl.

However, we understand couples have their own personal reasons for wanting to try for a baby girl.

It’s also extremely important to note it’s the man’s sperm cells that decide the sex of the baby.

Although various methods suggest things we can do to conceive either a boy or girl, gender selection is ultimately determined by the sperm that reaches the egg.

Once fertilization has occurred, the sex of the baby has been decided.

How to conceive a girl

Ready to find out how to conceive a girl?

Here are 9 tips to get you started:

How to conceive a girl tip #1: The Shettles Method

The Shettles Method has been used for gender selection since the 1960s. It claims a 75% success rate for couples hoping to conceive a girl.

Dr. Shettles believed the most important factor was timing.

These are the foundations for the claim:

Important things to note about this method:

The theories the method was based upon, however, have been disproved.

This study explains the controversy over Shettles’ original research.

The Whelan Method, an alternative to the Shettles Method, says the opposite might be true.

This method suggests the gender selection of a girl can be achieved by having sex 2-3 days before ovulation.

Timing of intercourse gives you two options to try:

How to conceive a girl tip #2: High tech options

We understand there are reasons why some families hope for a baby of a certain sex.

For those able to conceive naturally, seeking high tech methods of gender selection is often seen as extreme.

However, if you need assistance to conceive, you might consider these options.

Two high tech options for conceiving a girl include:

Both of the above methods are somewhat invasive, often expensive, and not available everywhere.

How to conceive a girl tip #3: Positions

According to different methods, including the Shettles Method, positioning during sex influences which sperm might reach the egg.

Positioning affects how close to the cervix the sperm cells are ejaculated.

By preventing deep penetration, you might prevent the boy sperm from reaching and fertilizing the egg.

How to conceive a girl tip #4: No orgasm

Avoiding orgasm could be key to conceiving a girl, according to some gender selection experts.

The female orgasm releases an alkaline secretion which might help boy sperm to survive longer, by creating a less hostile environment.

Without these secretions, boy sperm cells find it harder to survive and have less chance of reaching the egg.

How to conceive a girl tip #5: More sex

Rather than restricting your sex life to specific times, you should aim to have more sex when you are trying for a girl.

In the days leading up to your key conception time, you should have as much sex as possible.

This will reduce your partner’s sperm count, and mean there are less fast-swimming boy sperm available to join the race for fertilization.

According to one study, eating more fruits and vegetables can improve your chances of conceiving a girl.

Some people believe a vegetarian diet can help you to conceive a girl – especially if you eat foods such as spinach, nuts and broccoli.

Choose foods naturally high in calcium and magnesium, such as:

These are all said to be good for conceiving girls.

How to conceive a girl tip #7: Acid house

Another food-related tip is to eat acidic foods in the days leading up to ovulation.

Male sperm cells are less able to survive in acidic environments. Evidence suggests eating acidic foods can alter the pH of your vagina.

Bear in mind that it’s unhealthy for your body to be in an acidic state, but if you want to try, stock up on foods such as:

Some people believe you should also avoid eating alkaline foods such as:

It is more important, though, to have a healthy baby and enough folate in your body to avoid neural tube defects.

How to conceive a girl tip #8: Low salt

If you want to conceive a girl, salt is out.

A low salt diet is said to improve your chances of conceiving a girl.

According to the same research that indicates more fruits and vegetables help conceive a girl, a diet high in sodium and potassium favors male sperm.

You should cut out foods such as:

It’s important to note many people don’t alter their diets while trying to conceive.

Focusing on overall nutrition is important while you are trying to get pregnant, regardless of sexual preferences.

How to conceive a girl tip #9: Bath time

Some people believe boy sperm are heat-averse, so having a bath prior to sex might help to weaken the male sperm.

Other things said to weaken male sperm are:

However, these things can also affect overall fertility, so be careful if trying this method.

What are the chances of having a girl?

If you long for a girl, you can try the above methods, but there is little to no scientific evidence for gender selection.

Although there might be plenty of anecdotal evidence about their success, results can vary.

Some of them, particularly the timing methods such as the Whelan Method, might actually reduce your chances of conception.

Bonus tip: How to conceive a girl #10: The Babydust Method 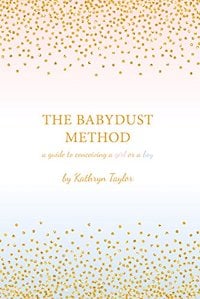 The Babydust Method is a more recent book on the market and claims to be based on the latest, scientific research.

If you want to know how to conceive a girl, this book is an essential read, according to raving fans!

The Babydust Method author, Kathryn Taylor, has a Bachelor of Science in Microbiology, Immunology, and Molecular Genetics. In her book, Taylor discusses egg polarity, pH, and acidic/alkaline/ion diets.

Taylor’s approach involves a combination of precise timing and frequency, which has been proven to work in a published clinical study.

Here are some of the many rave reviews from readers:

“I read several books on sex selection and this book was my favourite. It was easy to follow, to the point, and made the most sense. I followed the instructions in this book to help increase my chance of conceiving a girl. I got pregnant on the first try, and ultrasound and blood tests have confirmed we’re expecting a baby girl! So thrilled!!” – Lauren

“I purchased this book and my husband and I decided to try it out. We nailed it the first time we tried. After 3 healthy boys we are expecting our little girl in July. My family and I can not thank you enough for helping us make our dream come true. Cannot wait to hold Emily Rose in our arms!” – Jennifer

You can grab a copy from Amazon, or the Book Depository.

You can also check out Dr. Shettles best-selling book, How to Choose the Sex of Your Baby.

If you’re curious about what’s recommended for conceiving a boy, see our article, How To Conceive A Boy.

Q: How do you avoid an extremely faint line pregnancy test result?

A: If you want to avoid getting an extremely faint line on your pregnancy test, then two things are most important. Firstly, you should test your urine only a day or two after missing your period, and not before. Secondly, take the test first thing in the morning, when the pregnancy hormone, hCG, will be more concentrated in your urine.

Q: How do you increase your chances of having a boy?

A: If you want to increase your chances of having a boy, one thing you can do is to eat foods that contain potassium and sodium. In addition, have intercourse right before the day of ovulation, to give the male sperm an advantage.

Q: When does a baby start talking?

A: As early as 11 months is the expected age for a baby to start saying his or her first words. They usually are ‘dada’ and ‘mama’. They could also be other words your baby always hears a lot at home.

Q: Is it ok to drink hot tea while pregnant?

A: Are you curious if it’s safe to consume hot tea while pregnant? A woman who is pregnant can still drink hot tea, but it’s best to opt for a herbal one. Teas that contain caffeine, such as black tea and green tea, should be avoided during pregnancy.

Coffee and Pregnancy – Is Coffee During Pregnancy OK?