Dad Turns Baby Into Real Life Elf On The Shelf

Christmas is all about one-up-manship.

When December rolls around, social media is filled with photos of hilarious elves pulling cheeky pranks on their host families.

Parents battle it out to come up with the most original, creative and amusing mischief for their elves.

Well, one dad has outdone everybody else by switching the little toy for a real-life elf.

Dad-of-six, Alan Lawrence, decided to get the youngest member of the family in on the magic.

Four-month-old Rockwell became the family’s elf and got up to all kinds of trouble in the days before Christmas.

Rockwell’s mama made him an adorable Elf on the Shelf costume and his dad Lawrence, the creative mind behind That Dad Blog, documented the whole thing on his blog. 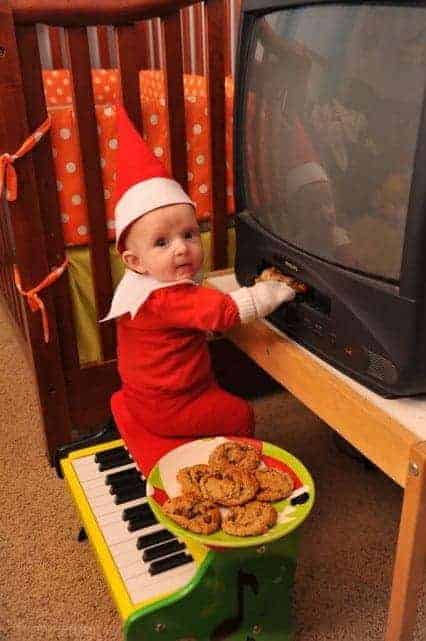 Recreating some of the more famous elf escapades found on Pinterest, Rockwell makes the photos even cuter, thanks to his adorable face and cheeky expressions.

The iconic shot of the cheeky elf toilet papering the Christmas tree just works so much better with a real life baby.

An adorable baby with a cheeky grin, Rockwell makes the perfect elf. Lawrence even got some of his older kids involved in the photos, including a gorgeous shot of Rockwell balancing on the bars of the cot next to his toddler brother, Will.

Lawrence first created the unique Elf on the Shelf series back in 2015.

Little Rockwell is now a toddler and he’s still busy providing festive humour to the masses. His elf suit might be a little bigger this year, but Rockwell has been busy causing havoc.

And, as you might expect, a toddler elf can get into even more bother than a baby elf. You can see their latest Elf on the Shelf photos on Instagram.

Oxytocin During Pregnancy – 10 Ways To Boost The Love Hormone