4 Huge Benefits Of Toy Minimalism – See My Before and After Photos!

Toy minimalism can completely change the energy in your family home. Here’s my journey to embracing toy minimalism, and enjoying the many benefits that came with it.

When I was pregnant with my eldest, I remember standing in his future bedroom and daydreaming.

I imagined my soon-to-be child playing with wooden toys and whimsical knitted animals.

Not a plastic flashing toy in sight. Pretty image, right?

It wasn’t just about the aesthetics. Having worked with children for many years, and after reading everything I could get my hands on about children’s play, I had developed the ideal of a simple childhood.

A childhood where outdoor play was high on the agenda, and where toys that developed the imagination were valued over toys that ‘did stuff’.

I shared my ideal with anyone who would listen – and I’m pretty sure I sounded like a jerk at the same time. I always asked family and friends to be mindful about toy purchases.

Yet somehow, over time, and after three children, the toys crept in. There were junky plastic figurines with missing arms, zillions of cars, and mountains of Lego that induced pain every time I walked down the hallway….

Although I wouldn’t call myself a minimalist, I don’t like ‘stuff’. Clutter drives me crazy, and I am certainly not a collector of things (you know – teapots, giraffe figurines and the like).

But, when you Google ‘minimalism’, images of white, empty spaces fill the screen. That’s not me either!

I think there’s a common misconception that minimalism equals white nothingness. A few months back I watched the Netflix documentary The Minimalists.

What struck me was although minimalism means white nothingness for some people, for many it is simply about freeing yourself from an attachment to ‘stuff’.

In fact, on their website of the same name, Joshua Fields Millburn and Ryan Nicodemus describe minimalism as “a tool to rid yourself of life’s excess in favor of focusing on what’s important—so you can find happiness, fulfillment, and freedom”.

For me, minimalism isn’t about how my home looks or whether I’m a non-consumer; it’s about freeing myself from the monotony of cleaning up the toy room.

The Problem With Toys

When I first started talking about being minimalistic in my approach to toys, I am pretty sure many people thought I was selfish.

I think I might even have heard, from at least one concerned friend or family member, what could have been a Helen Lovejoy (The Simpsons) plea: “Won’t somebody please think of the children?”

And yes, to some extent, there is a little selfishness in there. I don’t really want to spend my days cleaning up the toy room again and again. I don’t want to trip over dolls on my way to the bathroom in the middle of the night.

But these are not my main concerns. About a month ago, I stood in the doorway to our toy room – quite a small space in quite a small house – and shook my head. In the past seven years, we had accumulated an unbelievable number of toys.

I guess it is inevitable, with three small children, but I felt so frustrated with the amount of stuff we had. And what’s more – the children weren’t even playing with it!

That’s right. It seemed the more toys they had, the fewer they played with. I had noticed toys were often pulled out of baskets, but not actually used.

When I watched my three kids playing, I saw that they needed very little in the way of toys. They tended to find a few basic things and then get creative. Some of their best play was done in the backyard with some boxes or a few old sheets and a couple of teddy bears.

The toys were just getting in the way.

Ditching the Toys (Well…Not All of Them!)

I finally cracked. I decided the toys had to go.

Not all of them of course, but a lot! We spent a full day clearing toys from the bedrooms and the toy room.

I would probably suggest you do this with no children present – you’ll never see them love something the way they do when you are about to throw it away!

At the end of the day, we had one bag filled with broken things that were beyond repair, and another, much larger, bag of things we could donate to charity.

We were left with a play space that was free of clutter. The space invited the children to play and to use their imaginations.

What Did We Keep and Why?

The aim wasn’t to get rid of everything – although I’m sure at one point I joked about just putting it all in a pile and setting fire to it. The aim was to keep only the things which genuinely enhanced creative play.

In fact, when interviewed about his research into children’s toys, Professor Jeffrey Trawick-Smith, from Eastern Connecticut State University, suggested “basic is better”, and mentioned open-ended toys, like wooden blocks.

So what did I keep?

As you can see, we ended up keeping quite a bit. But we were mindful about it, and mindful of the fact that we have three children. We also have a bookshelf full of books, and an art supplies cupboard. 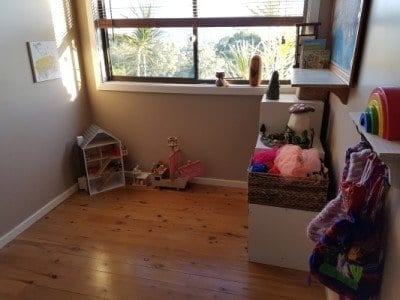 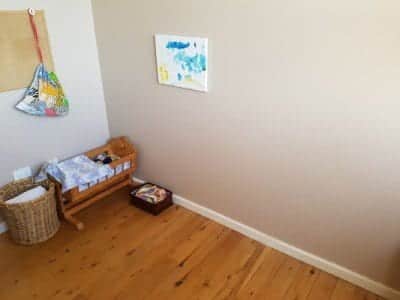 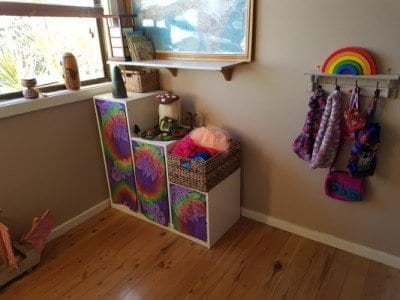 The final result? A space that invites imaginative play.

What Benefits Did We Gain From Toy Minimalism?

In the days and weeks following our big overhaul, I noticed some interesting things about the children and their play, and about myself.

We had four major gains from toy minimalism:

We all gained time. The kids had more time for playing, rather than rifling through a bunch of toys that they didn’t use.

And we reclaimed the cleaning up time – no more long afternoons spent clearing a path through the toy debris when we could’ve been outside in the sunshine.

I noticed the children played differently. One afternoon it was really quiet – you know, the kind of eerie quiet where you wonder where the destruction is happening.

I tiptoed through the house, steeling myself for the inevitable mess. But what I found was even more shocking: my children just playing happily.

That’s right. All three kids were building a city with the small wooden blocks, and accessorising with little animals and people. Their play had become more creative and less reliant on toys.

Not only had I felt overwhelmed every time I walked into the toy room, I am pretty sure my kids did too. They would walk into the room, pull out a few things and then go out again. I think there were simply too many choices, and too much stuff.

Now when they walk in, they have space to play and can see all their choices easily. This has led to more independent play too – another bonus!

This is an ongoing one: something we are trying to teach our children. We are big believers in being ‘conscious consumers’, which means making mindful decisions about what we buy and what we hang on to.

It’s important for children to be appreciative of what they have. A room completely filled with random toys does little to reinforce that value.

Now, our children are seeing that more isn’t always more. They are taking notice of the special things they have, recognising the people who gifted them, and recalling the memories attached to them.

I’d like to say that it is easy just to get rid of toys. It’s not.

There were things that had sentimental value attached, but our children had outgrown them. We made the choice to gift those things to friends, or donate them to the kids’ preschool. We packed some things away for our grandchildren. That’s a long way off, but I’m sure I’ll be glad I kept them safe.

Sometimes we hold on to toys for far longer than we should, or we feel pressured to make sure our kids have every toy they desire.

When we can free ourselves, and our kids, of the clutter, we make way for better play!

How Many Hours Of Sleep Does A Baby Need?

The 10 Stages Of A Child-Free Night At Home

Nicole is an early childhood consultant who spends her days talking and writing about play and the importance of childhood, while avoiding stepping on Lego, playing tea parties with her toddler and looking for her keys. Nicole loves to read, is a keen photographer and is at her happiest when she is outdoors with her husband and three children.

The 10 Stages Of A Child-Free Night At Home