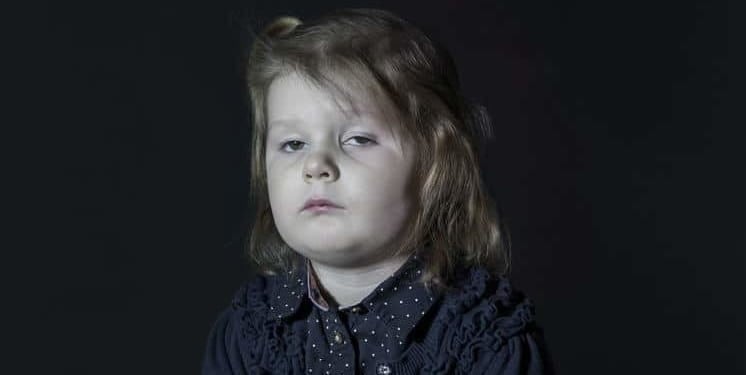 You’d be hard pressed to find a child these days who doesn’t love television. Even when parents limit their exposure to technology, children are still instantly wowed by that glowing box that occupies a prominent position in so many living rooms across the world.

Australian photographer, Donna Stevens, decided to capture the effect television has on children through her latest photography project. The series Idiot Box was inspired through her observations of her son’s use of the family iPad. With the help of other parents in her local area, Donna found a group of willing participants.

In exchange for a chance to watch their favourite show on television, the children happily agreed to let Donna photograph them. Some of the shows were only five minutes long, but the photographer says that was more than enough time for the children to enter a sort of television-induced trance.

The resulting images have something eerie about them. The children are transfixed, almost zombie-like as they stare at a screen out of shot. The glazed over eyes are nothing unusual, in fact you’ll probably recognise the vacant stares from your own living room at home.

Writing on her website, Donna says, “Idiot Box hopes to explore the darker side of our love for technology. The series (shot while children watched TV) was an exploration into the co-dependent yet contradictory relationship we all share with technology and the media. Should we exhibit more caution about the role of technology in our children’s lives? Is our techno-paranoia warranted? No matter what gadgetry we may possess, do our problems remain human?“

Donna said she became almost invisible to the children as soon as the television was switched on. As the four year old children sat coma-like in front of the box, Donna snapped away, capturing the gormless facial expressions and trance-like state of the children. As any photographer will tell you, it’s not easy getting young children to sit still for a photoshoot, and yet Donna had no problem once the television was switched on.

The photographs are dark and gloomy, and the children appear to be lit by only the light from the television screen. Shot against a dark background, the photographs make a pretty strong point about screen exposure in young children.

Many parents would cite television as a modern parenting tool that makes life easier. Allowing your children to watch the odd episode of a television shows frees up time for you to cook dinner, put on some laundry or make a phone call. Donna hopes that this portrait series will open up a dialogue and encourage other parents to think about how technology impacts on their children.

If you were to compare these images with photographs showing children exploring outdoors, the contrast would be stark. Free play and exploration in the great outdoors encourages children to seek out new experiences. Four year olds allowed to play outdoors will run, climb, jump, roll, collect and explore all that the great outdoors has to offer them. They will squeal and laugh. In a similar photo project of children spending time outdoors, it’s unlikely there would be a pair of glazed-over eyes insight.

Of course, that doesn’t mean television is evil and must be banned. Or that children should spend every second of their free time exploring the wilderness. But what it does mean is that at parents we must start to question the relationship we have with technology, and the impact this is having on our children. If the dead-eyed staring faces of the children in Idiot Box have struck a chord with you, it might be time to consider limiting the amount of television your children watch.

If we want children to be engaged, independent free-thinkers, then we must give them the opportunity to develop the skills and ideals necessary. That means time spent building confidence climbing trees, it means making up their own games for entertainment, and it means spending a little more time away from the confines of a television screen.

See the full series of photos on Donna’s website here.

BellyBelly Creator and Editor, Kelly, did a little home experiment to see what effect giving up screen time would have on her family. You can read the results in her article What Happened When I Banned My Kids From Television & Other Screens.

Could This Be The World’s Best Mother’s Day Present?

Benefits Of Breastfeeding For Baby and Mother

Benefits Of Breastfeeding For Baby and Mother