I Gave Birth Yesterday – Was It Like This For You? 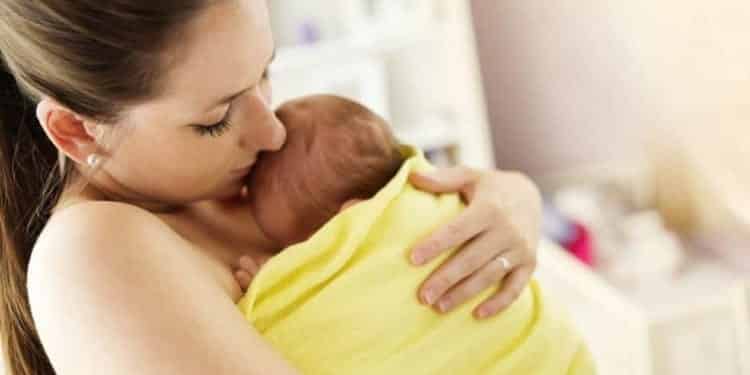 You may already have heard about the I Gave Birth Yesterday photo project. Photographer Jenny Lewis decided that she’d heard enough negative birth stories and fear, and set out to do something about it.

Jenny decided to take photographs of women and their newborn babies the day after the birth, to document that women are ok the day after having babies. She wanted to share a positive message about birth by inviting people to see real women the day after giving birth.

Jenny put up leaflets in her local area and waited for pregnant women to get in touch. The women who wanted to take part were asked to let Jenny know when their contractions began, and the next day she would take her camera round to photograph them. She went armed only with her camera, no make-up artist or hairstylist, to capture a realistic portrait of the new mothers.

In total, she took 150 photographs of mothers and their babies – and 40 of these images have been compiled into a book, One Day Young In Hackney (you can buy it here). The photographs are beautiful! They show happy women, tired women, proud women, all holding their beautiful newborn babies. If Jenny Lewis’ aim was to document the strength and power of women, then she has definitely achieved it. If her aim was to normalise birth and show that not all women are stuck in hospital for days on end, then she did it.

I Gave Birth Yesterday – Just A Moment In Time

The I Gave Birth Yesterday photographs capture a wonderful moment in time for the women and babies. Yet, we must be reminded that that’s all it is – a moment in time. The photographs of beaming smiling women proudly showing their babies to the world do not tell the whole story. They show you a smile, a cuddle, a deep love, but they don’t show you the reality that follows many births.

Even the easiest and most wonderful of births is likely to be followed by some soreness, and many smiling new mothers find themselves grimacing as they sit down. There are breastfeeding barriers to overcome, and the smiling photographs don’t tell the story of the sore nipples, or the tears shed because of them. Or still, the birth trauma which some women are left to contend with.

The photographs don’t show you the fear that new parents feel when they are left to care for their baby, and the deep-seeded fear that they might not be doing things ‘the right way’. The women in the photographs look confident and natural, which certainly isn’t how I felt on my first day as a mother.

And, you know what, it doesn’t matter that the photographs don’t tell the full story because they are photographs that were needed in our modern day of intervention. A snippet of time, a single moment captured for all eternity, and we can’t really expect anything else. And these photographs do exactly what they were intended to do – they show the beautiful and powerful side of brand new mothers. They capture the love and happiness that these women are feeling in every single bone of their bodies.

Hopefully, the I Gave Birth Yesterday project will inspire pregnant women to feel positive about birth. These photographs are powerful enough to re-brand birth, and to let women see that it can be a positive experience. These photographs feature all kinds of different women, all individuals, and that is what makes the project so beautiful.

What My I Gave Birth Yesterday Portrait Would’ve Looked Like

Even though I find the photographs to be breathtaking and moving, I cannot help but consider how they might make new mothers feel. I can only imagine how I would have felt on that first day of motherhood, as I sat exhausted but loved up, if someone had dropped these photographs on my lap. Would they have made me feel like a failure, or would I have seen the beauty in the photographs that I am able to see today?

If Jenny Lewis had come round to my house the day after my daughter was born, this is what she would have stumbled across:

An upturned living room, furniture displaced by the huge birthing pool in the middle of the room. The pool still half-full with water, fluids and whatever else comes out during birth. The pool had been part emptied thanks to an exhausted cleaner (my husband) who managed to spill a lot of bloody water across the kitchen floor before deciding to leave that job for another, less sleepy time.

Me, the new mother, sore and tired, but overwhelmed with love, pride and happiness. Jenny wouldn’t have got a toe through the door before I started telling her the graphic details of my birth, my social filter seemingly expunged along with the placenta. I didn’t have makeup on my face, apart from the dried mascara that had wept down my cheeks at the birth. I wasn’t wearing my favourite maternity dress, I was in pyjamas. I would probably have been topless when she arrived at the door, holding back tears perhaps as I prepared for another of those awkward first feeds.

The newborn baby would was gorgeous, as all newborn babies are. I would have held her proudly, her nappy on back to front unbeknownst to me, but not with the confidence of the other women. I would have been timid, scared of dropping her, and I wouldn’t have been able to keep those emotions from my face.

If Jenny wanted me to sit on the (only not upturned) sofa, I would have winced as I sat down, the painkillers not quite numbing the rawness I still felt. I know that, if Jenny had come to photograph me that day, I would love the photographs. I doubt I would have them framed on my wall, my nursing bra open to the world, but they would be something to treasure. The chaos and emotion that comes with a new baby captured perfectly in one image. And yet, it would look nothing like the other photographs I have seen. It wouldn’t be perfect or polished, and I wouldn’t look carefree or relaxed. I would look besotted, exhausted and terrified, which is exactly what I was.

What would your I Gave Birth Yesterday portrait look like? Share your thoughts in the comments below.