6 Week Ultrasound | Pictures, Twins and What To Expect

Just found out you’re pregnant and are having (or had!) an ultrasound? You probably have lots of questions about early pregnancy ultrasounds. At 6 weeks, an ultrasound isn’t medically necessary; ultimately it’s your choice to have one or not.

An early ultrasound can be helpful if you’re not sure of the first day of your last period (which is used to calculate your estimated due date).

If you have irregular periods, history of miscarriages or pregnancy complications, your health care provider will likely want you to have an early scan, just to be sure everything is well.

Facts about an ultrasound at 6 weeks of pregnancy

So you can quickly access what you want to read the most, here’s a list of what you need to know about your first ultrasound:

6 week ultrasound what to expect

If this is your first ultrasound examination, you might be unsure what to expect.

During your ultrasound, the technician will check to see if the embryo has implanted in the uterus (and not the fallopian tubes, which is called an ectopic pregnancy), if you have twins or more babies, and if a yolk sac is present.

You might be able to see the fetal pole and even a heartbeat! But if you can only see the empty yolk sac, don’t panic! It’s very normal at this early stage.

An ultrasound during early pregnancy is usually a transvaginal ultrasound. A specially designed ultrasound wand is inserted into the vagina, to give a clearer and more detailed view the uterus.

The wand will not be painful, although you will feel some pressure and maybe some mild discomfort.

An internal ultrasound allows ultrasound waves (which heats tissue) to get very close to your developing baby, particularly its brain. For this reason, some people choose to avoid unnecessary first trimester scans.

Ultrasounds from around 8 weeks pregnant are usually done externally on your abdomen.

Many parents are curious to know if they’re having twins! Seeing twins at 6 weeks is definitely possible. The exact time twins can be detected depends on the type of twins, for example, if they’re identical (from one egg) or not.

At this stage, the presence of two yolk sacs can be seen, and separate heartbeats distinguished. An ultrasound with twins will show the babies as two dark spots in the uterus. 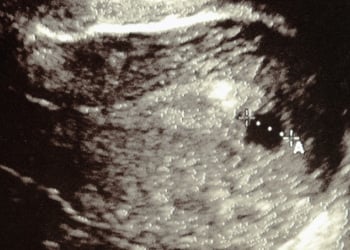 At this gestation, what the ultrasound technician is looking for is the size of a sweet pea.

Normally during a pregnancy ultrasound, a baby is measured by CRL (crown rump length). This means the length from the top of your baby’s head to his or her bottom – limb measurements are not included.

Don’t be worried if you can only see a small dark circle that looks empty. It’s very common for only the yolk sac to be visible at this early stage.

The size and presence of the yolk sac will indicate how your baby is growing, and if everything looks normal. 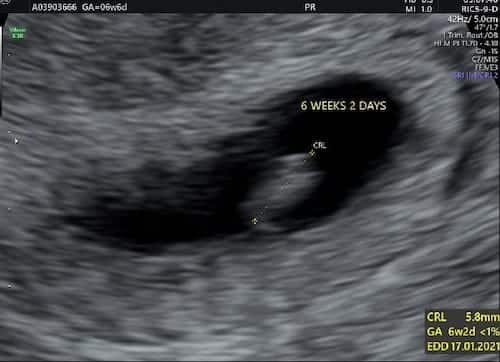 Your baby’s heartbeat on ultrasound

When you’re 6 weeks pregnant, it’s the earliest possible time you might see your baby’s heartbeat. But it’s not guaranteed to be detected this early. Especially if you conceived a little later than you expected, your baby’s gestational age might be less than you think.

Rest assured, if the technician notices anything concerning about your ultrasound, a follow-up ultrasound will be booked in the near future to provide more information.

If detected, your baby’s heartbeat would normally be between 90 to 110 beats per minute.

Your baby at 6 weeks

Right now, your baby will be around the size of a pea – between 5 and 9mm long. Your baby looks a bit like a tadpole but is developing at a rapid pace. The vertebrae is forming as are the internal organs.

So it might not look like a lot is happening from the outside but this development takes a lot of your body’s energy right now.

Find out more in our pregnancy week by week article, 6 weeks pregnant.

Miscarriage and the 6 week scan

Pregnancy loss may be on your mind.

Most miscarriages occur during the first 6 weeks of pregnancy. Quite often, a woman may not know she’s pregnant and has a miscarriage at the time of her expected period.

Once a fetal heartbeat is detected, the risk of miscarriage lowers. There are also certain factors which can increase the chance of being misdiagnosed, such as inaccurate dates for your last menstrual period, or a vanishing twin, when one twin miscarries while the other remains.

In almost all cases, miscarriage diagnosis at 6 weeks is hard to make and you will likely be asked to have another scan in a one or two weeks time.

Seeing no baby on the ultrasound

Seeing no baby (just a sac) could simply indicate the pregnancy isn’t as advanced as first thought. The gestational sac forms as soon as the egg is fertilized, and is the first structure to be seen on ultrasound. It can be seen via transvaginal ultrasound between 3-5 weeks pregnant.

The next positive sign of pregnancy is seeing the yolk sac. This develops within the gestational sac and provides nutrition to the developing embryo. This can be seen on ultrasound by 5 & 1/2 to 6 weeks gestation.

If there’s no gestational or yolk sac at the scan, it doesn’t necessarily mean no baby. It can mean your dates have been miscalculated. This can happen if you’re not sure of the date of your last menstrual period or have irregular cycles. Usually, your health care provider will want you to have another scan in 1 or 2 weeks.

If it’s important to know when your baby will be due, then the earlier a dating scan is done in the first trimester, the more accurate it will be. Remember, the date doesn’t predict the exact day your baby will be born – It’s an estimate only.

Some experts, medical professionals and organisations advise against early ultrasound unless there’s a medical concern. The United Kingdom’s College of Obstetricians and Gynaecologists released a paper advising all early scans before 10 weeks of pregnancy should only be done out of medical necessity.

Find out more in our article, early ultrasounds – are they necessary?

Toughening Up Nipples For Nursing – 5 Reasons NOT To Do It

Toughening Up Nipples For Nursing - 5 Reasons NOT To Do It