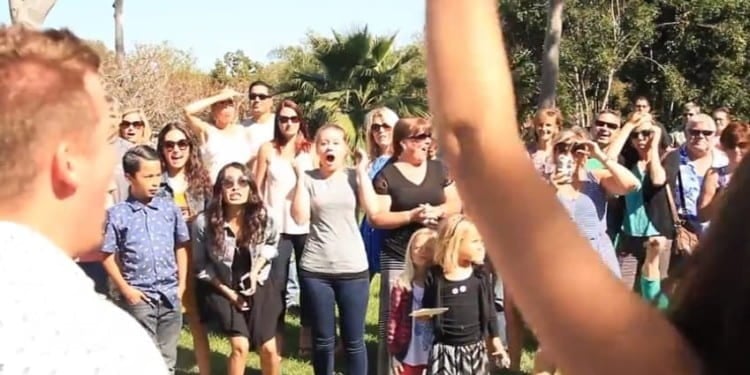 Expectant parents Desiree and Ryan Fontin surprised their friends at a long-awaited gender reveal party earlier this month. The couple, who have struggled with infertility for a long time, invited all of their loved ones over to find out the sex of their babies.

Desiree and Ryan are both twins, and were thrilled to find out they were expecting more than one baby. They told their friends and family that they were expecting twins. When the couple found out the sex of their babies, they decided to throw a party to share the news with their loved ones.

The lucky guests were expecting to find out the gender of the couple’s twins. After two cardboard boxes were opened to reveal two sets of blue balloons, a third box was brought to the party. At this moment, party guests were surprised and thrilled to find out that the couple were actually expecting triplets. The third box revealed a bunch of pink balloons, and guests can be seen screaming in excitement.

The couple, who said they have received lots of support from friends and family during their struggle with infertility, decided to throw the party as a way of saying thank you to their loved ones. Desiree’s mum and a couple of very close friends were in on the secret, but nobody else knew before the party.

Their beautiful gender reveal party, complete with a pastel colour scheme, loads of balloons and gorgeous sunshine was filmed and turned into a short video. The five minute short is beautifully edited and filled with emotion as this happy couple share the news with their family.

Expect plenty of screaming, heaps of cuddles and a lot of joy as this couple share their best kept secret with their friends and family.

9 Big Reasons Why Parenting Is In Crisis

9 Big Reasons Why Parenting Is In Crisis