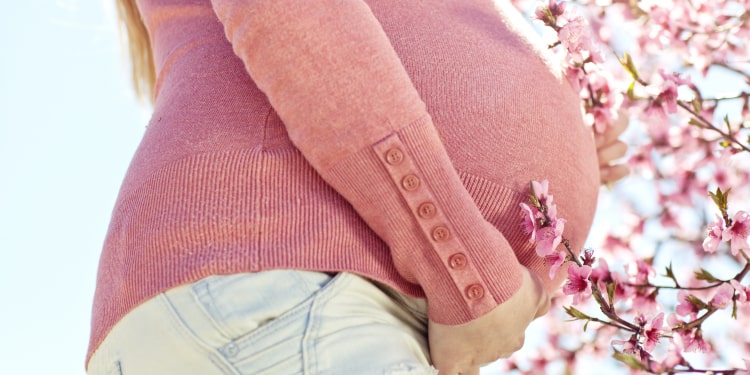 Colostrum is the milk breastfed babies get in the first few days after birth.

It’s a thick, yellow coloured substance, which is commonly referred to as “liquid gold” — and for very good reason.

It’s not a closely impending birth that triggers it’s production — a pregnant woman’s breasts start making colostrum from around week 16 of pregnancy.

At first, the thought of expressing colostrum before your baby is born may some absurd.

With no baby there to feed it to, what is the point?

After consultation with their doctor, midwife or obstetrician, some mothers express colostrum during pregnancy, in order to build up a supply of breastmilk (in this case colostrum). This is done to help reduce the chance that another form of supplementation (e.g. formula) gets used if the need for supplementation arises after the baby is born.

4 Reasons For Expressing Colostrum During Pregnancy

Here are 4 reasons why a mother might express colostrum during pregnancy:

#1: When The Mother-To-Be Has Diabetes

If a woman has diabetes (type 1, 2 or gestational), her baby is at higher risk of having low blood sugar levels after birth. Giving a baby extra colostrum that was expressed during pregnancy may assist with stabilising her blood sugar levels. Without expressed colostrum, and if baby is unable to breastfeed effectively, supplementation might be necessary.

#2: Conditions That Make It Difficult For A Baby To Breastfeed

There are certain conditions that can make it more difficult for a baby to breastfeed, at least early on.

Such conditions may include:

In such situations, a mother may need to support breastfeeding with expressing milk after birth. Having expressed colostrum pre-natally means that she’s had some practice with expressing. It also means she has a store of breastmilk, in case she needs more milk than she’s expressing.

There are some conditions that can make it more likely for a mother to have trouble making enough milk. For example:

Expressing colostrum pre-natally also means an extra store is available, should extra be needed in the early days following birth.

Worries about milk supply, warranted by medical concerns, can be a source of stress for new mothers. Knowing extra colostrum is available might help mothers feel less pressure as they establish breastfeeding and expressing.

#4: To Get Used To Hand Expressing

Hand expressing is a useful skill for breastfeeding mothers to know.

It can be helpful in situations where a baby isn’t attaching well to the breast in the early days, or when a mother has a blocked milk duct or mastitis.

Expressing colostrum pre-natally can help a mother to get practice at hand expressing and handling her breasts before her baby is born.

To date, there has been insufficient research done to ensure the safety of expressing colostrum pre-natally, particularly for high-risk groups such as women with diabetes.

Some research has shown a trend towards a higher rate of admission to special care nursery for babies born to mothers who expressed colostrum pre-natally as compared to those who did not express pre-natally.

Expressing (or breastfeeding) causes the release of oxytocin. Oxytocin is also the hormone that contracts the uterus. So the theoretical concern is that expressing pre-natally may contribute to a mother going into labour prematurely.

It’s likely that most women go into labour when nature decides the time is right but there may be some women for whom extra precaution is given (e.g. diabetic women who are already at risk of premature labour).

For these reasons, it’s important to seek advice from your doctor, midwife or obstetrician before expressing colostrum pre-natally.

A large trial is currently under way, called the DAME trial, which is due for completion in the near future. The results from this trial will provide evidence of the safety and efficacy (or otherwise) of the pre-natal expression of colostrum.