If you’re pregnant, you’ve probably heard about red raspberry leaf tea and its benefits during pregnancy, labour and in the postpartum period.

As its name suggests, it’s a herb derived from red raspberry leaves, which has been used medicinally for thousands of years, including amongst indigenous Australian cultures.

In the 1940s, western medicine practitioners began to use it as a tonic for the uterus during pregnancy and childbirth.

So, what are the benefits of drinking red raspberry leaf tea during pregnancy and is it safe? Here’s everything you need to know.

The most common question about red raspberry leaf tea is if it’s safe during pregnancy.

There’s a great deal of conflicting information about contraindications.

Nicole Tracy, a naturopath from Nurtured by Nature, says there are no known contraindications for red raspberry leaf when used in the third trimester at an appropriate dose.

If you’ve had a previous labour which has been really fast, it’s best avoided.

You should only use red raspberry leaf under the care of your naturopath or herbalist.

Red raspberry leaf tea is a herbal tea loaded with benefits, both nutritionally and functionally. It contains a rich assortment of vitamins including b vitamins, calcium, iron, magnesium and fragarine. Unlike black tea, it doesn’t contain caffeine. And of all the herbal teas, it’s one which tastes closer to black tea.

Across the world, red raspberry leaf is used to treat flu, diarrhoea and acne.

When taken during pregnancy, red raspberry leaf is said to aid the mother’s immune system, ease morning sickness and promote better circulation. It’s often used by women in the third trimester of pregnancy, as a natural means to have an easier labor.

Red raspberry leaf is believed to help strengthen uterine muscle, tone the pelvic floor in preparation for childbirth, as well as assist with breastmilk supply.

Studies have shown women who take red raspberry leaf have a reduced incidence of birth interventions.

Research has also found that women who drink red raspberry leaf tea regularly towards the end of their pregnancies had shorter second stages of labour (pushing stage) than those who don’t.

From one study published by Australian midwives in 1999:

“The sample consisted of 108 mothers; 57 (52.8%) consumed raspberry leaf products while 51 (47.2%) were in the control group. The findings suggest that the raspberry leaf herb can be consumed by women during their pregnancy for the purpose for which it is taken. That is, to shorten labour with no identified side effects for the women or their babies. The findings also suggest ingestion of the drug might decrease the likelihood of pre and post-term gestation. An unexpected finding in this study seems to indicate that women who ingest raspberry leaf might be less likely to receive an artificial rupture of their membranes, or require a caesarean section, forceps or vacuum birth than the women in the control group.”

More extensive research is needed. But with very little in the way of risks and such great benefits observed and recorded, red raspberry leaf tea is a great option for pregnant women.

Some women are under the impression red raspberry leaf tea will help to induce labor.

However, it’s more of a uterine tonic, helping to prepare the uterus for labor, rather than kick start labor.

See our article about natural ways to induce labor.

How should I take red raspberry leaf?

Lots of pregnant women choose to drink raspberry leaf tea which can be purchased at most supermarkets, health food stores or online.

It’s available in tea bags or as loose leaf tea – seek out organic, local tea from a reliable source.

When purchasing red raspberry leaf tea, beware of cheap imported teas which may be contaminated with other items.

If you’re not a fan of the flavour of the tea, you can also take red raspberry leaf in tablet form.

It’s also available as a tincture that can be added to water, juice or tea, but be aware that tinctures usually contain alcohol.

How much red raspberry leaf should I take?

It is difficult to be exact with dosages if you drink loose leaf tea, because it depends on how long you steep your tea, and the quantity you use.

The best way to prepare your raspberry leaf tea is to boil a cup of water, placing it into a teapot.

Put in a teaspoon of red raspberry leaf tea, then stir or swish it before letting it steep for ten minutes. When ten minutes is up, pour it into your favourite mug and enjoy!

The taste is a little bitter, so you may want to sweeten it with some honey or stevia.

You can have up to 4-5 cups per day of raspberry leaf tea in your third trimester, but have at least 2-3.

If you’re in your first trimester, one cup per day is fine.

Most women do not experience any issues after taking raspberry leaf tea, however the following effects are possible:

What about red raspberry leaf tea and VBAC?

Nicole says, “There’s often some confusion around raspberry leaf being contraindicated in VBAC births. This is most certainly not the case, and it does not increase the risk of premature labour or rupture of c-section scars. It’s wise for all women (especially those planning a VBAC) to take raspberry leaf tea, tincture or tablet form from the beginning of the third trimester, in gradually increasing amounts.”

Experts generally recommend not to start taking red raspberry leaf until you’re in your third trimester of pregnancy. If you wish to take it sooner, simply check with a trusted naturopath.

You can then continue to drink the tea (or take the tablets or capsules) until the end of your pregnancy.

If you choose to take capsules, follow the recommended dosage instructions on the label.

You can continue to drink this amazing tea after the birth too. This nutrient-rich herb can be continued for two weeks postnatally. It can assist with reducing blood loss, toning the uterus and supporting breast milk production. 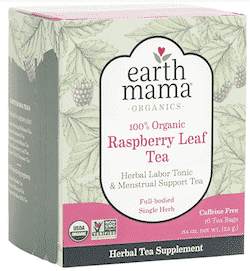 Prefer tea you can brew yourself? Try this top seller.