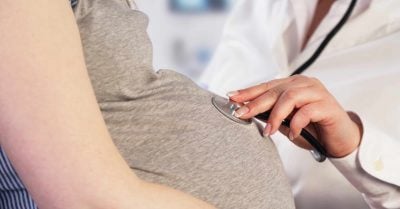 You know how it is. You walk across the carpet in your socks and touch the doorknob then … zap!

Static electricity is so common that we tend to forget it’s actually quite strange – especially static electric shock while pregnant.

Being zapped by static electricity is quite different from being shocked by electricity.

Electrical shock is caused by electrical current, and can cause serious injury or death (electrocution).

For some reason, static electric shock while pregnant seems to be more common. Why? Let’s find out.

Static electricity is scientifically known as triboelectricity. It was first described in the 6th century by Greek philosopher and mathematician Thales of Miletus.

For centuries, scientists struggled to answer the question: what causes static electricity?

We know friction has a part to play. Two objects rubbing against each other causes an imbalance of negative and positive charge.

Researchers discovered all surfaces have bumps and pits, called ‘asperities’. Smooth and rough surfaces have these imperfections.

If you zoom in, you can see them on fibres like wool or hair, and even on balloons.

When two objects rub together, their different asperities create friction between their surfaces. So wearing socks and shuffling your feet across carpet means electrons are transferred to your body.

“It’s weird but I’ve found during pregnancy I’ve been carrying a lot more static electricity. I constantly get those little shocks when I touch things, and when I brush my hair it frizzes out everywhere”.

Static electricity can build up in everyone, but static electric shock while pregnant seems to be more common. It definitely happens more common under certain circumstances.

During winter, static electricity is much higher because the air is cold and dry.

In the summer months, because hot air holds more water (humidity), the number of electrons you pick up is reduced.

Having dry skin is another cause of static electricity, especially if you wear or touch synthetic materials.

During pregnancy, you’re more prone to dry skin due to hormonal changes.

The combination of dry air, dry skin and synthetic materials is likely to cause women to experience more static electric shock while pregnant.

Is static electricity harmful to my baby?

Static electricity is reasonably harmless, but a higher build-up of static charge can cause a pretty painful shock!

The tingle you feel is your pain receptors signalling that electrons have rushed through.

Some people feel the shock more than others because pain is based on perception. If the discharge of electrons is large enough, you might even see a spark.

But is static electric shock while pregnant harmful to your baby?

The good news is static electricity can’t seriously harm you or your baby. Your body is mostly made up of water and that happens to be an inefficient conductor of electricity, especially small amounts.

Your baby is surrounded by fluid in your uterus. So baby is well protected too.

Why do I keep getting static shock?

If you look at the tips below, you’ll probably recognise a few things you do that lead to static electric shock while pregnant.

If you avoid them, you’re likely to experience fewer static shocks.

How do I stop getting shocked from static?

Static electric shock while pregnant isn’t harmful to you or your baby.

Even so, you’d probably like to be able to open doors in your house, or get into your car, without having to touch everything gingerly, anticipating your next shock.

You can’t eliminate all shocks. Nature is full of electrons. But you can certainly reduce their intensity and frequency.

Sometimes you can eliminate the reason for electron build up, other times just minimise the effects.

Either way, it helps to know how you might avoid static electric shock while pregnant.

You could try some, or all, of these tips:

If it’s winter, or if the air is very dry where you live, the easiest way to fix the problem is to humidify your home.

This gives the electrons the water vapour they need to roam, rather than build up.

Humidifiers can be reasonably cheap to buy and run. Just make sure you use them correctly and check for condensation and mould.

Use an anti-static spray on your clothes and furniture. This is a pretty simple and effective way to lower electron build up.

Dryer sheets are designed to throw into your dryer to reduce the amount of static electricity that builds up on your clothes. You can also rub them on your carpet or furniture.

Check the soles of your shoes. Rubber-soled shoes are basically insulators, which cause static electricity to build up with every step you take.

Wool is lovely and soft but it’s a very efficient conductor – much more efficient than cotton.

It builds up quite a static charge.You can often hear the crackle between your wool shirt and other fabrics.

Lift your feet when you walk! Avoid creating friction between your body and other surfaces. This will reduce the amount of friction and build-up of electrons.

What happens if you get an electric shock when pregnant?

There’s conflicting evidence about what happens if a pregnant woman experiences an electric shock (electrocution).

The effect of a shock delivered through an electrical appliance, appears to depend on how strong the electrical current, how long the shock lasted for, and the pathway of the current through the mother’s body.

Reports in the medical literature range from a mother feeling an unpleasant sensation, with no effect on her baby, to maternal and fetal death – immediately or within a few days.

After any electrical shock, even a mild one, it’s important to have observation and fetal monitoring.

Can being shocked cause miscarriage?

A static electric shock while pregnant won’t cause miscarriage.

An electrical shock, such as one caused by a faulty appliance, can have serious effects on you and your baby.

Always check your appliances are working properly, and have a qualified tradesperson do any electrical work needed around the home.

If you experience an electrical shock, let go of the source of the current as quickly as possible. Don’t move, unless it’s necessary to get away from the electrical source.

Call an ambulance immediately or, if you’re unable to, get the attention of someone nearby who can.

Even if the shock seems minor, it’s important to seek immediate medical assistance. Internal injuries can be hard to detect without a proper medical examination.

If you’re pregnant, you’ll also need ongoing fetal monitoring to ensure all is well with your baby.

How Late Did You Get Your BFP? (Positive Test)

Evening Primrose Oil To Induce Labor – Does It Work?

Evening Primrose Oil To Induce Labor - Does It Work?