What Does A Mucus Plug Look Like? Losing The Mucus Plug

Close to giving birth? You’re probably wondering, “what does a mucus plug look like?”

Many women are quite familiar with cervical mucus.

If you’re in the habit of tracking your cycles, you’ll know it changes quite frequently, based on where you are in your cycle.

Even if you have never tracked your cycles, you would have seen your fair share of discharge – especially during pregnancy.

But what does the mucus plug look like? Is it important to be able to distinguish it from typical pregnancy discharge?

If you’ve spent any time in pregnancy forums, chances are, at least a few times, you’ve seen ‘Is this my mucus plug?’ posts.

Why is there so much concern over whether or not the glob you see is your mucus plug?

It’s because the release of the mucus plug is one of the many signs labour could be on the horizon.

Firstly, here are some facts about what the mucus plug actually is.

What is a mucus plug?

As soon as a fertilised egg makes its way to your uterine lining, and is implanted, your body’s hormones start to rise and shift.

Eventually, these secretions form the operculum, also known as the mucus plug.

Rather than opening a bit – as it does when you have a period – after a fertilised egg has implanted, the cervix remains tightly closed.

The cervical mucus then forms a mucus plug to help protect the uterus and growing baby from infection.

As you near the end of pregnancy, the cervix begins to ripen. A ripening cervix is softening and preparing to dilate, to allow for the birth of your baby.

These cervical changes can cause the mucus plug to be released. If you are full term and labour is close, the plug will continue to release and labour will eventually begin – in a few hours, days, or even weeks.

If the plug is lost earlier in pregnancy, the body often regenerates the plug, to provide continued protection from infection for you and your baby.

Still unsure about the role of the mucus plug? Read Mucus Plug During Pregnancy – What Is It? to learn more about it. 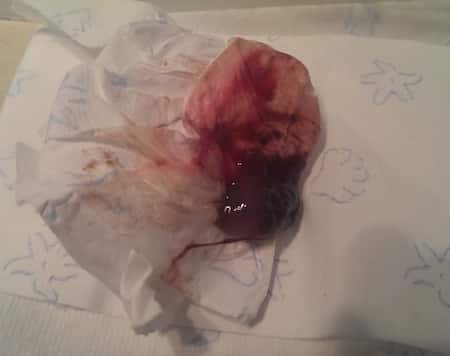 I remember hearing quite a bit about the mucus plug during my first pregnancy. I fully expected to notice when it was lost and to be aware of the potential start of labour. Much to my surprise, I woke one morning to my water breaking, and I had no memory of noticing a lost mucus plug prior to that.

In other pregnancies, I did notice the plug. In one case, it happened quite a bit before labour began. Probably my body created another, for added protection. In another pregnancy, labour began a couple of days after the plug was released.

But what does it look like and how can you distinguish it from other pregnancy discharge?

The mucus plus can come out in a large and mostly intact glob, making it easy to notice. Sometimes, however, it comes out slowly in bits and can easily be mistaken for typical pregnancy discharge.

Although it might seem important to notice when your mucus plug has come out, in the grand scheme of things it doesn’t really matter much whether you do or not.

Unlike ruptured membranes (water breaking), the release of the mucus plug doesn’t always mean labour should or will begin soon.

Do I Need To Call My Care Provider When I Lose My Mucus Plug?

Losing your mucus plug rarely requires a call to your maternity care provider. Occasionally, your midwife or doctor might tell you to call them if you think you have lost your plug – usually if you’ve been experiencing preterm labour or you’re at risk for preterm labour.

If your midwife or doctor hasn’t instructed you to notify them, simply let them know at your next prenatal visit.

If you have a doula, it’s also helpful to let her know so she has a heads up you might be heading towards labour. If it’s 2am, you don’t need to make the call as soon as it happens, but a quick message during normal hours can be helpful.

If you notice a foul odour, bright red blood mixed in, or greenish yellow discharge, you should contact your midwife or doctor to report it; they can let you know whether or not you should be evaluated.

Occasionally, a steady flow of discharge is mistaken for the mucus plug when, in fact, there’s something else going on. If at any time you’re uncertain about your wellbeing, or your baby’s, you should contact your maternity care provider.

At each prenatal, take time to ask questions about when you should call. Read up on pregnancy and labour. Take a comprehensive childbirth class. All of these things will help you understand the normal progression towards labour, as well as any red flags for concerns.

When does the mucus plug come out?

Like in so many aspects of pregnancy, there are many variables when it comes to losing your mucus plug. Some women never notice it, some lose it early and it regenerates, and some lose it shortly before or several days before labour begins.

Losing your mucus plug can be a sign labour is on the horizon. You might or might not notice it, and it’s rarely something you need to report immediately.

If you notice losing your plug, it’s one of the many signs you’re heading towards labour. If you don’t notice anything and you’re nearing or past your estimated due date, don’t worry. Nearly one in five women in our poll never identified their mucus plug coming away, and one in three lost it during labour.

The TRUTH About Natural Birth
MAXIMISE your chances of getting the birth you want… MINIMISE your chances of
a disappointing or traumatic birth experience. Learn from some exceptional educators – you’ll feel MORE CONFIDENT heading into birth.
CAN YOU HANDLE THE TRUTH? Click to find out…
Previous Post