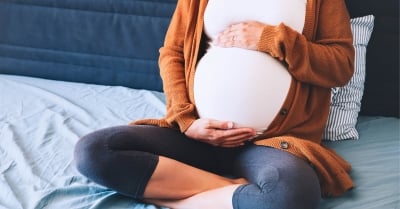 In the first months of pregnancy, your body creates a barrier between the world and your developing baby.

The mucus plug is something you don’t really think about, until you get to the end of pregnancy and start to look for the signs of labor.

What is a mucus plug?

Your cervix produces mucus all through your life. The mucus changes at different phases of your menstrual cycle.

During pregnancy, a thick mucus plug forms in your cervix to protect your body and baby from infection.

The plug is a collection of mucus that is jelly-like fluid. It accumulates in the cervical canal. The cervix is a canal of tissue that joins the vagina and the uterus.

The mucus has antibodies to protect your baby from bacteria, viruses and infections.

You might be surprised at how much mucus is collected in your cervix. That’s because the cervix continues to make the mucus.

It’s different from woman to woman.

It might be a jelly-like, stringy or even a sticky discharge.

The mucus plug can be tinged with pink, red or even brown.

This is usually due to small blood vessels breaking when the cervix starts to soften and thin out.

Find out more in our article, what does it look like when you lose your mucus plug.

Many women find cervical discharge (leukorrhea) increases during pregnancy. This discharge is normally white or creamy colour and has no odour.

More discharge during pregnancy can make it difficult to tell if what you’re seeing is your mucus plug.

Check out Discharge During Pregnancy – What’s Normal and What’s Not for more information.

Can you gradually lose the mucus plug?

Some women don’t even notice  their mucus plug because it comes out  when labour is well underway and they are too busy to notice it!

Some women see one obvious blob of mucus.

Other women just see an increase in mucousy vaginal discharge over a few days.

If you’re not sure what your vaginal discharge actually is, pop a sanitary towel on and keep an eye on the amount and colour.

You can show your pad to your healthcare provider if you’re unsure or have concerns. Don’t worry – they have seen all kinds of body fluids before and won’t mind.

Is this the same as the waters breaking?

No. Your baby is growing inside a double layered membrane inside the uterus. When those membranes break, your amniotic fluid will be released. People often call this the “waters breaking”.

The mucus plug is an extra layer of protection outside the membranes.

But the mucus plug can be quite watery, and when the waters break there isn’t always a lot of fluid released. So it could be hard to tell what’s happening.

Remember if you’re not sure what’s happening, put a pad on and contact your care provider for advice and support.

What happens after you lose your mucus plug?

The mucus plug coming away is a brilliant sign that your cervix is changing.

As your body prepares for birth, your cervix will start to thin. Thinning (or effacement) means the cervix can dilate when your uterus is contracting in labour. As the cervix thins and possibly dilates a small amount, the mucus plug can loosen and come away.

Labour might still be a few days away but it’s OK to get a bit excited. More on this later.

Losing the mucus plug could be a signal for you and your birth partner to slow down and take good care of yourselves.

Maybe put the last few things in your labour bag then chill. Your baby is coming soon.

Do I need to call my care provider?

While losing your mucus plug is exciting, it might be a while before labour starts.

However, you should call your care provider if:

Remember you can put a sanitary towel on if you’re not sure about any vaginal discharge.

Your care provider will be happy to advise if you’re not sure.

How long after losing your mucus plug will you go into labour?

A member poll in the BellyBelly forums showed:

Does it only happen once?

If the show/mucus plug comes out gradually it can seem like it’s happening more than once but it’s just more of the same.

The cervix makes more mucus regularly, so there can be a lot of mucus to lose!

But interestingly, many women will have another mucus show just before they are ready to push their baby out. It’s one of the signs of progress midwives are on the lookout for.

What do I do if I notice a mucus plug or “show”?

Losing the mucus plug is a sign that your cervix is changing and that’s brilliant.

If the mucus looks normal and you’re at full term you don’t need to do anything.

You can practice your breathing and relaxation techniques when early labour contractions start. This is great preparation for  relaxing in active labour.

If you tell friends and family things are happening they might want progress updates. This might make you feel a bit under pressure so it’s best to just tell your birth partner.

Get plenty of rest, eat well and stay hydrated. Finish packing your labour bag and chill. Good things are happening and labour is not too far away.

The TRUTH About Natural Birth
MAXIMISE your chances of getting the birth you want… MINIMISE your chances of
a disappointing or traumatic birth experience. Learn from some exceptional educators – you’ll feel MORE CONFIDENT heading into birth.
CAN YOU HANDLE THE TRUTH? Click to find out…
Previous Post

42 Weeks Pregnant – What To Expect This Week