When Can You See Baby’s Heartbeat On Ultrasound? 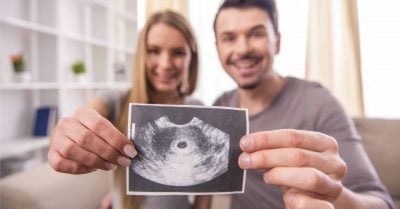 Seeing a positive pregnancy test can bring about a host of emotions, thoughts and questions. One question many mothers have is when can they see their baby’s heartbeat on ultrasound.

A positive test lets you know you’re pregnant, but seeing or hearing baby’s heartbeat often means the reality of your pregnancy will begin to sink in.

Every pregnancy is, of course, unique in its development, and each woman’s prenatal care will vary. For these reasons, each woman is likely to see or hear her baby’s heartbeat at different stages in her pregnancy.

When you see your baby’s heartbeat could depend on your maternity care provider’s typical prenatal care, your risk level in pregnancy, and the accuracy of dates in your pregnancy.

When can you see baby’s heartbeat?

A baby’s heart begins to beat around 6 weeks. Some women will have early ultrasounds to confirm pregnancy, or to check the location of the pregnancy if there’s any concern (e.g. vaginal spotting or bleeding). Some scans can detect a gestational sac around 4-5 weeks of pregnancy, but that’s still too early to detect a heartbeat.

Your pregnancy is dated from the first day of your last menstrual cycle. For many women, this means you’re 4 weeks at about the time of your missed period, and 6 weeks pregnant about two weeks after your missed period. This type of dating is based on averages, as many women ovulate about 14 days after the start of their last period, and expect a new period 14 days after ovulation.

However, the exact day of ovulation can vary from woman to woman and cycle to cycle. This means that this type of pregnancy dating is only an estimation.

Find out more about week 6 of pregnancy in our informative pregnancy week by week series.

Ultrasound machines can vary in technology. A mother’s size, the position of her uterus, the location of the baby, and the accuracy of dating can all affect when a heartbeat is seen on an ultrasound.

Even with all the variables, it’s very likely you will see a heartbeat by 7 weeks and extremely likely by 8 weeks of pregnancy.

While many mothers are able to see the heartbeat around 6 weeks, some maternity care providers prefer to wait until 7.5 weeks or more. By waiting until 7-8 weeks, it is less likely that a dating error could lead to not detecting the heartbeat in a healthy pregnancy.

Pregnancy dating is only an estimate, and doing an ultrasound just a couple of days too early can mean unnecessary concern and worry about not seeing the baby’s heartbeat.

What if they’re unable to see a heartbeat?

Early ultrasounds might be used routinely, or only when there are concerns. If you haven’t had any signs of a miscarriage and are less than 8 weeks pregnant, it’s possible that you’ve simply had a scan too early. If this occurs, your maternity care provider might recommend coming back in a few days or a week, to check again.

It’s important to know that pregnancy dating can be off by up to two weeks. If based on your last period, you’re 6 weeks along but you ovulated a few days late, it’s possible that the scan was just too early. Later in pregnancy, genetics takes over your baby’s growth, and your baby will be measured in terms of percentiles. So your baby may be on the 30th percentile or the 80th percentile, but still, be normal.

Unfortunately, if you’re around 8 weeks of pregnancy, and your dating is accurate, a lack of heartbeat usually indicates a miscarriage.

Are early ultrasounds safe or necessary?

Having an early ultrasound often depends on your maternity care provider, your personal medical history, and how your current pregnancy seems to be progressing. Many women don’t see their midwife or obstetrician until 8-10 weeks of pregnancy, and some health care providers prefer to wait until 13 weeks when the first trimester is complete.

While an early ultrasound can often detect a heartbeat, it isn’t absolutely necessary in a pregnancy that is progressing properly. If there’s concern about when you actually conceived (e.g. you’re still breastfeeding and haven’t had a regular cycle, or you were on birth control) a provider might want an early ultrasound in order to date your pregnancy. If you’ve experienced any vaginal bleeding or spotting, or have significant pain, an ultrasound might be performed to check on the viability and location of your pregnancy (e.g. checking for ectopic pregnancy).

Like many procedures and medications during pregnancy, large scale double-blind studies to prove the safety or risk of ultrasound are nearly impossible. For this reason, the FDA and ACOG recommend that only healthcare providers utilise ultrasound technology, and only as medically necessary.

Ultrasounds use sound waves to produce a picture on a screen. While this is a non-invasive procedure, these waves can cause the tissue to heat up. Where there is tissue heating, there’s an assumption that the heat might have an impact on cell development. While cell damage hasn’t been documented concretely, the potential is enough for the FDA and ACOG to recommend limited use. Some doctors recommend that unnecessary exposure to ultrasound (especially near the baby’s head) be avoided until 18 weeks.

In a routine and healthy pregnancy, it isn’t uncommon to have only one or two ultrasounds for the duration of the pregnancy. While some women opt out of all ultrasounds, many choose to have an anatomy scan midway through the pregnancy, and a few will have scans early in pregnancy, to check dating and viability.

Whether you have early ultrasounds or not is often a personal preference, combined with your personal medical history. It can be difficult to wait to confirm pregnancy in a more tangible way, but rest assured that early ultrasound isn’t necessary for your pregnancy to progress properly. Find out more about the risks of early ultrasound and doppler use in our article, Are Fetal Dopplers Safe?