When Do Pregnancy Cravings Start? 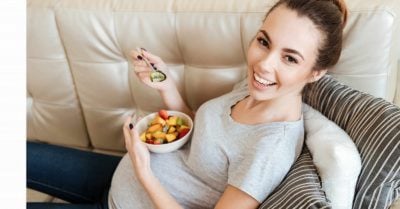 There’s actually a good reason for that.

Keeping up with every food craving can leave partners feeling exhausted.

Or perhaps you’re pregnant but they haven’t started yet.

So the question is: when do pregnancy cravings start?

When do pregnancy cravings start?

Studies such as this one say 50 to 90% of pregnant women experience pregnancy cravings.

This means at least half of all pregnant women have pregnancy cravings.

But maybe you’re pregnant but you haven’t started feeling any pregnancy cravings yet.

So when do pregnancy cravings start?

There’s no specific time you can expect pregnancy cravings to start.

Many experts agree that they usually begin in the second trimester.

Most experience pregnancy cravings in the second trimester. That’s not to say you won’t crave foods in the first trimester.

However, if you’re experiencing morning sickness, this might be less likely.

They tend to peak in the second trimester and be at their lowest point in the third trimester.

Pregnancy cravings are very likely to disappear completely after your baby is born.

Some women desperately want sweet things and some go for salty or fatty foods.

Cravings can even depend on the day or hour.

Experts suggest some reasons for pregnancy cravings might be:

However, no official reason has yet been found for pregnancy cravings.

There’s nothing wrong with indulging in your pregnancy cravings.

If you crave unhealthy foods, it’s a good idea to eat those foods in moderation.

For example, it’s not healthy for you, or your baby, if you eat pizza or ice cream for every meal.

Although it might be difficult, try to satisfy your food cravings in moderation and balance them with healthy foods, such as vegetables and fruits.

There’s no one thing that pregnant women crave.

Cravings can vary from normal things to the totally bizarre.

While one women can’t get enough of cereal or potatoes, another might want sauerkraut with sprinkles!

There’s a reason for the joke about pregnant women wanting to dip pickles in ice cream: some women really do crave some very strange things!

Although experts aren’t sure of the reasons behind this, it’s a good idea to exercise moderation if you happen to crave something that isn’t healthy.

Try to keep your health, and your baby’s health, in mind as you decide which foods to eat.

Some women crave ice during pregnancy.

Chewing ice cubes is a craving people can have even if they’re not pregnant.

It might seem harmless, and maybe it is, but it’s a good idea to be wary of craving non-food items.

One problem with craving ice is it has no nutritional value.

If you have cravings for ice and avoid other foods in order to eat ice, you might begin to have nutritional deficiencies.

It’s important to look out for your baby’s health, and this includes giving yourself (and your baby) the foods you both need.

Some experts suggest having cravings for ice can suggest an iron deficiency, even anemia.

That’s why it’s important to tell your doctor if you start to crave any non-food items.

Check out our article Eating Ice While Pregnant – Why You May Be Craving Ice for more information.

The pickles and ice cream combination is even more out there.

But what about even more bizarre cravings?

Pica is the condition of craving non-food items that have no nutritional value for you or the baby.

Cravings for ice are considered to be pica, although ice is one of the less extreme cravings involved in this condition.

Some common cravings associated with pica include:

It’s a problem when a woman has cravings for any of these things, or other non-food items, during pregnancy.

Other than the lack of nutritional value, they could cause harm to the mother or baby.

If you’re experiencing cravings for these sorts of things, it’s best to have a word with your doctor or midwife.

People experiencing this type of craving might have something going on in their bodies; this needs to be addressed.

Signs of pica should be looked for as soon as cravings start to appear.

Often pica can be corrected with supplementation of certain minerals.

Craving salt and sugar during pregnancy

There are other types of craving and aversions that might at first seem unusual or alarming.

An otherwise healthy person might crave things such as:

It’s important to keep an eye on what foods you’re craving.

An increase in the intake of unhealthy foods could lead to problems with blood sugar or even gestational diabetes.

Your doctor can give you advice on what foods you should be eating during pregnancy.

Some examples of healthy foods to replace unhealthy cravings are:

Craving salty foods isn’t a problem, but if you aren’t able to eat them in moderation, it’s a good idea to speak with your doctor so you can check for any underlying health issues.

Craving salty foods can suggest anemia, so it’s a good idea to get it checked out, just in case.

If you’re experiencing this, the good news is, it probably isn’t a problem.

Your body knows it needs plenty of nourishment and it’s simply telling you.

Vegetables and fruits provide you and your baby with many of the vitamins you need.

Problems might arise if you eat only salads, and no other nutrients such as protein or fats.

It’s easy to stick to a couple of foods, especially if you have aversions.

Sticking to vegetables and fruits only, though, means that you are avoiding other foods that give you essential vitamins and minerals.

You and your baby need protein, carbs, and fat. So make sure you keep to a balanced diet and include these types of foods as well.

When do food aversions start in pregnancy?

Some foods taste wonderful during pregnancy, but others just don’t do it for pregnant women.

Certain foods can lead to food aversions – the opposite of cravings.

Surprisingly, one of the most disliked pregnancy foods is meat.

There’s no known reason for this, but experts guess it might be a built-in aversion, as a way of avoiding certain unhealthy bacteria.

Meat isn’t a bad food to eat; just make sure it’s been properly prepared and cooked.

As well as asking, ‘When do pregnancy cravings start?’ you might also wonder, ‘When do food aversions start?’

Avoiding meat, or any other foods, is likely to start around the same time as cravings start.

This can be early in pregnancy or later.

Every woman is different, and might want or avoid different foods.

It’s a good idea to listen to your body, but also to be aware you need to keep it healthy.

You shouldn’t indulge in unhealthy foods too often, and you certainly shouldn’t avoid the healthy ones.

Enjoy your food-based cravings, but try to get every food your body needs. Balance is best!

How Much Does An EpiPen Hurt?

Victoria is a mother to one child and six cats. She began her journey in the birth world as a birth photographer, and has spent the last few years conducting research, writing, and speaking at conferences around the US. She is passionate about psychology and aims to bring the two subjects together to educate and improve birth conditions.