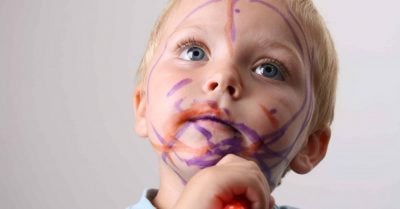 There are so many stages when your children can seem quite naughty – the terrible twos and the threenage years to mention some.

You find yourself saying ‘no’ a million times a day while redirecting, distracting, modelling, employing time-outs and more, only to find your little one doing the same thing over and over again.

Why are toddlers so naughty? Well the answer just might surprise you.

Certainly, there are times where a child is naughty. However, when it comes to toddlers, more often than not, they’re not really being naughty.

Here are 7 times their “naughty” behaviour is actually just normal:

#1: A tantrum that is really a meltdown

If you stop and think of the times your child tends to have a string of tantrums, it’s often during busy times.

A trip to the store after being at childcare or preschool all day. A tantrum at the dinner table after a string of errands, activities, and a visit from a family friend.

A totally embarrassing throw themselves on the ground level tantrum after you spent your vacation morning at the theme park.

In reality, these tantrums are often meltdowns – a reaction to being overstimulated and unable to handle how it makes them feel.

We live in a time of being constantly rushed, screens and sounds at every turn, crowded places and more. Even as adults, we feel rushed and overwhelmed. For our toddlers, these feelings can be too much to hold in. This is especially true if your child has a sensory processing disorder (SPD).

Even without SPD, little ones just beginning to explore the world can easily be overstimulated. The good news about these meltdowns? Your toddler isn’t being naughty. They aren’t attempting to manipulate you.

You can help limit overstimulation by planning ahead, give them breaks, and when possible try to have flexible outings with a break from too much stimulation.

#2: When your toddler doesn’t exhibit self-control

You just said not to throw the ball, what does your toddler do? Throw the ball. You ask them not to jump off of the couch and of course they jump.

While we need to establish boundaries and rules for safety, it turns out that toddlers simply don’t have much self-control.

They aren’t always trying to be defiant; they just can’t always control the urge to throw a ball, jump, grab that cookie they aren’t supposed to have. Why? Their brain isn’t mature.

The regions of the brain which are responsible for self-control aren’t mature at birth. They gradually develop and aren’t fully mature until the end of adolescence.

Most parents expect their three year old to be able to resist the urge to do something forbidden. However, research shows that most children aren’t capable of managing these impulses until around four years of age.

This doesn’t mean we ignore rules and boundaries until they’re older. It simply means we’ll need to remain consistent and have realistic expectations when they inevitably do something they’re told not to.

Please. Stop. Crying! It’s only a banana, it still tastes the same in two pieces!

Toddlers can have quite the dramatic displays of emotion. Sometimes you think they’re just being naughty or spoiled. You may think they’re being silly, attention-seeking, or just downright bad.

And while it’s possible for toddlers to exhibit really poor behavior, when it comes to emotions, they’re simply just figuring them out and haven’t quite mastered the ability to communicate their feelings.

We get quite frustrated, but we don’t jump up and down when we’re served an incorrect meal at a restaurant. Why? Because we have emotional regulation.

Toddlers can’t regulate their emotions. They’re just learning to communicate which can make articulating their feelings impossible. This leads to more frustration and dramatic displays of emotion.

Be sure to read Emotional Regulation – 5 Ways To Teach It To Your Child to learn more.

Hangry and slangry might be joking slang words, but they perfectly describe the feeling we get when we’re short-fused, frustrated and even emotional because we’re hungry or tired.

If, as adults, we can find ourselves losing our patience when we’re hungry and overtired, just imagine how much harder it is for a toddler.

While we shouldn’t ignore inappropriate behaviours, like hitting, we do need to have realistic expectations when our toddlers are hungry or tired. We can also help prevent these meltdowns by ensuring they’re getting enough nutritious meals and snacks, and adequate rest even on our busiest days.

This video went viral because not only does it illustrate toddler emotion, most of us can relate to how she feels when we’re hungry!

#5: An innate need to run and play

Nothing can make a parent ready to lose it quite like trying to get a toddler to sit still or be a bit serious. When you ask them to sit for the tenth time during dinner, it starts to feel like your child is just defiant.

Children’s bodies and minds are always developing. Even if they want to follow your directions, their body and brain are telling them to get moving. Why? That’s how their muscles and coordination continue to develop. Their innate need to play is also important for their developing mind.

We live in an era of long days and busy schedules. So often we have our children in tow and we want them to be serious and still. While children are capable of some serious and still time, it’s important to remember that if they’re not given enough time to be silly, play and move, we set them up to be “naughty”.

#6: Your toddler is responding to your emotions

When you’ve had a long day, didn’t get enough rest, and you’re feeling stressed, your children often pick up on your mood.

While it’d be lovely if they could simply notice we’re not feeling our best and be on their best behaviour, that’s not how it usually works.

While toddlers do mimic behaviours, even if you’re handling your stress well, it can still impact your child’s behaviour. In many ways, our emotions are contagious.

This doesn’t mean we should hide our emotion from our children, but it does give us an opportunity to model how to handle emotions. And it’s also important to remember this when our children seem to be acting out more.

#7: Responding to a lack of consistency

We all joke about how easy we had it as kids. What we tend to forget is just how frustrating life can be when you have little control over it.

A child doesn’t get to pick their diet, bedtime, or when he can go to the store and pick a treat. We can make this easier on children by allowing them to make choices, such as “do you want carrots or broccoli with dinner?” rather than decisions like having candy for dinner! But in situations where they don’t have choices, we can make it easier by being consistent.

Consistency isn’t always possible in every situation. When it isn’t, we need to remember that their response isn’t necessarily being naughty, it’s frustration from not getting what they expected.

Dealing with toddler emotions and behaviours can be exhausting and make for long days. However, when we have realistic expectations, we can make the days easier for both ourselves and our toddlers.

Be sure to read Your Baby’s Having A Hard Day Too for more understanding and a reminder that even on the hardest days, your child isn’t doing these behaviours on purpose.

Too Tired To Work Out? A Hot Bath Burns Calories Like Exercise, Study Finds

Too Tired To Work Out? A Hot Bath Burns Calories Like Exercise, Study Finds