Does Your Baby Junk Sleep? 4 Surprising Facts About Baby Sleep 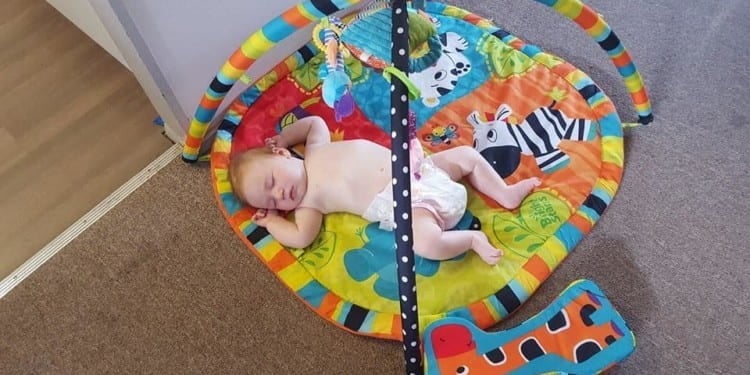 But according to one baby sleep “expert”, if your baby isn’t sleeping in their own bed and on a routine, they’re probably having junk sleep.

The book, first published in 1987 (republished in 2005), makes some pretty alarming statements, such as:

“WARNING: If your child does not learn how to sleep well, he may become an incurable adult insomniac, chronically disabled from sleepiness and dependent on sleeping pills,” which sets the tone of the book.

In Healthy Sleep Habits, Happy Child, Weissbluth preaches with authority and reassurance about his, “step-by-step regime for instituting beneficial habits within the framework of your child’s natural sleep cycles.”

Most self-proclaimed baby sleep “experts” don’t approve of babies sleeping outside their own cot, in a darkened room.

They deem sleep environments like moving cars, prams, baby carriers or a mother’s arms as not being able to induce quality sleep, leaving the baby unrested. So they may refer to it as inferior junk sleep.

Desperate for more sleep, many parents diligently follow advice found in baby sleep training books. They modify their lifestyles to ensure their baby or toddler is always at home in the correct place of sleep, at the correct times.

Sleep training is based on the theory in which babies need to be taught how to sleep, with their natural sleep patterns manipulated to conform to a modern ideal.

Popular in countries like the US, UK and Australia, teaching babies and young children to sleep anywhere other than close to their mother would seem a bizarre concept to most other societies around the globe.

Ironically, modern parents want their babies to adopt non-natural sleep behaviour, to enable them to have uninterrupted adult time in artificial daylight, which causes some of the chronic sleep problems which adults experience today. Another use of the term junk sleep is in reference to adults whose screen time immediately prior to – and after – going to bed for the night causes difficulty falling and staying asleep.

But does it really matter where your baby sleeps?

Is sleep quality just as important as quantity for babies and toddlers – and is quality affected by where they sleep?

What is the evidence behind the whole junk sleep theory for babies and toddlers, and does it stand up to scrutiny?

#1: Where Babies Sleep: A Global Perspective

While western sleep trainers and “baby whisperers” consider the inability to self-soothe as a fault needing immediate correction, those who study humans – anthropologists – look beyond the expectations of modern parents, and look at what is normal for babies. And they tell a much different story.

Throughout history, babies have fallen asleep at the breast, while being held or carried and while lying in bed with their mothers. And this is not only of historical interest – these practices are still considered normal infant care by the majority of human societies, as well as other primate communities.

Research tells us that 67% of cultures around the world share a sleep space with their children, with 46% of those sharing a sleep surface. Where children move from the mother’s bed to another sleep space in the same room (often shared with siblings or other family members) none do so in the first year of life.

Our hunter-gatherer past may be considered pre-history by European cultures. Yet, indigenous people continue to practice close physical contact during the day and co-sleeping with their babies at night, in continents and countries such as Africa, the Arctic, Australia, the Americas and Asia.

It’s traditional to co-sleep in many parts of Asia and the South Pacific, including Japan, where parents share bedrooms and beds with their children for up to 15 years.

In Indonesia, Balinese babies sleep with their mothers until they are three, and are carried on their mother’s back as they go about their daily work. Else they are passed to an aunt, grandmother, sibling or cousin to be carried. It’s unusual for these babies to be on the ground.

Italian babies do not have a bedtime, and often fall asleep before their parents put them down in their shared bedroom. In Turkey, breastfeeding to sleep is common, and babies are swaddled and rocked to sleep in cradles.

Babies are rhythmically lulled to sleep in baby slings, hammocks and cradles in most cultures. Lullabies are universal. Nomadic tribes space their babies, to allow for the carrying of children until aged four, when their legs are strong enough to keep up with the tribe.

It’s as normal, natural and necessary to settle babies and young children to sleep at the breast, with movement and close physical contact as it has been at any other time in human history. If you’d like to learn more about natural infant sleep from true baby sleep experts and researchers, read our article 6 awesome baby sleep experts worth following.

#2: The Hand That Rocks the Cradle… A Blessing Or A Curse?

The idea that any variation of a prescribed sleep regime will somehow result in poor sleep quality is an interesting one.

Sleep trainers claim environments like car seats, prams, baby carriers or mother’s arms don’t induce quality sleep and leave the baby unrested. Worse still, they say, these “sleep props” will create a baby dependent on them, and it enslave parents. Yet, in other parenting books, these very same things are described positively as “sleep aids” and are often suggested to help get a child to sleep.

Rocking a crying baby is almost instinctive: watch a toddler playing with a doll and he will rock, pat and shush just like his parents. Movement is often a guaranteed way to gently help a baby or toddler to drift off to sleep – and research has shown this is not accidental. A human infant is hard-wired to calm and stop crying when held closely and rocked. The rhythmic movement of rocking and patting replicates the experience of the womb. And when your arms aren’t available, the stroller, baby carrier or a drive around the block will still produce a calming effect.

Mothers are often told it’s bad to breastfeed their baby to sleep. Some baby trainers even suggest waking the sleeping baby to lay her in her cot or crib, to self-settle back to sleep. But is nursing to sleep really as bad as they claim? The answer once again lies with both nature and science.

The Kung people of Africa parent their babies very differently to those in western cultures. They keep their babies constantly in contact with their mother, and breastfeed as many as three or four times per hour. These babies doze back to sleep quickly and easily. Crying for a feed is not normal in their culture.

Breastfeeding is designed to comfort a child and prepare them for sleep. Sucking releases a hormone called cholecystokinin (CCK) in mother and baby, making them both feel sleepy. This makes for a great napping opportunity for the mother too, especially if she learns to breastfeed safely lying on her bed. Breastmilk also contains sleep-inducing hormones, amino acids and nucleotides.

Many sleep trainers caution against babies sleeping in stimulating environments, because their sleep will be disturbed.

In looking at this, it helps to understand the normal infant sleep pattern, and how it differs from that of older children and adults.

Babies actually have a very basic sleep cycle compared to the fully matured adult one. They have just two sleep stages – active and quiet – and a complete sleep cycle is 40-60 minutes long.

By contrast, an adult will spend time in several different sleep stages, including long periods in deep sleep and time in REM sleep (when dreaming occurs).

When babies first fall asleep, they spend time in the active sleep stage — a light sleep stage of around 20 minutes — when they are easily disturbed. About halfway through the sleep cycle, they move into quiet sleep, which is deeper – meaning they are less likely to awaken from stimulus.

At the end of the active stage, it’s normal for a baby to wake, either slightly or fully, and need support to move into another sleep cycle (or to wake for a feed). The environment the baby is sleeping in is unlikely to have much of a role in this natural waking. Rather, it’s the baby’s immaturity which prevents him from returning to a sleep state after becoming awake. This is something which comes with time, most likely as the stages of sleep mature, and less time is spent in the lighter REM sleep – when waking is most likely, and the overall cycle stretches out.

Adult sleep cycles of 60-100 minutes don’t begin to appear until around school age. Throughout the early years, children spend significantly more time in light REM sleep – 50% of total sleep in newborns and 30% in three year olds, compared to just 20% in adults. It’s thought this time in lighter sleep is protective against SIDS.

As with everything else, your baby does not behave like an adult — because she is not one. Her sleep behaviour is designed to meet the needs of her rapidly developing brain. She wakes because she’s ready for more food, more stimulation, or more connection – not because she has been sleeping in in a poor sleep environment.

At the end of the day, what matters is a mother and baby’s happiness. If your baby is getting the sleep she needs, you’re more than likely getting it right. If her sleep mostly happens outside the nursery and that carefully-selected top of the range cot, it’s still sleep.

There is no such thing as “junk sleep” and no evidence supports the theory in which babies need isolation and darkness to sleep well. In fact, human history tells us that mothers have always kept their babies close and helped them to sleep at the breast and in their arms.

Does your baby junk sleep? Send us your junk sleep photos at [email protected] and we might feature them on our Facebook page! Don’t forget to post your images with the hashtag: #junksleep. Let’s start a junksleep revolution!

How Often Should I Feed My Baby Formula? 3 Things To Know

Why Diet Is A Significant Cause Of Gestational Diabetes

Why Diet Is A Significant Cause Of Gestational Diabetes