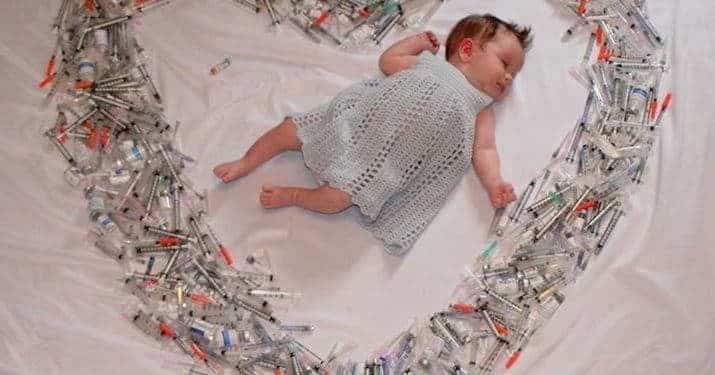 A photo went viral last week after causing quite a stir in the IVF community.

The beautiful photograph shows an adorable baby girl sleeping within a love heart made of syringes.

The syringes represent those used by her mother during the 18 months of IVF treatments it took to conceive her daughter.

The heartwarming image was shared by Sher Institutes on their Facebook page, and was credited to one of their former patients, Angela.

Speaking to ABC News, the baby’s mother explained, “The needles were the easy part. It was the emotional struggle, the ups and downs, that really took a toll,” she said to ABC News.

“I’m single and waited a long time for a husband to come. And then by that time it was difficult to get pregnant.”

The image has been shared thousands of times, made news across the world and, most importantly, encouraged others to share their IVF journeys. Commenters from all over the world shared photographs of their children conceived through IVF, and others offered words of encouragement to those still on their journey.

“I Saw Tears Form In His Eyes”

One commenter wrote, “Didn’t even tell my husband what this was, I just handed him my phone. I saw tears form in his eyes as he probably also went through the memories of countless nights, over our four-year journey, that he gave me shots. We finally were successful with twin boys and I’ve never been happier!”

Another commenter added, “My IVF twins are now 13. They were worth every injection, every procedure, every mile driven to the fertility clinic!”

Another commenter shared a success story, “I don’t remember the pain of any one of my shots but I remember the doctor telling me I was going to be a mommy. I love my twin girls. Congratulations on your little girl.”

The photograph doesn’t even contain all of the syringes used during the 18 months of IVF cycles, showing just how much work is involved in having IVF. It can be a long and stressful journey, and one certainly filled with ups and downs.

Though the use of IVF is becoming more common, it’s still not something you hear about all that often. Though people may tell you they used IVF, it’s rare for them to share the details of that difficult journey. This photograph not only highlighted the struggle many couples face, it also gave them a place to share their journeys and receive support.

It’s also a gorgeous keepsake for the mama, allowing her to honor and celebrate the time and effort that went into having her daughter. IVF isn’t easy, and success stories definitely deserve to be celebrated.

Want to know more about IVF? Find out how it works by watching this awesome video.

Watch This Awesome Video Of Babies ‘Singing’ In The Womb

Should You Love Breastfeeding All The Time?

Should You Love Breastfeeding All The Time?