Childbirth Across The Last Century 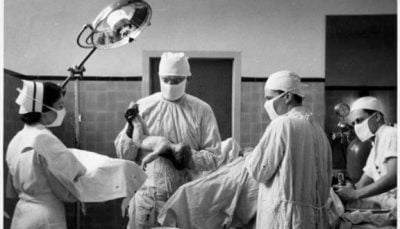 The physical act of birth might not have changed since the dawn of time, but the practices surrounding birth definitely have.

Little is known about childbirth practices before recorded history. We can guess that most women gave birth wherever they were – either in their home or, if they were nomadic, in a special tent or hut. Ancient images and texts show how birthing women were supported to give birth in an upright position.

In ancient communities, women were supported by other women during labour and birth. In each community there might have been least one woman who had experience with birth; these were the first women to be what we know as midwives. A successful birth might’ve relied on the skill and experience of the midwife or other support.

Birth was the exclusive domain of women; men were not invited or welcome. It was a woman’s rite of passage into motherhood and often several generations would be present at the birth of a new baby. In this way, young girls were aware of birth long before they experienced it personally.

The last century has seen incredible changes in the way birth is viewed, and in the practices surrounding it. Here’s how it has unfolded over the past one hundred years:

1900s – Most women were still giving birth at home, as hospitals weren’t widely available and were generally for sick patients.

The lower classes usually had a midwife in attendance, while the wealthier classes opted to have a doctor. Anaesthetic had been used during surgery for some time, but was rarely used on women in labour.

The maternal death rate remained high for the next three decades, mostly due to poor obstetric education and birth practices. Most of these deaths were preventable.

You can read more about Why So Many Women Used To Die In Childbirth.

1910s – Most babies were born at home, with a midwife or a doctor in attendance; for wealthier women, private maternity hospitals had came into vogue.

In the middle of this decade, Twilight Sleep burst onto the scene, paving the way for a change in birth practices, most of which are still with us today.

Twilight Sleep meant women had to be restrained during labour, so they couldn’t hurt themselves, or fight staff. When the baby was about to be born, a generous episiotomy was cut and forceps were used to pull the baby out. To assist the birth, fundal pressure was also applied, and the baby would need oxygen because of the impact of the drugs used.

1920s – Thanks to Twilight Sleep, which brought birth into the domain of doctors, the majority of women went to hospital to have their babies.

Leading doctors argued childbirth was a pathologic event, destined to damage women and their babies. This led doctors to believe normal birth was rare, and each labour needed active management and interventions to prevent problems.

These interventions included routinely dilating the cervix, cutting episiotomies, using forceps to birth the baby, and manually extracting the placenta.

Childbed, or puerperal fever, was still very much in evidence in these first decades of the 20th century. During the 1920s, half the maternal deaths in the United States were the result of puerperal fever. The cause? Unhygienic practices of doctors.

1930s – During this decade death rates started to fall, with the introduction of sulfa antibiotics, which acted against the streptococcal bacteria responsible for most cases of puerperal fever. Doctors finally began to recognise the part they played in spreading the infection, and began to wash their hands and practise more stringent hygiene.

75% of women still gave birth in hospital, with the full list of interventions and anaesthetics. They were beginning to complain about the after effects, however, and the fact they couldn’t remember anything about their babies’ arrivals.

1940s – Medical training improved and doctors began to abandon some of their more dangerous practices. In the mid 1940s, Grantley Dick-Read published Revelation of Childbirth (later retitled Childbirth Without Fear), which brought the benefits of normal birth into the limelight.

Women’s nutrition and health improved, ensuring fewer problems caused by dietary deficiencies, such as rickets. Maternal mortality rates had fallen, and the baby boom was about to begin.

1950s – About 90% of women gave birth in hospitals, but they were becoming more aware of the problems associated with heavy anaesthetic during labour. Evidence of the shocking side effects of the medications used also began to emerge. National health organisations started to focus on pregnancy and birth as normal and healthy processes.

The growing women’s movement took up the cause and set the stage for the natural childbirth movement. There was strong public opinion that women, not their doctors, should be in charge of their birth experiences.

Despite this growing awareness, discussions about birth were still taboo, and many first time mothers had little idea of what to expect. They gave birth lying flat on a hospital bed, often with ether masks over their faces, and their feet and arms strapped to stirrups. Episiotomies were still common, and babies were whisked away almost immediately after birth.

1960s – During this decade, almost all babies were born in hospital. With increasing focus on natural childbirth, women were expected to attend antenatal classes to learn about relaxation and methods for coping with pain.

Regardless of the focus on natural childbirth, women still experienced active management of their labours. Routine procedures included having their pubic hair shaved, and being given an enema and an IV.

It was standard practice for women to give birth in a hospital bed, lying flat on their backs with their feet in stirrups, and strapped to a fetal heart monitor, which had been invented around this time.

Doctors often asked women whether their contractions were painful, and if they admitted it, they were given a shot which knocked them out.  Lying unconscious on the back does little to help dilation, so c-sections were also common.

Fathers were allowed into the labour ward – usually just for the first stage of labour – to offer support and encouragement. If they were able to stay for the actual birth, husbands had to remain at the head of the bed.

1980s – The majority of women were likely to give birth in hospitals, but they had more options than women of previous generations. Many chose birthing rooms, instead of labour wards and delivery rooms, and birthing centres and homebirths were in greater demand.

Epidural were still used in more than 50% of births. Routine practices included shaving and giving enemas, and women would have a shower or bath on admission to hospital.

1990s – Finally, women began to have some say in how their birth experiences would unfold. The natural childbirth movement surged forward, and women were more informed about birth than ever before, thanks to birth education being more accessible. This enabled women to question and challenge past practices. Doulas, or birth support attendants, and women who provided non-medical support during labour, appeared on the scene.

Most women expected to have a normal birth, but most didn’t. Hospitals were still the main setting for birth, and the use of technology was common, even expected. Artificial rupture of membranes, induction or augmentation, epidural and episiotomy were considered to be normal aspects of birth in hospital. C-section rates were skyrocketing, and vaginal birth after a c-section was out of the question.

2000s – Hospital was still the most likely choice of birth setting for most women, but home birth was beginning to regain ground as a safe option. Active birth was not just a catch phrase, and a growing number of women sought midwifery care to avoid highly interventive births.

C-section rates peaked, notably in high income countries with access to excellent medical assistance. Women waited longer to have their first babies, and were subsequently told they were at higher risk for complications during labour.

2010s – In this decade, women are still more likely to give birth in a hospital, but they have more options for maternity care – particularly midwifery models of care. There is greater awareness of homebirth, due to extensive studies demonstrating its safety for mothers and babies.

The vast majority of childbearing women will aim for a normal birth, and will have access to a wide range of childbirth education classes. However induction rates in many countries are around 20-50%, and c-section rates are higher than the World Health Organization’s recommended 10%.

Today we know more about the benefits of undisturbed labour, but the settings in which women give birth do not facilitate this natural process. Doulas are considered an important addition to the birth support team, and partners are expected to be as informed and involved in the birth experience as possible.

Estimated Due Dates And The Myth Of The 40 Week Pregnancy

Estimated Due Dates And The Myth Of The 40 Week Pregnancy