Doctor Assists At Birth Hours Before Giving Birth Herself

It can take a long time to be induced.

Some women wearily fill in crossword puzzles, others listen to music on their headphones and some read books.

Doctor Assists At Birth Hours Before Giving Birth Herself

One inspiring mama even took her psychology exam during labour so she wouldn’t have to delay her studies. Anything to fill the hours of waiting.

One mama-to-be from Kentucky found a rather unusual way to keep herself entertained when she was in hospital waiting to be induced.

The pregnant patient, Amanda Hess, who just also happens to be a Kentucky OBGYN, didn’t just give birth to her own baby but also supported another patient as she welcomed her own baby on the ward.

Hess had just checked into her room at Frankfort Regional Medical Center when she heard a commotion down the hall.

Nurses were preparing to help out a mama whose baby was showing signs of fetal distress. The patient’s OBGYN was on the way, but the baby couldn’t wait.

Hess, who was on maternity leave, quickly donned some splash boots and an extra hospital gown to cover her backside and made her way down the hall to help the mama-to-be in need.

Hess found the woman was fully dilated and ready to push, so she stepped in and helped out to ensure the baby’s safe arrival.

The birthing mama, Halliday Johnson, reportedly had no idea Hess was on the ward as a patient, assuming she was still working, though her husband had noticed the doctor’s unusual attire of a hospital gown.

The patient’s OBGYN didn’t make it in time but, luckily, Hess supported the mama during the birth of her healthy baby girl. After the birth, Hess didn’t have much time to spare before her own contractions kicked in. She welcomed her second daughter later that night. 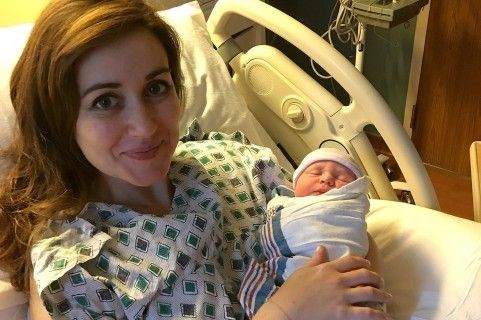 For most women, one birth is more than enough for one day, but not Dr. Hess who was more than happy to step up and help out while actually a patient on the maternity ward.

This Dad Wants Strangers To Stop Touching His Baby [VIDEO]