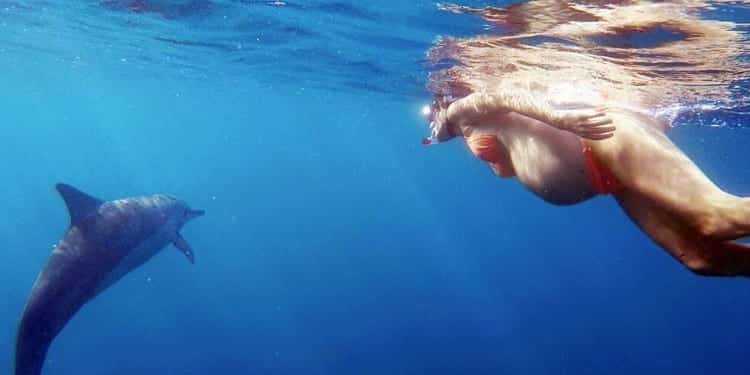 While the idea of giving birth in nature might be appealing to some, many would likely agree that there are things – or animals – that just shouldn’t be involved with birth.

In a brand new documentary for Channel 4, television host and mama, Katie Piper will be meeting mums-to-be who are pursuing extraordinary births.

The programme, which airs tomorrow night in the UK, features a strong bodybuilding mama, a heavily pregnant professional dancer and a couple hoping to have a lotus birth.

We all know every birth is a unique experience, as is every woman. A birth that feels right for one woman might feel wrong for another.

But is involving animals a bit too unique?

The expectant couple run a healing centre in Hawaii, and are big believers in the healing powers of nature. Mama-to-be and spiritual healer, Dorina, wrote on her website: “In 2011 and 2014 I had the privilege to learn from and with wild and free dolphins and Humpback whales in Hawaii who transformed and healed me in a very profound way. I felt deeply called to spend two times three months in nature – mostly by myself – and to deeply connect to this magical place of beauty and transformation inside and outside which called me home.”

Katie Piper, who opted for an elective c-section when she gave birth to her daughter last year, has developed a fascination with birth. She told The Times, “I found the dolphin people a bit out there but they seemed happy and the woman was so relaxed.”

Will We Really See ‘Natural’ Births On This Show?

This program is clearly another in a long line of ‘reality’ documentaries that attract audiences with ‘wacky’ births. People are fascinated by birth, and that’s why millions of people tune in to watch One Born Every Minute each week.

These sorts of programs exploit and twist birth to make it entertaining for audiences. Couples who choose to do anything other than give birth on their backs in a hospital room are portrayed as risk takers. That said, I definitely don’t ever want a dolphin as a midwife. And much as I hate these shows that exploit childbirth, I’ll definitely be tuning in. Sigh.

Extraordinary Births will air on Channel 4 at 10pm tomorrow night in the UK.