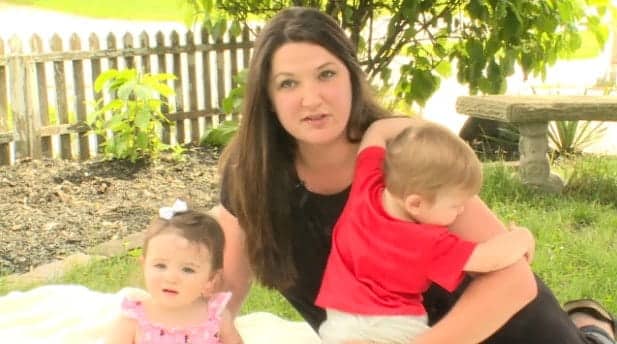 Would you breastfeed a baby who wasn’t your own?

Could you do it for a close friend — or perhaps a sister?

That’s exactly what Mila Valli, a Canadian mother of one, did. She assumed breastfeeding duties when her sister, Erica, suddenly fell ill. The illness left Erica in a coma.

Mila had no hesitation in breastfeeding her sister’s baby,

This extraordinary act of kindness and love is one that will no doubt touch the hearts of breastfeeding mothers around the world.

Mila has a 17 month old son, and will breastfeed her sister’s 10 month old daughter until her sister recovers. Her generous offer was an alternative to feeding the baby formula.

Mila, who is based in Windsor, Canada, told CBC News, “We have both cared for each other’s children. This obviously was a little bit different. It was a solid week for me, with both little ones; it was the first time we ever had that happen.”

The baby’s grandmother, Mila and Erica’s mother, told CBC News in an interview: “My daughter, who became ill, wanted to continue breastfeeding, so my [other] daughter said: ‘Right, I’ll take over, we’ll look after the little one until Erica, (the sick one), can come back and take over again’.”

Mila expected this unconventional act of kindness to be met with hostility, but was relieved to receive plenty of support when she opened up to a mothers’ group.

It might be a little unusual by modern standards, but such a gesture is a beautiful token of sisterly love.

For a mother determined to continue breastfeeding her child into toddlerhood, this gift keeps the option open, despite her sickness. What an amazing sister!

Wet nursing, or breastfeeding another person’s child, has been used throughout history where mothers have been unable to breastfeed their own babies. Wet nurses were once employed by women in the upper classes, in the hope of allowing the mother to fall pregnant again sooner.

These days, parents who choose not to breastfeed (or are unable to), are more likely to give their babies formula milk.

Other parents choose to use donated milk as a way of ensuring their baby still enjoys the various health benefits of breast milk.

Here are 7 things you need to know about toddler formula.