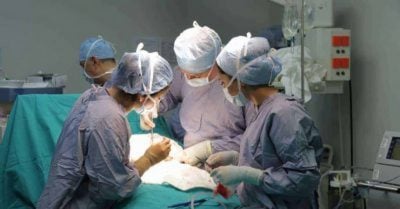 A c-section birth that ensures the best outcome for a mother and her baby when a vaginal birth isn’t possible is a wonderful advantage of modern obstetrics.

A c-section birth that occurs for other reasons puts a mother and her baby at unnecessary risk – a view based on current evidence and professional guidelines.

Because of the associated short and long term risks, the high, and rising, rate of c-section birth is a public health concern.

According to the World Health Organization (WHO), a national c-section rate of about 10% and no more than 15% demonstrates appropriate access to c-sections when needed, without a high number of unnecessary c-sections.

Recently released data from the Western Australian Department of Public Health show c-sections are steadily rising. In 2008, the c-section rate was 33.3% – a figure already well above the WHO recommendation.

US obstetrician and researcher Dr. Neel Shah found birth setting to be one of the most important factors in determining whether women had a vaginal or a c-section birth.

Why Are C-Section Rates Increasing?

If evidence shows high c-section rates to be of such concern, why are rates still rising? There are many theories, but most likely there’s a combination of factors involved.

Former president of the Australian Medical Association, Michael Gannon, spoke with ABC Radio Perth about his theory: “One of the drivers for the high caesarean rate is the older age at which woman have their first birth — their mean age is in their 30s”.

Whether a c-section is medically necessary, simply based on a mother’s age rather than how her pregnancy is managed by her providers, is something that needs further research.

To learn more about how management, and not a mother’s age, might have more to do with pregnancy outcomes after 35, be sure to read Pregnancy After 35 Has Minimal Risk, Study Says

Maternal obesity, and an increase in pregnancies achieved via IVF are also cited as possible causes of increased c-section rates. Although some sources see a correlation between maternal weight, reproductive assistance and pregnancy outcomes, correlations don’t necessarily equal causation.

Do these risk factors directly affect the birth, or is it the way they are managed that increases the risk of c-section birth?

As mentioned above, Dr. Shah’s findings suggest the place where a woman gives birth has a direct impact on her risk of giving birth via c-section.

If location affects outcome, then how labour is managed must be a major factor in c-section rates.

Childbirth educator, registered midwife and mother of four, Pip Wynn Owen, said, “We’ve seen a shift since the 1950s, when we started looking at births and said all woman had to birth in exactly the same way … we’ve narrowed our definition of normal.

“Our culture [doctors and midwives] has become [one that is] not comfortable with just letting women birth the way their bodies want to”.

Instead, continuous fetal monitoring has been associated with a drastically increased risk of c-section.

To learn more about the role of electronic fetal monitoring and the risk of c-section, you can read US Women Have Too Many C-Sections, With Too Much Risk

Why Are High C-Section Rates Of Such Concern?

As mentioned, c-section birth carries short and long term risks for both mother and baby. When c-sections are necessary for the safety of women and babies, the benefits outweigh the potential risks.

When c-sections are elective, mothers and babies are put at increased risk of complications – risk that does not outweigh the benefits.

A c-section rate of 10-15% is ideal, based on the evidence. When some regions have c-section rates well over 30%, it means more than half of all c-section births are putting women and babies at unnecessary risk.

Short term risks to mothers include:

Long term risks to mothers include:

You can read What Are The Risks Of C-section For The Mother? to learn more about the short and long term risks of c-sections.

Short term risks to babies include:

Long term risks to babies include:

You can read more about c-section risks in What Are The Risks Of C-Section For A Baby?

There’s no doubt c-sections can and do save lives, but they aren’t without risk. When a vaginal birth is possible for mother and baby – which, as research shows, is 85-90% of births – it is the safest option for both mother and baby.

Your choice of provider and birth facility will greatly affect your birth outcome. Choosing a provider who practises evidence-based care will reduce your risk of an unnecessary c-section (not to be confused with a medically necessary one).

Be sure to read Who Cares? Maternity Care Options For Australian Women to learn more about your birth options in Australia.

You can reduce your risk of a c-section,  despite the alarmingly high rates in WA.

New Zealand's Minister For Women Cycled To Hospital To Give Birth