It’s often said that you can’t predict when a baby will be born.

One new mother certainly discovered this when her baby was born in China last week.

The new mother’s birth has gone viral after a video emerged of the dramatic moment her baby was born on a crowded high street.

The woman was standing up in the middle of the street when her baby arrived somewhat unexpectedly.

In the short video clip, the  woman, from China’s Guangdong Province, can be heard screaming as her waters break.

Wearing a maxi dress, the mother hunches slightly as onlookers try to figure out whether she’s ok.

Her newborn emerges from between her legs moments later, and drops to the ground as the woman stands in shock.

The clip shows the baby moving on the ground. 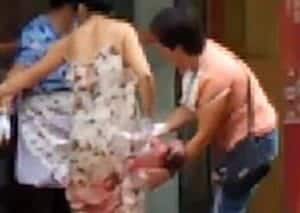 Thankfully, quick thinking shoppers called an ambulance, and nurses arrived minutes later to cut the umbilical cord and check both mother and baby were ok. 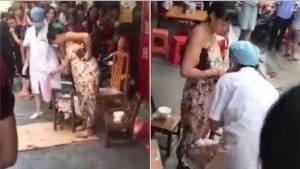 The unnamed mother and baby are presumed to be doing well, after being seen by paramedics at the scene.

Not surprisingly, the mother seemed to be in shock.

Declining a trip to hospital, the brand new mama was photographed walking home – carrying her groceries, and her newborn baby.

Her partner probably had quite a shock when she arrived home, after just nipping out for some fresh fruit and vegetables, with a new baby in tow.

Mayim Bialik Gets Real About Smacking

10 Ways You Know You’re In Your First Trimester

10 Ways You Know You're In Your First Trimester