Why The Elle Breastfeeding Cover Photo Is A Big Deal

The June issue of Elle Australia features model and mum Nicole Trunfio breastfeeding her son, Zion. The photograph is due to appear on the subscriber edition of the magazine. The gorgeous photo shows the model in designer clothes, nursing her four month old son.

The breastfeeding cover wasn’t pre-planned, but happened naturally when four month old Zion needing feeding partway through the shoot. When those working on the shoot saw how beautiful Nicole looked while breastfeeding Zion, they asked her to move back onto the set, so they could continue shooting.

The magazine’s editor in chief, Justine Cullen, told Fairfax media the cover was a “celebration of motherhood and style”. Nicole Trunfio told Elle Australia the photograph represents a “special moment where my worlds have collided.” When the model saw the cover, she is reported to have teared up at the beautiful image.

Why The Elle Breastfeeding Cover Photo Is Such A Big Deal

The cover might have left Nicole with a tear in her eye, but it’s not just an important cover for her. This is a big deal for mothers and babies everywhere. In an era where breastfeeding photographs are routinely banned from social media for being ‘offensive’, this cover goes some way towards normalising breastfeeding. Breastfeeding isn’t offensive. It is normal, natural and beneficial to both mother and baby. The magazine cover goes someway to dispelling the widely held view that breasts are sexual things that need to be hidden away (unless they’re on the front page of men’s magazines to make profit… that’s totally fine); they are for feeding babies, and there is nothing more natural than that.

Some women give up breastfeeding, or don’t start in the first place, because they feel so anxious about breastfeeding in public. Others wonder if their breasts are even capable of making enough milk, which may be harder to believe if they saw more women breastfeeding, more often.

By shooting this empowering front cover, Elle Australia is showing women just how public breastfeeding can get. If Nicole Trunfio can breastfeed on the front cover of a magazine, then surely breastfeeding at the cafe down the road from your house can’t be too difficult, can it? If women can breastfeed their babies whilst wearing very expensive designer clothes and having a camera aimed at them, then it’s probably ok for you to breastfeed your baby on a park bench.

The stunning cover shot is powerful because it breaks down stereotypes. Sadly, there is still a stereotype of the type of woman who breastfeeds. Some people still hold the view that ‘only hippies breastfeed’, and while that view is falling out of favour as people realise just how important breastfeeding is for babies and how many different women breastfeed across the world, this photo may go someway to convincing a few more people.

BellyBelly contributor, International Board Certified Lactation Consultant (IBCLC) and wonder woman breastfeeding expert, Renee Kam, says: “Breastfeeding covers are important to demonstrate that women are able to combine many aspects of their lives such their jobs, their sexuality and their motherhood including breastfeeding.”

Nicole Trunfio is a working mother, she is beautiful and empowered, and now she is a public advocate for breastfeeding. On her Facebook page, she posted the following status:

Nicole’s description of her world’s colliding is important, because it shows that women can breastfeed their babies and still focus on their work, their identity and the things they love. The photograph captures a moment in time where a strong, successful woman paused from her work to take care of her baby. She is glamorous and stylish, and though she is the first to admit that that’s not how she looks when she’s breastfeeding at home (breathe a sigh of relief all you die-hard pyjama fans), this photograph proves that motherhood can be stylish. ‘Mumsy’ isn’t used to mean striking, stunning or empowered, and yet this photograph proves that this is exactly what mothers are. 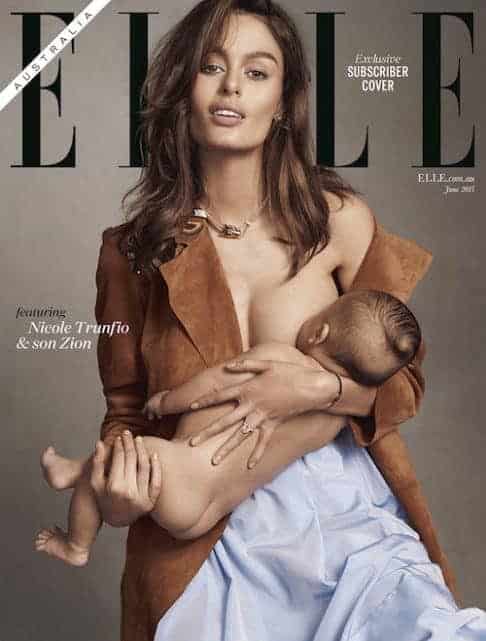 When you’re caught up in the daily grind, breastfeeding is a mixture of soggy breast pads, snotty nipples and hours spent trapped under a feeding baby. It can take up to eight hours a day and can sometimes feel more like a chore than something to be savoured, but this photo shows how beautiful breastfeeding can be.

If it encourages a few more women to snap a breastfeeding selfie, or even book a photographer to catch the moment for them, so that they have something to look back on in the future and say ‘wow, look at me, I looked so beautiful breastfeeding my child,’ then that can only be a good thing.

So, if you’re reading this as a breastfeeding mother, make sure you capture your breastfeeding journey on film before it comes to an end. The photograph will serve as a powerful reminder of your strength and determination, as well as the love you feel for your child.

When Can You Find Out The Sex Of Your Baby?