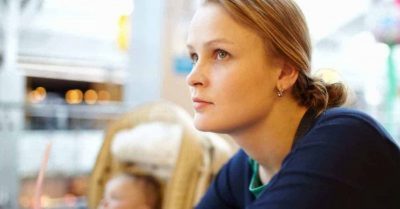 You’re at the store picking up some last minute shopping and your toddler gives you an impromptu hug.

Or you’re at the park and your preschooler presents you with a lopsided posy of wildflowers.

Maybe you’re checking your baby is comfortable in his pram and you catch his first smile.

Then a well-meaning stranger walks past and tells you to enjoy every minute, because they grow so fast.

These are undeniably precious moments. They are the things you know you will tuck away in your memory forever.

And when your kids have grown, and flown the nest, you will have those moments to cherish.

They’re also the moments which lay some balm on the memory of the last four nights of dealing with baby screaming for hours.

Or with the toddler who drew on the wall in permanent marker. They also help to soothe the pain of hearing your kids arguing over who gets to sit in that chair.

But there is nothing more overwhelming than being the mother who is just surviving, and who’s not sure whether she will actually get through the whole day without crying, and who is then told to ‘enjoy every moment’.

Because not every moment is enjoyable.

Sometimes – in fact, most of the time – being a mama is just plain hard work. Yes, it can be rewarding, too, but in the moment, in the middle of the sixth tantrum of the day and the third night in a row of little sleep, it doesn’t feel that great.

What about those too hard moments? Do we tell mothers to enjoy those too?

You know the days. The days when you feel you’re failing as a mother. The times you convince yourself you shouldn’t have had kids. Or when  you hurl toys into cupboards and screech about not being everyone’s slave.

Then there are the endless hours of being bored out of your mind. Of wanting just to step out of the door, breathe your own air, and have absolutely nothing touch for you for at least five minutes. And hear nothing but your own thoughts.

Telling mamas to enjoy those moments, as well as just get through them, is one more of those ‘shoulds’ women don’t need.

You don’t need to be told what you ‘should’ do to be a good mother.

It’s ok to say ‘This is really hard, harder than I thought it would be’. It’s normal to feel that way and it’s not ok to pretend it’s anything else. Admitting it’s hard doesn’t mean you don’t love your babies, and it doesn’t make you a bad parent.

Instead, it’s being real about the intensity of parenting. Having the strength to say there are beautiful shining moments in the darkness is you doing the best you can.

It doesn’t matter whether you’re a new mama, one who is parenting alone, a mama who is far from friends and family, one who is utterly exhausted, or a mama who just wants a break. You’re doing the best you can.

And that’s why it’s ok not to enjoy every moment.

How about we remind ourselves we’re not the sum of all of our less than enjoyable moments, and embrace them as part of the whole of parenting?

Things like the nappy blowouts in the supermarket, the whining for ice cream, and the refusal to put on shoes.

And the endless hours of sleep deprivation and the puke in the middle of your bed. Then there are the tantrums in the park as you try to leave, and the dinners thrown on the floor in refusal.

None of that makes you think, ‘I should really enjoy this’.

Most of the time, you grit your teeth and wonder how to stay sane as you go through the most intense experience of your life, which is raising children. These moments aren’t enjoyable but they are a very large part of parenting.

Anyone who tells you different is lying.

The people who tell you to enjoy every moment mean well. They’ve forgotten (or blocked out) the reality of raising children – which is it’s not all sunshine and roses. They’ve done what many of us do: avoid the memories of the tough stuff, which is part of the good stuff, and can’t be separated from it.

Let’s give mamas a break, and stop telling them to enjoy every moment. Let them embrace the messy process that is raising children with honesty. Let’s support them through the tough days so they can lean into the good stuff, and let those moments carry them through.