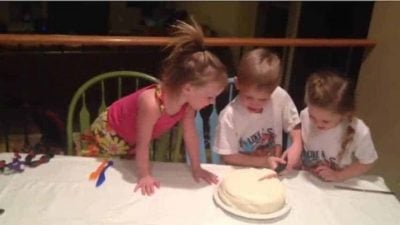 It may not be something many parents talk about, but not all parents feel thrilled when they discover the sex of their baby at the anatomy scan.

It’s not unusual for parents to have a preference and to feel a little disappointed when they discover the baby isn’t the gender they were hoping for.

Most of these adults, however, are able to keep their disappointment under wraps, perhaps opening up to just a couple of very close friends and family members.

Kids, however, aren’t quite so controlled when it comes to handling gender disappointment.

One excited couple thought it might be nice to do a gender reveal to announce the sex of the baby to their family. As the couple’s three children gathered around the dining table, their dad hit record so they’d be able to treasure the moment forever. After all, who wouldn’t want to capture their family’s excitement about the new baby, right?

To begin with, the couple’s only son, Gunner, seems excited about discovering the gender of the new baby. He thinks it’s going to be a boy. His mama presents him with a gender reveal cake. Covered in white icing on the outside, the colour of the sponge will reveal whether the family are expecting a little brother or a little sister. As Gunner pulls out a slice of cake, we see the pink sponge and Gunner immediately shouts, “It’s a girl! It’s a girl! It’s a girl! It’s a girl?”

It isn’t the joyous shout of an overexcited brother, however, instead Gunner cannot hide his disappointment at the news that he’ll be getting another sister. Within moments, Gunner is inconsolable. He won’t even eat the cake. The heartbroken youngster tells his dad, “I hate girls. Every time it’s girl, girl, girl, girl! It’s all gonna be girls.”

Through his sobs, Gunner tells his family, “I want to leave this house and never come back. I want to be myself. I don’t want another girl. That’s too much girl!” In an attempt to console Gunner, his dad shares his own disappointment about the news.

The three-minute clip is a little heartbreaking to watch as Gunner struggles with his disappointment. By the end of the clip, Gunner is still upset and his two little sisters are still waiting patiently for cake. Apparently Gunner has now come around to the idea of another little sister to play with. The clip has been watched over 5 million times.

Gender disappointment is more common than you might think. Check out our helpful article, Tips For Coping With Gender Disappointment.https://youtu.be/VrAcV2ywnqc

How Does Breastfeeding Work? An Explanation

Does Dad’s Diet Affect The Growing Baby In Utero?

Amniotic Fluid Infection | What You Need To Know And Do