Early Pregnancy Bleeding | How Much Bleeding Is Normal? 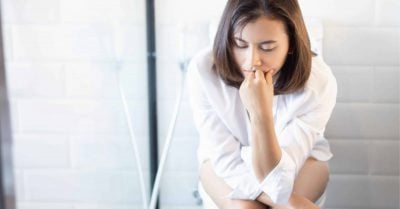 Early pregnancy bleeding is common but causes a lot of anxiety and concern for women. In the first trimester, so much is going on in your body.

While you can’t see what’s going on, in early pregnancy your body is experiencing huge hormone shifts. With all that happening, early pregnancy bleeding is quite common. Around 25% of women experience some bleeding in the first trimester.

Noticing early pregnancy bleeding doesn’t necessarily mean something is wrong. But the sight of any blood, even the smallest amount, can cause a lot of concern and anxiety for women when they’re pregnant.

While it is common and usually not a concern, it’s always best to seek the advice from your care provider if you experience any early pregnancy bleeding.

How much bleeding is normal in early pregnancy?

Early pregnancy bleeding is usually very light and is often referred to as spotting.

Spotting is very common during the first trimester and most likely happens around 6-7 weeks.

Spotting is usually noticed as a smear or drops of pink, red or brown blood and wouldn’t fill a panty liner.

Bleeding is a much heavier flow, similar to a menstrual period. You would need a sanitary pad to contain the flow. Heavier bleeding is something that should be investigated as quickly as possible.

With any spotting or bleeding, if you’re experiencing pain, fever or other symptoms, seek the advice of your doctor immediately.

Remember, early pregnancy bleeding is common – you’re not alone. A visit to your healthcare provider not only makes sure you and your baby are healthy, but it could give you precious peace of mind, rather than worrying and uncertainty.

At 4 weeks pregnant you’re waiting for your next menstrual period. Around 50% of pregnancies are unplanned so you may not be aware of the fact a fertilised egg has settled into your uterus. You may feel more tired than usual or have tender breasts, but chalk this up to being close to your period.

If you are trying to conceive, then you’re more likely to be paying attention to your body and more attuned to the early signs of pregnancy. At this stage, if you’re hoping to be pregnant, the last thing you want to see is any bleeding.

Bleeding in early pregnancy at 4 weeks is actually more common than you might realise. The fertilised egg burrows into your uterus and causes spotting or light bleeding.

Your cervix is a little more sensitive than usual and may bleed after sex. In some situations, you may have an infection that causes bleeding. It’s always important to see your doctor in case there is an underlying condition that needs to be addressed.

One of the most common reasons for early pregnancy bleeding is implantation. Implantation happens when the fertilised egg settles into the blood rich uterus lining and begins the transformation into a fetus.

Early pregnancy implantation bleeding is usually light pink to rusty brown and is spotting rather than a heavy flow.

Find out more about implantation bleeding.

During pregnancy your hormones shift, preventing you from menstruating. However, some women do experience period-like bleeding during the first months of pregnancy.

This is known as decidual bleeding and happens when the uterus sheds some of its lining each month around the time a menstrual cycle would normally happen.

This is not a true period but looks very similar to your regular menstrual bleeding and can be the reason why some women aren’t aware they’re pregnant.

Light bleeding is generally what we call spotting; that is smears of pink, red or brown blood and doesn’t fill a panty liner.

Benign causes of light bleeding in early pregnancy are usually implantation bleeding and don’t cause other symptoms, such as clots or cramping severe enough to be painful.

Any signs you are worried about with light bleeding, always seek the advice of your doctor.

While some light bleeding or spotting is common, heavy bleeding in early pregnancy may indicate a more serious problem.

Causes of heavy bleeding in early pregnancy include:

If your early pregnancy bleeding is heavy, see your healthcare provider as soon as possible.

If you are experiencing bleeding and cramping in early pregnancy, it’s hard not to worry about miscarriage.

Early pregnancy miscarriage often happens before a woman know she is pregnant. Many women have a period a little later or heavier than usual.

Most often a miscarriage happens early in pregnancy due to the fertilised egg not being viable in some way. This might be to do with a chromosome problem which means the fetus would not develop.

Cramping can be associated with implantation, when the fertilised egg settles into the uterus wall. A small amount of spotting isn’t uncommon at this time.

Heavier bleeding with cramps should be investigated by your care provider in case there is another issue, such as ectopic pregnancy. This is when the fertilised egg is still in the Fallopian tube.