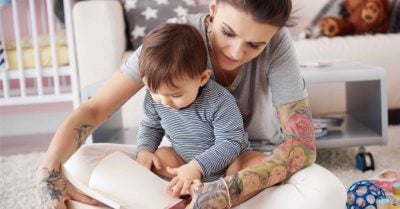 If you’re breastfeeding and considering getting a tattoo, your baby’s health is probably the first thing on your mind. You’re probably wondering, can you get a tattoo while breastfeeding?

A tattoo is a form of body modification, where a design is created on the skin by inserting ink, dyes and pigments.

Getting a tattoo is often a form of self-expression or to memorialise a special event. More recently, some women have been getting breastfeeding commemoration tattoos. Whatever the reason, getting tattoos has increased in popularity amongst women, some of whom are also becoming mothers.

Therefore, it’s not surprising to hear mothers may be thinking of getting a tattoo (or perhaps having one removed) while breastfeeding, and wonder about the safety of doing so.

Are You Getting BellyBelly’s Baby Week By Week Emails? We think they’re the best on the internet! Click to get the FREE weekly updates our fans are RAVING about.

Can you get a tattoo while breastfeeding?

There are differing opinions as to whether breastfeeding women can get tattoos. However, there’s no evidence of negative outcomes related to breastfeeding and getting a tattoo.

In addition, no government or medical organisation prohibits breastfeeding women from getting a tattoo.

How long after getting a tattoo can I breastfeed?

Tattoos are created by injecting ink into the second layer of the skin. The ink used in tattoos in the United States has not been approved by the FDA for injection under the skin.

The ink used in tattoos is made from various compounds including heavy metals.  It’s typically assumed the ink molecules are too big to pass into breastmilk, which suggests it would be safe to breastfeed from immediately after getting the tattoo.

However, it is unknown if the ink molecules might be able to pass into breastmilk as they gradually break down in the body.

Will tattoo artists allow me to get a tattoo if I’m breastfeeding?

Professional tattoo artists may be reluctant to allow a breastfeeding woman to get a tattoo as they may be concerned about the risk of infection and liability.

A reputable tattooist will request you sign a waiver if you’re breastfeeding. Some tattooists suggest waiting a certain period of time after a baby is born before getting a tattoo, such as when the baby is no longer being exclusively breastfed.

If you decide to get a tattoo when breastfeeding, it’s important to follow the same precautions as anyone else who gets a tattoo.

It’s important to screen your tattoo artist carefully. Reputable tattoo artists will follow all universal precautions when performing the tattoo.  For example, they will sterilise the tattoo machine using an autoclave, use single-use inks, ink cups, gloves and needles and undertake thorough hand washing procedures.

What are the risks associated with getting a tattoo?

There are some risks of getting a tattoo. For example it’s possible to:

The above risks can be minimised by choosing a reputable tattoo artist who follows universal precautions.

Can a tattoo be removed when breastfeeding?

Tattoo removal is done with a laser, which produces short pulses of intense light that get absorbed by the pigment in the tattoo, causing the pigment to break up into smaller particles.

The smaller particles get picked up by the body’s immune system and filtered out by the liver. The process of laser tattoo removal is lengthy, expensive and may be painful and lead to blistering and scarring. The same risks of tattooing apply to laser tattoo removal.

There have been no studies examining if the broken down particles can enter breastmilk. Some assume the particles would still be too big to enter breastmilk. To eliminate the theoretical risk, some mothers wait until their child has weaned before having any laser removal of tattoos done.

Should I get a tattoo while breastfeeding?

There is little evidence about the safety of tattoos and breastfeeding. If you already have tattoos, you can breastfeed.

However, there are differing opinions as to whether a breastfeeding mother should get a tattoo or have laser tattoo removal.

If you decide to get a tattoo or have laser tattoo removal while breastfeeding, be sure to seek out reputable tattoo artists who follow universal precautions, and chat with your doctor about the pros and cons.

Early Pregnancy Bleeding | How Much Bleeding Is Normal?