Looking for some gender reveal ideas?

Gender reveal parties have been around for a few years, and seem to have originated in the US.

Many couples see a reveal party as a great excuse for the family to get together and celebrate the pregnancy.

Some couples have them in place of a baby shower.

If you’re interested in throwing a reveal party, here’s plenty of great gender reveal ideas to help get you started.

Whatever you do – be sure to ban balloon release reveals, as wildlife can suffer painful deaths from entanglement or gut blockages after eating balloon waste products.

Want to check out a heap of gender reveal party accessories? You can find them HERE on Amazon.

So, we’ve scoured the internet and found the best gender reveal ideas we could find. Here they are! 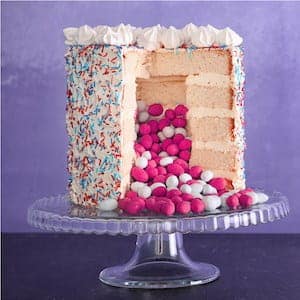 A gender reveal cake (or cupcakes) is a very popular option for reveal parties!

You can either try your hand at making your own gender reveal cake or have one made for you.

Some couples choose to have their cake decorated in neutral colours like white, yellow or green, or alternately they may have a pink and blue theme.

Some couples add a big question mark on the cake or some sort of cryptic message.

The middle can either be a coloured centre (pink or blue) or it can include sweets or chocolates in the middle.

For the box of balloons, simply find a box big enough to hold a bunch of helium filled balloons.

You can decorate the box with question marks, splashes of pink and blue, pictures of girl and boy babies – whatever you like!

Who doesn’t love a good piñata?!

Hang up a piñata filled with pink or blue lollies and sweets.

For something healthier you can use confetti, streamers, bows or anything else – even a mix of all of those things.

You’re only limited by your imagination. You could even fill it with pink or blue dummies (pacifiers)!

Get some ideas for your reveal piñata here. 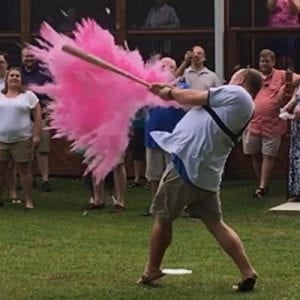 Pink or blue powder-filled baseballs are a great way to make a noticeable announcement!

Partners will have fun taking a swing – and hopefully hitting the ball!

If you already have kids, you could put the baseball on a tee and they can hit it too.

Make sure you have a photographer on hand to create a memory you won’t forget.

You can buy the original gender reveal baseballs from Amazon (as used by professional baseball players).

Footballs are also available, as well as golf balls. 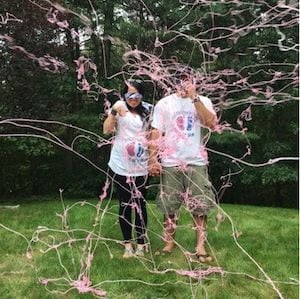 An announcement with silly string is so much fun!

There are a couple of ways you can do this.

Depending on the cans, you’ll need to either remove the lids, or cover up the outside of the cans, so no-one picks the colour of the spray.

To announce your baby’s sex, you can:

You can order a bunch of pink or blue silly spray here.

Similarly to the silly string idea above, some expectant couples cover up a tin of non-toxic paint, and at reveal time, face each other and throw a can of pink or blue paint at each other!

Be sure someone is taking photos and you use non-toxic paint!

A no-fuss, no mess way of doing your reveal that can involve your other child(ren).

This reveal involves having an older child wearing a cute tee with a message on it about getting a baby sister or brother.

They can get changed right before announcement time! Or you could sneak the tee on at a random time, then let the child roam around until someone notices.

If you have several children already, you could get tees for all of them to avoid fights.

The less party meltdowns the better!

You can have a fun gender guess/voting competition at your gender reveal party, which can be the main event for the reveal or as an additional fun game for guests.

You can let your imagination run wild with this one.

But to get you started, you might like to put a small chalkboard on an easel or table. Or, perhaps a beautifully decorated poster, with a list of guests names and some writing materials, so they can cast their vote.

At the end of the event you can do the reveal and see how many guests got it right!

To help your guests, you might like to set up a display of ultrasound photos, belly shots at different weeks or a chart of Chinese gender predictions, circling all the symptoms that you’ve experienced.

If you’d like something a little low key, yourself and your partner can have a photo shoot reveal, which needs to be well planned before the party!

Take your partner along to a photographers studio (or even in your own home if you prefer) and dress up in the colour of the baby’s gender.

You can be as silly or serious as you like.

On the day of the reveal, you can present it any number of ways.

If you have the photo printed on canvas or in a frame, simply cover it up so no-one can peek until you’re ready to announce!

The best bit about this one is that you get to keep the reveal item as a memory.

For all the pet lovers out there!

Would you like to get your pet involved in the act?

If you have a cat or dog for example, you can organise for them to come out to the guests at announcement time – wearing something around their neck to announce the gender.

It might be a pink or blue ribbon or bow, a dummy tied to a ribbon or anything else you can think of.

This idea is similar to the vote idea.

Team pink or team blue? Your guests can wear an item at the party to identify what team they are on.

Some choose to do bows or bow ties, or perhaps mo’s and bows.

You could ask them to come along wearing something pink or blue, or a bow or bow tie somewhere on their body!

Some couples have a baby name suggestion box on a table they’ve set up for their gender reveal party.

You might get some awful names, some funny names or serious ones.

But you never know, if you’re stuck on a name, you just might have a winner after your reveal party!

Another fun idea for gender reveals is a blackboard or poster of baby names.

There should be two columns, one side listing boys names and one side with girls.

The guests can either guess the name you’ve picked for a boy and a girl, or they can pick their favourite name in your list! 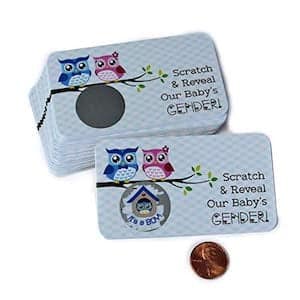 Here’s a cute little card to help with your announcement!

These cute blue cards have a scratch and reveal panel.

Once guests scratch off the panel, they’ll discover what sex your baby is.

You can hand these out at parties, or you can post them in the mail!

Things To Consider Before Your Reveal Party

Before you have a reveal party, some things to consider:

Did You Have A Gender Reveal Party?

Share your photos with us for possible inclusion on this page! Send your photos or stories to contact@bellybelly.com.au.
“We had a gender reveal party with our second son. After struggling to allow myself to feel excited about the pregnancy after and previous loss, it was not only a way to find out the sex but a celebration of his little life and making it halfway through the pregnancy. We had a cake with just our family and a few friends who are like family. It was so special. One of the happiest days of my life! Our guests were all beyond thrilled, especially our son who found out he was having a baby brother! ” – Tabitha

Do Babies Get Bored?

Do Babies Get Bored?