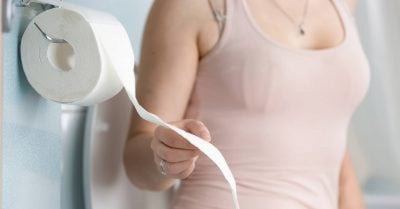 No matter if it’s thick clear jelly like discharge or slippery and sticky discharge, it’s common to experience vaginal discharge during your menstrual cycle and during your reproductive life.

Vaginal discharge is fluid produced by glands in your cervix and vaginal wall. This fluid protects your tissues from injury and keeps the area clean and moist.

What many women wonder though, is, what is this clear jelly-like blob discharge and what does it mean?

Where you’re at in your menstrual cycle, and varying hormone levels, means the amount of vaginal discharge can vary. This article is all about the clear jelly-like blob discharge you get at times when you’re not pregnant… and when you are.

Depending on your cycle and hormones, most women will experience increased clear jelly like discharge around ovulation time.

Ovulation is usually around the middle of your menstrual cycle. Your body releases an egg, and in preparation for potentially being fertilised, cervical mucus increases.

When ovulating, discharge usually looks clear, stringy and jelly like, similar to egg white. You might notice it in your underwear, or on toilet paper when you wipe. It helps sperm to travel up through your cervix, and fertilise the released egg.

Observing fertile mucus has been found in studies to be quite an accurate indicator of ovulation. You can find out more about fertile cervical mucus if you’re trying to get pregnant.

After ovulation your vaginal discharge will become dry and thin. This is due to estrogen levels decreasing.

However after ovulation you may notice jelly like discharge if conception has occurred. This is due to estrogen and progesterone rising. Your discharge will usually stay thick and jelly like. It might be clear or slightly white in colour.

Why do I have jelly like discharge during pregnancy?

When you’re pregnant, your hormones soar and your body ramps up blood flow to your pelvic area. These changes stimulate your body’s mucus membranes and you see an increase in vaginal discharge when pregnant.

This has an important role in preventing infection as the jelly like discharge will eventually form your mucus plug. This forms in the cervix, to protect your developing baby from harmful bacteria. It also helps to keep a healthy balance of bacteria in the vagina.

For more helpful information about discharge during pregnancy, be sure to check out Discharge During Pregnancy – What You Need To Know.

How does discharge look in early pregnancy?

Vaginal discharge in early pregnancy usually looks white or pale yellow, and is usually thin or sometimes sticky. It has no odour or a mild odour.

Seek advice from your healthcare provider or ob gyn if your discharge:

These signs indicate a problem. See your healthcare provider about any cervical mucus changes, to rule out a sexually transmitted infection or other infections.

If the discharge is thick, white and has the consistency of cottage cheese, you could have a yeast infection (vaginal thrush). Eliminating sugar and grains from your diet can help prevent thrush. Be sure to wear breathable cotton underwear, avoid bubble baths or soaps which are not pH neutral, and see a naturopath or nutritionist who can help rebalance the good bacteria in your gut.

Your mucus plug started forming all those months ago when you first become pregnant. It’s protected your baby from infection and is constantly renewed, so you are likely to have noticed an increase in vaginal discharge during pregnancy.

As you get closer to full term, your body starts to prepare for labour and birth. Part of this preparation is your cervix ripening and softening. Over time, your mucus plug will begin to come away.

Some women don’t notice their mucus plug coming away and others might only be aware of it when they wipe after using the toilet and see a jelly like discharge.

Sexual arousal will increase the amount of blood flow to your pelvic area and glands will begin to produce more fluid. This helps to lubricate the vagina during sex.

This increased production of fluid means after sex you may notice an increase in discharge after sex.

If you’re pregnant, you’re even more likely to see more jelly like discharge after having sex. This is true in the early weeks as the mucus plug is still forming.

Jelly like discharge or clots on heavy days of your period are a mix of blood and tissue shed from your uterus lining.

When your period is very heavy, the anticoagulants that break down clots can’t keep up. The clots can vary in size and colour and for the most part aren’t anything to worry about.

However, larger clots can indicate a hormonal imbalance. It’s worth seeing your care provider if this happens several months in a row.

After a miscarriage, it can take some time for your hormones to go back to normal cycle levels. It’s not uncommon for women to have clear jelly like discharge in the weeks after a miscarriage. This is often a sign you will ovulate soon.

Other women do experience more bleeding and clots during their next period after a miscarriage. This can be due to the uterine lining being shed still

Always seek advice from your care provider if you’ve had a miscarriage and are concerned about anything.

Coronavirus (Covid-19) And Pregnancy – All Your Questions Answered