When To Take A Pregnancy Test – For The Best Result

when to take a pregnancy test 1

Want to know when to take a pregnancy test, so you can get the best, most accurate result?

At the beginning of pregnancy, the fertilized egg implants into your uterus. It then produces a hormone called human chorionic gondotrophin (hCG for short!).

Human chorionic gonadotropin can be detected in your urine if you’re pregnant.

From early pregnancy, the levels of hCG increase as your pregnancy progresses, peaking at around 8-11 weeks, before dropping to a lower level at 12 and 16 weeks.

Some pregnancy test kits can detect hCG levels as low as 10 or 25mIU/ml.

If you’re pregnant, at 10 days past ovulation (DPO) you may be able to detect around 25mIU.

When to take pregnancy tests

Pregnancy tests are designed to detect levels of hCG produced by your body if you are pregnant.

Your body may be producing human chorionic gonadotropin before a missed period, however it’s ideal to take a home pregnancy test on the first day of your missed period.

If you take a home pregnancy test before a missed period, you may indeed receive a positive result. But if you take a test before your period is due, you’re more likely to end up with an inaccurate result.

Pregnancy tests may produce a negative result if your hCG levels are not yet high enough to detect a pregnancy.

On the other hand, it may show a positive result and not develop into a true pregnancy, due to the incidence of spontaneous miscarriage. These can occur before a missed period, and normally you would be none the wiser.

Are You Getting BellyBelly’s Pregnancy Week By Week Updates?
If you get a positive pregnancy test, enter your estimated due date for weekly development emails!
Get the FREE weekly updates our fans are RAVING about.

When is the best time to take a pregnancy test?

So you’ve had a missed period, and it’s time to take the test… but when?

The pregnancy hormone hCG is usually at its highest levels early in the morning, when your urine is concentrated after a sleep. Especially if you’re early in your pregnancy, this is when it’s the best time to take a pregnancy test.

Excessive fluid intake before taking the pregnancy test can actually dilute hCG. This can make the result hard to read.

How to take a pregnancy test

It’s always best to follow the manufacturer’s instructions included with home pregnancy tests, as the procedure can vary and affect your result if not done properly.

As soon as you have taken the pregnancy test out of the packet, avoid touching the absorbent pad.

There are normally two ways you can perform home pregnancy tests, midstream or in a cup.

If you prefer to use midstream pregnancy tests, all you need to do is hold the test almost vertically and pass it through a weak stream of urine. Make sure you avoid water or urine being splashed on the device before starting the test.

If you prefer to use the cup method, urinate into a clean, dry container and dip the absorbent pad into the urine for 3-5 seconds. You do not completely immerse the absorbent pad, 1cm is sufficient.

Many home pregnancy tests claim to be over 99% accurate – when taken correctly. This usually means when the test is taken on the first day of the missed period.

However a study found that some pregnancy tests have poorer detection limits for H-hCG (which is what’s found in early pregnancy urine) than others.

It’s more likely you will get a false negative than a false positive, due to a faulty test or having hormone levels too low to be detected.

If you’re confused about your results, your health care provider can always organise a blood test to check for hCG levels in your blood.

Can medication affect the results of a pregnancy test?

If you’re taking antibiotics, the contraceptive pill, or painkillers, this should not affect the result of the pregnancy test.

If you’re on any fertility medication which contain hCG, you may receive a false positive.

Speak to your pharmacist or health care provider for more info.

Clomid does not produce false positives for pregnancy tests, but it can with ovulation tests.

A positive test result will show a control line that was present before you took the test (usually quite dark) and a second line will appear after the urine passes through the window.

Some pregnancy tests have two individual windows, where lines need to show in each window.

Other pregnancy tests are designed to have a cross to show a positive result, so they can vary – just read the instructions to find out what to look for.

The positive result line does not have to be as dark as the control line. But if you have a second line appear during the time frame specified on the packet, then you are pregnant. 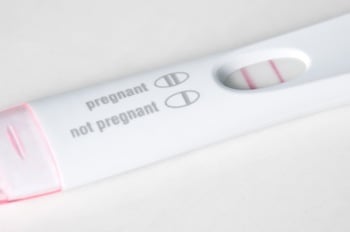 A negative pregnancy test will only display the original control line; nothing else will show up at all after the urine has passed through the window.

Sometimes you can take a pregnancy test, only to have a very faint line come up after the designated time frame specified on the packet.

It will tell you to wait a certain amount of minutes to show a result.

After this time, the test should be discarded. 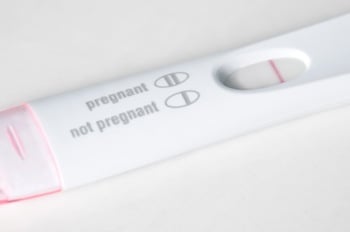 What if the pregnancy test lines are faint or hard to read?

It’s completely normal for the result on the pregnancy test to be either fainter or darker than the control line.

One reason for a faint line could be due to less hCG in your urine, especially very early in your pregnancy.

It may be darker if your pregnancy is more progressed, but not always.

Occasionally the pregnancy test may display a ‘shadow’ line when the positive result should be.

Find out more in our article, Faint Line On A Pregnancy Test – What Does It Mean?

How long should the test take to work?

The pregnancy test result should be read from 5 minutes and no later than 10 minutes.

If any lines do appear after 10 minutes, it is still a negative result and must be disregarded.

If you read the pregnancy test sooner than 5 minutes, it may also be inaccurate, as it has not had enough time to work.

What if there are no lines on the pregnancy test?

It’s unlikely this will happen, but if it does, disregard the test.

The test may be faulty, or the result of not enough urine on the absorbent pad.

Other causes are too much urine on the absorbent pad, or perhaps the test was not held correctly in the stream of urine.

Repeat the pregnancy test, carefully following the instructions as in the above question on how to use the test.

Should I repeat a pregnancy test? If so, when?

If the result of your test was negative and your period still hasn’t started after a few days, test again.

You may have miscalculated your cycle dates and / or the hCG level may be too low to detect.

If you still receive a negative result after the second test and still have no period, consult your doctor.

Some women find if they don’t get a positive result as soon as others. But they’ve been able to detect pregnancy with a blood test.

Everyone is different; however if you are concerned, see your healthcare provider.

What should I do if I am pregnant?

You can work out when your baby might be due by using BellyBelly’s Due Date Calculator.

Once you have an estimated due date, start considering your options for pre-natal care.

Try investigating all your options in order to make an informed decision.

You could choose from an independent/homebirth midwife (who will support you at home or hospital), an obstetrician, or a GP for shared care (in Australia).

Having trouble getting pregnant?

It’s normal to conceive anytime in the first twelve months of trying.

You can try charting your cycle or using ovulation prediction kits (OPK’s), which work in the same way as pregnancy test kits – by measuring hormone in your urine.

They can help you to identify your most fertile period by detecting luteinising hormone (LH). LH signals that ovulation is likely in the next 24-36 hours.

Click to see a popular and high rated brand of ovulation prediction tests.

Hospital Bag For Labor – What To Pack?

That’s Not Fair… Balancing Chores With A Baby

That's Not Fair... Balancing Chores With A Baby