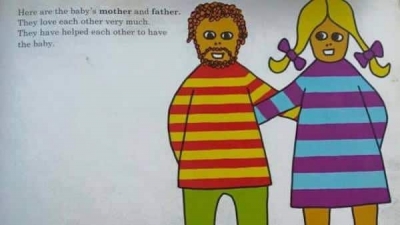 how a baby is made

Although it’s a very important issue, many parents feel anxious when it comes to their kids’ sexual education.

Human reproduction hasn’t changed throughout the years. Society, however, keeps on changing and the way we talk to our kids about sex varies greatly – not only from one generation to another but also from one family to the next in the same city.

Sexuality is a very important part of our lives and we should focus on doing a good job of giving our kids information about it.

Some parents feel embarrassed talking about sex, and others just don’t know how to start a conversation about sex education.

When teaching sex education you might be tempted to go with the ‘birds and the bees’ approach, but it’s usually better to be straightforward about it and forget any analogies.

Explaining things simply, and using the right terminology, is the most appropriate way to talk to children about sex.

Parents are now advised to teach their children the correct words for the human anatomy, even from a young age.

We know that young people who are well informed about sex will make better choices about consent, safe sex, prevention of sexually transmitted diseases, and contraception.

Today’s sexuality education is more about prevention education than about morals and marital status.

Discussions about sex should be honest, open, and age-appropriate. Sex education shouldn’t be just a conversation, it should be an ongoing dialogue.

You should always try to honestly answer any questions your child has about anything to do with sex and relationships.

In the 1970s, sex education wasn’t an easy task. Sex education programs weren’t a part of the public education curriculum in the vast majority of places. This left parents to teach their kids about sex in the best way they could.

How successful this was really depended on the sex education and knowledge the parents had themselves and the way the topic was dealt with in their own family life.

Many parents of the seventies had received a fairly standardized form of sex education, which focused on reproduction, and the prevention of sexually transmitted diseases. It also leaned heavily towards the importance of marriage and family. Even though there was a sexual revolution happening during the sixties and seventies, for the most part, adults had a fairly conservative attitude to sex.

How Babies Are Made 70s book

For many parents in the 70s, there was a lack of reliable information; they mainly relied on books to educate their kids about sex and family life.

One of these books, How A Baby Is Made, was published in 1975. It was designed to educate young children about where babies come from, allowing parents to sidestep any potentially awkward questions.

Parents thought their difficulties in providing sexual education to their kids could be solved by purchasing books written by so-called experts, or at least by professionals who knew more than they did about sex, and about how to teach young children.

How A Baby Is Made may well have been the ‘thing’ at the time, but it’s recently done the rounds on social media, after illustrations from the book were shared online, with the hashtag # traumatized. It’s not hard to see why.

Things start off well. There’s a brief description of love, and an illustration of a happy, fully clothed couple with their arms around each other. The illustrations are typical of the 70s, too – lots of long hair, big beads, and colorful striped clothing.

On the next page, however, things take a turn. Suddenly, the couple is naked, and stays that way for most of the book. Readers then see the couple in what can only be described as a very scary sex session, accompanied by with diagrams of internal organs.

One particularly unrealistic page features an illustration of a baby being born. The mother is lying on a bed with her legs open and, from between her legs, a wide-eyed baby emerges, with a smile on his face.

You can pick up a copy of How A Baby Is Made for a bargain price of $100 here. If you’d prefer a more affordable and much more modern approach to sex education, BellyBelly recommends It’s Not The Stork, aimed at children aged 4-8.

The children whose parents chose this book for their sexual education were much luckier than the previous group.

The author, Peter Mayle, did a very good job of teaching kids about sex. This book’s explanation about sexual intercourse is one of the best age-appropriate explanations given to date.

We have to remember, of course, it was written almost 50 years ago; the illustrations and some explanations were more appropriate for that time.

It was written with education for children clearly in mind and it’s still used in some sex education programs for younger children. Since then, many more modern books on sexual education have become available.

Sex education classes in the 70s

Even though most schools didn’t have a defined sex education curriculum, it didn’t mean sexual education was never taught in schools at all. Some schools chose to be more forward-thinking, and offered sex education programs as was thought appropriate at the time.

Some schools would provide sex education classes only for the older students. Other schools provided extra classes, or courses, to educate parents so they’d be well informed and able to use the knowledge in their family life.

There were also other private and federally-funded initiatives carried out by community institutions, such as family planning centers, churches, and youth agencies. These programs targeted mainly parents and teachers.

Although some kids of open-minded parents would also attend these classes, the vast majority of people attending these programs would be adults.

The idea was that the adults would become sex educators for young people and develop further sex education programs, shedding light on a variety of topics, including human anatomy and reproduction; sexually transmitted diseases and their prevention; personal hygiene; birth control; marriage; pregnancy; families; gender roles; and abstinence education.

Check out BellyBelly’s article 9 Types Of Sex You’ll Have While Trying To Conceive.

The Early Days Of Breastfeeding | What’s Normal And What’s Not?

Irene is a midwife, writer and educator specialised in women's sexual health. She's worked in most areas of midwifery and as an educator in the UK, Spain, Bangladesh, Iran and Nepal (for now!). Her professional passion is to help people understand the importance of being born, where the mother owns this process and how care providers ought to provide the right care.

The Early Days Of Breastfeeding | What’s Normal And What’s Not?