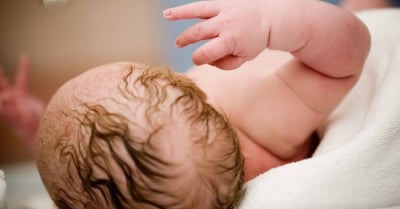 The umbilical cord often gets a few minutes of notice after birth and then is forgotten like yesterday’s news.

Most people know what the umbilical cord is – a slippery looking cord that connects a baby to the placenta during pregnancy.

This enables the placenta to pass nutrients and waste between mother and baby.

Some people know the umbilical cord has three vessels, and leaving it intact after the birth until it has stopped pulsating is a good idea.

Beyond that, though, many people aren’t aware just how amazing the umbilical cord is. There are plenty of interesting things that you probably aren’t aware of!

When your baby is small enough to move around freely, they often play loop the loop with the cord. Around 35% of babies are born with their cords wrapped around their neck, and approximately 1% of cords have true knots in them.

As long as the cord is healthy and intact, tangles and loops usually don’t affect the functioning of the umbilical cord. It’s filled with a clear mucous substance called Wharton’s Jelly, which protect the blood vessels inside from being constricted by loops or knots.

#2: The Cord Stops Working When Needed

When your baby is born, she comes from an environment that is perfectly temperature controlled. When the umbilical cord leaves your body and is exposed to cooler air, the Wharton’s Jelly begins to shrink and harden. The blood vessels inside the cord are squeezed and closed off, naturally clamping the cord.

The warmer the environment outside the body, such as during a water birth, the longer the cord takes to naturally clamp. But it usually takes between three to twenty minutes.

#3: Umbilical Cord Tissue Has A Lot Of Potential

Clinical trials underway at the moment are looking at how cord stem cells can be used to treat conditions such as stroke, rheumatoid arthritis, Parkinson’s disease, multiple sclerosis, asthma and cerebral palsy.

The umbilical cord is physiologically and genetically part of your baby. When an egg is fertilised, it divides into two parts. One part becomes the embryo and the other becomes the placenta.

The embryonic cells under go many transitions, but one of the first things to happen is the yolk sac is formed. The yolk sac provides nutrients from the mother to the embryo, before the placenta is ready to function some weeks later. The umbilical cord develops out of the yolk sac and allantois (fetal membrane).

#5: Blood Is Thicker Than Water

In the last trimester, your baby receives half a litre of blood every single minute via the umbilical cord. Your blood does not mix with your baby’s blood. The exchange of nutrients, oxygen and waste happens in the placenta.

The umbilical cord normally has two arteries, which carry blood that contains waste from the baby to the placenta. It also has one vein that carries oxygen and nutrients back to the baby.

CNN ‘Hero of the Year’ Robin Lim, midwife and creator of the Bumi Sehat Birth Clinic in Bali, has reported seeing an increase in umbilical cord deformities. Robin believes the changes to the cords may have been caused by GMOs, as a large portion of the diet in Indonesia is GMO soy based.

A recent study reported that toxins used to kill pests in GMO foods were found in the blood of 93% of pregnant women and 80% of umbilical cords.

If you need help to quit smoking while pregnant, see BellyBelly’s article on smoking myths and how to quit.

Identical (monozygotic) twins form when a single fertilised egg splits in two, and develops into two babies with the same genetic material. Around one third of all twins are monozygotic.

When the egg splits, it determines if the twins will share a placenta or not. Twinning in the first four days results in separate placentas. Twinning after four days will result in a shared placenta, but each twin has their own umbilical cord.

Umbilical cords vary in length, but are typically between 45 – 60 centimetres long. We don’t know what causes umbilical cord length, but it reaches its full length at around 28 weeks gestation.

Short cords occur in around 6% of pregnancies, and is usually linked with increased risk of placenta retention and c-section.

Your baby’s sense of touch begins to develop early during pregnancy. When you’re 8 weeks pregnant, your baby can feel touch on her face and lips. By 14 weeks, your baby is beginning to explore around the uterus and her own body, using her hands, feet, and mouth.

Ultrasound imaging shows babies using their hands to explore the uterus, including grasping the umbilical cord. This exploration of their environment primes their brain to seek learning experiences through touch after birth and into childhood.

#10: The Cultural Significance Of The Cord

In Western cultures, the significance of the umbilical cord relates mainly to the father or partner cutting the cord after the baby is born, symbolising the ‘breaking of the bond’ between mother and baby.

In many other cultures, preservation of the cord celebrates the role of the cord in nourishing the baby during pregnancy. Japanese mothers keep their children’s dried umbilical cords in a special wooden box.

Many of the Native American tribes cherish the umbilical cord. In some tribes babies would be presented with a part of their dried cord in a beaded pouch that they wore throughout life.

In Turkey, parents bury the umbilical cord of their child in a place of knowledge, to influence their future career.

With the increased interest in placenta encapsulation, new mothers in Western cultures are beginning to want their baby’s cord as a keepsake. Most placenta encapsulators also dry the cord when dehydrating the placenta and return it in a special box.