6 Reasons Why Women Can Be In Labour For Days 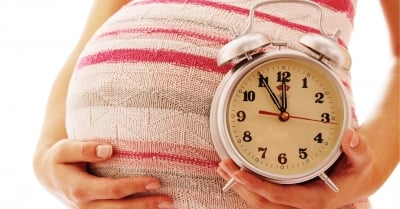 A long labour is one of the most common concerns first time pregnant women have.

Labour takes a lot of energy and mental stamina.

No one can predict how long labour will last for each woman, so the uncertainty can be a source of worry.

If you’ve ever heard a friend mention her two or three day long labour, you might be concerned about it happening to you.

After all, contractions for more than one day sounds a bit intimidating.

Fortunately, whether labour is longer or shorter, nature has designed contractions to come in waves with a break between them, and our bodies provide us with pain coping hormones.

Remember, when calculating labour duration, it’s not from the first niggle or contraction. Labour duration is counted from active labour (4-7 centimetres dilation) which is when your contractions should be well established in a regular pattern. Contractions should be getting longer, stronger and closer together. Many women say they were in labour for days, however they were most likely in early labour or pre-labour.

The medical approach to birth is to define normal labour according to something called Friedman’s Curve. This graph is used by obstetric care providers to determine if a labour fits the ‘rules’ of dilation and pushing. If a baby is not born after 20 hours of contractions, the labour is considered to be prolonged and therefore abnormal.

Not all care providers follow this curve. If you have one that doesn’t, they’re likely aware of these factors which can contribute to a longer than average labour.

There are a number of factors which can contribute to a longer labour. Here are 6 of them:

The first stage of labour is when the cervix begins to thin (efface) and dilate. Contractions of the uterine muscles pull the cervix open, and it becomes one with the uterus. In most labours, contractions start mild and intensify over time. The interval between contractions shortens, and the length and strength of the contraction increases.

Every pregnancy and labour is different. Some women will dilate a few centimeters before labour begins, while others will have a high, closed cervix until well into labour. There is no predicting what the cervix will do and when. Some women dilate at a predictable rate (1 centimetre per hour), while other women dilate slowly for hours.

If a woman has had cervix surgery resulting in scar tissue forming, dilation can be affected. The scarring causes stiffness and can make dilation very difficult. Your care provider should be aware of this during labour. Exhaustion and dehydration can also contribute to a slow labour. Rest and plenty of fluids (water mixed with electrolytes are great for hydration) can remedy this.

There are a number of ways you can promote labour contractions to make them more effective. Nipple stimulation, relaxation, active positions, food and fluids can all help improve contraction strength and duration, if there is an underlying reason why dilation is slow.

A medical approach would be to augment labour to make contractions conform to the ‘normal’ expectation. Augmentation involves methods to stimulate contractions, such as artificially breaking your waters, or an IV of synthetic oxytocin.

Nature has designed labour to be a fairly quick, easy experience for mammals. In the wild, animals tend to seek secluded and safe places to give birth. This promotes the release of oxytocin, which contracts the uterus to open the cervix and push the baby out. Oxytocin is released in greater amounts when the thinking part of your brain (neocortex) does not recognise anything in the environment that may be a threat.

About 96% of women give birth in environments that are noisy, bright and busy. This lack of privacy and quiet causes the neocortex to be engaged, sending messages to the mammalian part of the brain that there is a potential threat. Even before labour, if a woman has anxiety about the pain of labour, fear due to past sexual abuse, or perhaps has the need to feel completely in control – these factors can affect how her body works during labour.

Adrenaline is released in preparation for fighting or fleeing the threat. Adrenaline slows down contractions and muscles become tense, increasing pain levels. The mother is unable to relax and becomes tense, feeling more frightened and anxious. Care providers may discuss the lack of effective contractions and the woman’s adrenaline levels increase, further slowing the progress of labour.

Women who birth in environments where they feel safe and supported are more likely to experience labour that is not prolonged. They have access to privacy and oxytocin promoting elements such as darkness, warm water and unobtrusive care providers. The midwifery model of care, found in some birth centres and at home birth, does not agree with the medical definition of prolonged labour. Instead, midwives tend to see labour as unique to each woman and believe she is the determinant of when labour is too long.

The position baby is in during labour can have a big impact on how things progress. When baby isn’t in the optimal fetal position, with his back to the left of your belly button, head down and tucked in chin, labour can be slower than usual.

Positions that can slow things down include:

#4: The Shape Of Mother’s Pelvis

The baby’s journey from the uterus through the birth canal can be affected by size and shape of the mother’s pelvis. There are four general shapes:

The muscles supporting the pelvis and uterus also have an impact on how labour progresses. During pregnancy, body therapy such as yoga, physiotherapy or osteopathy can help women work through any muscle tension which allows the pelvis to open and prepare for an easier labour.

A study has shown that labour progresses at a slower rate for twin pregnancies than for women carrying only one baby. This has important implications for women who wish to vaginally birth twins. Most care providers apply the same timeframe to twins as a single baby, and will assume labour has stalled or ‘failed’, when in fact it’s normal for the first stage of labour to progress more slowly.

The exact reason why labour progresses at a slower rate with twins is unknown, but one theory is because the uterus is stretched more and contractions are less effective in dilating the cervix.

#6: The Use Of Interventions

A slow labour can be exhausting and demanding, and may take a lot of mental and physical strength. There is an increased likelihood your care provider will suggest artificial means to strengthen contractions.

These interventions come with increased risks to the baby, and you will most likely have to be closely monitored, meaning you will be unable to move and labour freely, which may continue to prolong the labour. The cascade of interventions (monitoring, augmentation, epidural) also has a higher risk of ending in a c-section.

In most cases, a slower than usual labour is not a concern. If baby and mother are well and healthy, and there are no signs of fetal distress, it could be that labour needs to take the extra time for that particular situation.

When labour begins, it’s wise to conserve energy, in case the first stage is prolonged. Attempting to hurry things along by climbing stairs and walking miles around the block tends to tire you and your muscles out. Focus on getting enough rest, eating nutritious food and drinking plenty of fluid. You might like to have a warm bath, get a massage or snuggle up to your partner. Things that enhance your feeling of safety and privacy will encourage the release of oxytocin, and keep labour progressing.

There are so many factors that can cause a prolonged labour. It’s important to remember that some factors can be changed, some can correct themselves and other factors are there to stay. Choose your birth team carefully, so that you can rely on their expertise and support if your labour takes longer than anticipated.

Research has shown women who give birth with the support of a doula have shorter labours, and have fewer interventions, including c-sections, vacuum, forceps, epidurals and induction of labour.