Dilation Of The Cervix – What You Need To Know

You know that your cervix needs to dilate in order for your baby to be born.

But how much do you actually know about dilation of the cervix?

Cervical dilation has become one of the most focused on areas of labour and birth, so it’s important you are aware of exactly what it’s all about.

The cervix is the opening to the womb. It’s located between the vagina and the uterus and plays a crucial role in pregnancy and labour.

During pregnancy, it remains closed and the opening is blocked with a mucus plug.

What is dilation of the cervix all about?

Normally, your cervix remains closed and hard. This protects your uterus from the outside environment and any potential bacteria.

During pregnancy, the cervix begins to slowly ripen, due to increased blood flow and hormones. These changes help the cervix to respond to contractions during labour.

So that your baby can be born, your cervix must thin and open, which is referred to as effacement and dilation. Contractions which are mild and irregular may contribute to this cervical dilation. It’s not uncommon for women who check their cervix to discover it has begun opening. 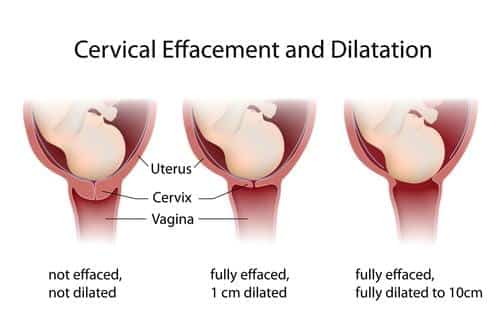 What’s all this about centimetres?

Just to be clear, no one is actually going to measure your cervix. Your care provider will place two fingers inside your vagina (called a vaginal examination) and work out how many finger widths fit into the opening of the cervix.

If you get a ruler or tape measure, you can stretch your middle and index finger to get an idea of the way your care provider estimates dilation.

Many care providers prefer to do vaginal examinations so they can chart progress against the traditional standard of dilation of the cervix. This means one centimetre per hour, with active labour beginning at four centimetres. This standard is based on Friedman’s curve, a graph developed in the 1950s and still influences routine labour management today.

Does dilation mean I’m in labour?

Dilation on its own isn’t an indicator that you are actually in labour. Many women can be told their cervix is dilated 2-3 centimetres, yet have no other signs of labour.

Dilation also doesn’t indicate when you will go into labour.

Your care provider might offer to perform a vaginal examination at an antenatal appointment and say your cervix is 3cms dilated. This doesn’t necessarily mean you will go into labour in the next day or even week. And don’t be disappointed if your cervix is closed and firm – you may go into labour later that day. Every labour is unique and what happens for one woman won’t necessarily happen to the next.

Is a vaginal exam necessary?

Vaginal examinations are optional procedures yet many women worry they won’t know how dilated they are during labour if their care provider doesn’t perform one. How will they know they are in active labour, or close to pushing?

If your care provider is observing you, they can note a number of different signs to indicate where you are in labour and guess at your dilation.

As the cervix gets closer to full dilation, contractions get longer, stronger and closer together. The woman will begin to go inward or possibly become irritable and restless. These contractions require focus and her breathing usually becomes deep and strong to get through each one.

After each contraction, she may go into a meditative state until the next one begins. It is common for a gush of fluid, mucus and bloody show to occur at this stage, as the cervix is probably dilated 6-7 centimetres.

Pressure may start to increase in the pelvis as the baby begins to descend. Often women begin to make different sounds, such as moans, grunts or low vocal tones. When the cervix is almost completely dilated, contractions are frequent and lasting around 90 seconds.

There are other physical signs indicating when you are close to or at full dilation.

Your care provider can check your fundal height. At full-term pregnancy, there are normally five finger widths between the top of the uterus (fundus) and the bottom of your sternum. When in labour, the uterus is being pulled up or bunching at the top. As dilation progresses, the space between the fundus and sternum gets smaller, until at full dilation there is usually no gap between them.

Many birth workers recognise an earthy or musky smell that women have when they are entering transition (the stage before pushing when the cervix is dilated). There is also the telltale purple line, which extends along the cleft between your buttocks. As the baby descends, increased pressure on blood vessels causes the normally pink line in the cleft to turn purple. The line starts at the anus and moves up. When it has reached the top of the cleft, the cervix is fully dilated.

Here are 7 key points you need to know about vaginal examinations.

How fast will I dilate?

Even though care providers are still using the Friedman’s curve (1cm/hour) to decide how labour is progressing, in reality, every woman dilates according to her own body’s rule. Most hospitals require a vaginal examination to check women are in active labour (4cms or more) before being admitted. Yet a study of over 1300 women showed progress can be slow until around 6cm, and the slowest rate of cervical dilation was under 1cm per hour.

A study in 2012 analyzed over 50 000 normal labours and found dilation appears to accelerate after 6-7 centimetres. The researchers found the rate of cervical dilation from 4 to 6 centimetres was much slower than current standards allowed for. This indicates care providers need to allow for more time during the earlier stages of labour, to allow for the variations in dilation among women.

Effective cervical dilation is dependent on the hormone oxytocin, which stimulates efficient uterine contractions. The uterus draws upwards, which in turn causes the cervix to thin and dilate. It is during this stage of labour women most need to be undisturbed, to promote oxytocin levels to increase as labour progresses. If a woman is exposed to bright lights, noise cold, or has no privacy, her body may start to produce adrenaline.

Adrenaline is released by the body in the ‘fight or flight’ response to a perceived danger or threat. During labour, mammals need to be able to move to safety if threatened. Humans are no different, even though we rarely give birth in the wild, the part of our brain that regulates hormone production and threat analysis is unable to distinguish between a real and imagined danger.

As your body makes more adrenaline, you make less oxytocin and contractions begin to slow down, become irregular, or even stop. World-renowned midwife, Ina May Gaskin, often discussed reversal of cervical dilation occurring when women go to the hospital after labouring well at home for hours. They may encounter staff they don’t like or be under pressure to have procedures or interventions they don’t want.

Contractions often slow or stall because of rising adrenaline levels, and a vaginal examination shows ‘only’ two centimetres – the woman is sent home or may have her labour augmented (given medications to stimulate contractions).

But my cervix wouldn’t dilate

There are some factors that can affect your body’s ability to dilate. In most of these situations, there is a way to work through them, rather than consider your body as faulty.

When these situations are unable to be overcome, making an informed decision with the support of your care provider will help you give birth safely.

It doesn’t matter where women choose to birth, most will at some stage become focused on dilation. You may want to wait till a certain point in labour before deciding to have an epidural or let a certain person know if they need to be available or present.

It’s important to remember that dilation tells us a measurement for the here and now – it has no relevance compared to other labours or other women’s experiences, and it can’t predict the future. Cervical dilation is not a crystal ball and can change rapidly from minute to minute.

4 Reasons Not To Wait Until 12 Weeks To Announce Pregnancy

Breastfeeding And Antihistamines – What Can I Take For Allergies?

Breastfeeding And Antihistamines - What Can I Take For Allergies?