Peanut Ball – Why Every Labouring Mother Needs One

Have you heard how amazing the peanut ball is for birthing women?

Would you like a smoother, easier birth? Read on!

Most people are familiar with standard birth/yoga/exercise balls.

They’ve become more popular over the years and have many different uses.

The most popular use is for building core strength during more sedentary activities, but it’s also a great way to stay upright and active during labour.

These inflatable balls come in many different sizes.

Depending on your height and weight, the size can mean the difference between having a useful labour tool and just a really uncomfortable seat.

While the birth ball is an excellent tool, it isn’t the only inflatable device that can assist a mother during labour.

The peanut ball is like a sister tool to the birth ball, and offers some additional benefits for labouring women.

What Is A Peanut Ball? 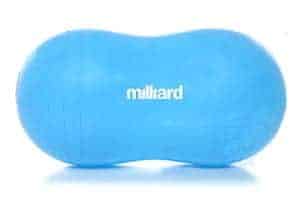 A peanut ball is made from the same materials as a birth ball, and is also inflatable.

Not surprisingly, it’s shaped like a peanut – hence the name!

Like the birth ball, it comes in multiple sizes. Your height is usually the best way to choose the right sized peanut ball.

Peanut balls larger than 60cm are typically recommended only to sit or rest on, and might not offer any more benefits than a regular birth ball.

How Does A Peanut Ball Help During Labour?

We know that being upright and active, and having asymmetrical hips can help labour to progress, and facilitate baby’s movement down the birth canal.

Often, the more active and mobile a mother is, the better her labour progresses.

We know that lying in the lithotomy position has the potential to slow labour, because:

But what if you want or need to rest during labour?

What if health concerns mean you need to be in bed?

If you have an epidural, what options do you have to help labour progress since you’re unable to be active and upright?

Well, the peanut ball can help.

This magical ball can help with aligning your hips when you need or want to be in bed.

What Does The Research Say About Peanut Balls?

One study found using the peanut ball after having an epidural reduced both the first and second stages of labour.

Placing a peanut ball between a woman’s thighs while she’s semi-reclined or lying on her side can facilitate a hip alignment that is similar to being upright.

Simply alternate resting on the left and right sides, and being in a semi reclined position, if you want some of the same benefits as active labour.

Should I Buy A Peanut Ball For Labour?

So, should you go out and buy a peanut ball for labour?

Or would a regular birth ball be sufficient?

Birth balls, pillows and other comfort items during labour, can be really helpful.

However, the peanut ball’s unique shape has additional benefits, such as hip alignment, which facilitates dilation and pelvic space.

Pillows and cushions often flatten with prolonged use, don’t offer as much support. They also might slip or change position quickly.

The peanut ball’s firm but flexible shape is comfortable, without causing any of these problems.

Contact your birthing facility or maternity care provider and find out if they offer them.

However in some cases, they might have limited numbers.

If your birthing facility doesn’t have a peanut ball, or only a limited number, you might consider purchasing one to guarantee one will be available to you.

See the most popular peanut ball available on Amazon.

Does A Peanut Ball Replace The Benefits Of Being Upright And Mobile?

While a peanut ball has been proved to be helpful during labour, especially when an epidural has been administered, there are still many benefits to labouring in an upright position.

Many labouring women find that gravity helps their labour to progress. Movement can also be a comfort technique.

Swaying, walking, and even dancing, can help reduce discomfort in labour, as well as facilitate baby’s movement into the optimal position to navigate the birth canal.

Like many comfort techniques and positions for labour, a peanut ball is one more useful item in your ‘toolbox’ to help you during birth.

What you find most helpful during labour will depend on many things.

However, knowing your options and preparing different techniques before birth can help your labour to run more smoothly.

This article’s image was sourced from this clip.