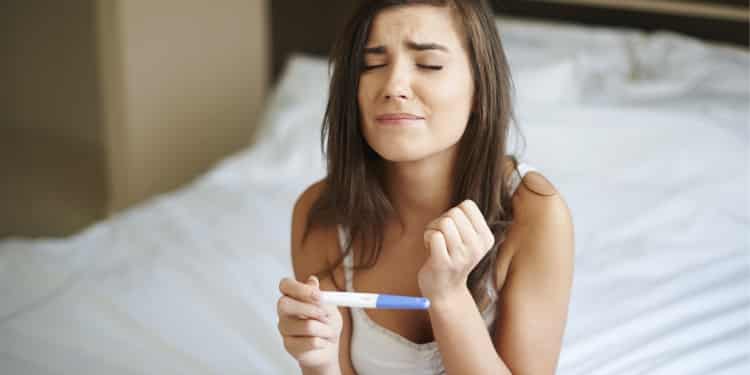 If you’re trying to have a baby, you’ll probably be on the lookout for early signs of pregnancy right after you conceive.

You’ll be counting days carefully and you know that implantation happens about a week or 8 days past ovulation (also known as 8 DPO).

If you’re searching for information about 8 DPO you might see women asking whether you can be 8 DPO with no symptoms ending in a BFP (a ‘Big Fat Positive’ pregnancy result).

Let’s take a look at what happens when you’re 8 DPO and whether it’s possible to be pregnant with no symptoms at this stage.

If you are 8 days past ovulation, often seen on pregnancy forums as 8 DPO, this is the time when implantation is expected to happen.

After conception, a fertilised egg takes between 6 and 12 days to travel to the uterus. Most commonly implantation happens on the 8th day after conception.

Can you have pregnancy symptoms 8 DPO?

If you’re trying for a baby and you know when you ovulated, you might be keenly watching for pregnancy symptoms at 8 DPO.

At this stage, there’s little difference in symptoms between a woman who is pregnant and one who is not.

That’s because, in both these situations, there are higher levels of progesterone after ovulation.

Progesterone causes both premenstrual and early pregnancy symptoms, such as:

You might experience all of these symptoms, whether you’re pregnant or not.

If pregnancy hasn’t happened, progesterone levels drop when your period arrives and any symptoms usually subside after a few days.

If you are pregnant, progesterone levels keep going up and you might experience ongoing symptoms.

Check out Pregnancy Symptoms – 16 Early Signs You Might Be Pregnant for more information.

Is 8 DPO too early to test?

According to this study, it can take up to two days after implantation is complete for levels of hCG to rise high enough to be detected by a home pregnancy test.

Timing is really the key factor for knowing the right time to test for pregnancy.

There are several things involved – when you ovulate, how long your cycle usually is, and how long a fertilised egg takes to implant.

All of these influence when your body will have high enough levels of pregnancy hormone to detect in a test.

If you’re charting for fertility, you might notice an implantation dip on your chart.

Can you have a positive pregnancy test at 8 DPO?

It’s possible to have a positive pregnancy test at 8 DPO if the fertilised egg implants as early as 6 DPO. This is rare and occurs in fewer than 0.5% of women.

What does a negative pregnancy test mean at 8 DPO?

A negative pregnancy test at 8 DPO doesn’t indicate whether you’re pregnant or not pregnant. It means there was no detectable hCG in your urine when you did the test.

If you have a negative pregnancy test at 8 DPO, wait about 3-4 more days before testing again.

Find out more about how early to test in How Accurate Is An Early Pregnancy Test?

Is it possible to have no symptoms after implantation?

It’s possible to be pregnant after a fertilised egg has implanted in your uterus and have no symptoms at all.

Progesterone is thought to be responsible for most early pregnancy symptoms. But how each woman reacts to progesterone differs.

Others don’t experience early pregnancy symptoms until they’re well past their overdue period.

Can you have a negative pregnancy test at 8 DPO and still be pregnant?

It’s quite common to have a negative pregnancy test at 8 DPO.

Remember, if conception has occurred, then implantation is likely to happen between days 8 and 9.

It takes another 2 days for hCG to be produced in high enough levels to be detected by a pregnancy test.

All a negative pregnancy test at 8 DPO tells you is that there’s no detectable hCG in your urine.

In an analysis of 93,000 menstrual cycles, fertility tracking app Fertility Friend found less than 10% of charts showed a positive test before 10 DPO.

If you’ve taken a pregnancy test at 8 DPO and it’s negative, it doesn’t mean you aren’t pregnant. The best thing to do is to wait a few days before doing another pregnancy test.

If you search online for stories about women who were 8 DPO with no symptoms ending in a BFP, you might find plenty of queries.

Many women struggle with fertility issues, or they might have experienced pregnancy loss and are hopeful of pregnancy each month.

It’s not uncommon for women to have no symptoms at all until they see a positive pregnancy test.

Many women don’t realise they’re pregnant until their next expected period is due.

“I was only 30 weeks, and my baby wasn’t ready to come yet.” Read Kiri’s amazing story

Can You Eat Sausage Rolls When Pregnant?

When Do Babies Stop Curling Their Toes?