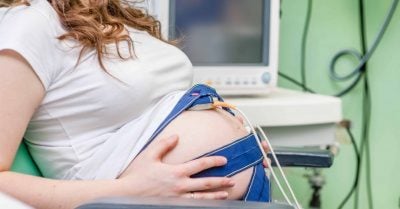 Placental abruption happens when some or all of the placenta starts to detach from the uterus wall before your baby is born.

During pregnancy placental abruption often happens very suddenly and is a medical emergency.

Although placental abruption is rare (affecting less than 1% of all pregnant women), it’s important to know about it.

#1: What is placental abruption?

Before we talk about placental abruption, let’s take a quick look at the role and function of the placenta.

The placenta is a temporary organ and develops only during pregnancy in response to conception.

To find out more about this fascinating organ, be sure to read What Is A Placenta? 10 Amazing Facts.

Placental abruption is a serious pregnancy complication that disrupts the supply of oxygen and nutrients to your baby. It also causes severe blood loss in mothers, which can be harmful.

#2: What are placental abruption symptoms?

Three main signs and symptoms of placental abruption occurs either separately or all together:

These symptoms become worse over time as the placenta separates so it’s important to seek immediate medical advice if you experience any of them – especially bleeding in the third trimester.

#3: What to do if you suspect you have placental abruption

You should always inform your OB GYN if there’s a sudden onset of bright red or dark vaginal bleeding. Take note of other symptoms like back pain or contractions.

Depending on the severity of your symptoms, you might be admitted for further investigations and observation. It’s always advisable to put on a sanitary pad, as this will give your health care provider a good idea of the colour and amount of bleeding.

#4: Is vaginal bleeding always a sign of placental abruption?

It’s always alarming to notice vaginal bleeding during pregnancy. There are many causes of bleeding and many of them are normal and expected.

Spotting is common in the first trimester and is often associated with implantation. You might experience vaginal bleeding after sexual activity, which is normal.

In the last weeks of pregnancy it’s common to see spots of blood in your underwear. This spotting is caused by burst capillaries as your cervix prepares for labour. Always take note of the colour, the amount and any other associated symptoms, like pain or discomfort. Heavy bleeding should always be reported to your health care provider.

The exact cause of placental abruption isn’t known, but there are several risk factors:

Having one or more of these risk factors doesn’t mean you’ll have a placental abruption.

#6: Can you see placental abruption on ultrasound?

To diagnose placental abruption your care provider will perform a physical examination, including a blood test, urine tests and ultrasound. Your baby will be monitored as well.

Expect your care provider to ask you about:

This information will help your care provider to make a diagnosis and plan your treatment according to the severity of placental abruption.

#7: How do you treat placental abruption?

Unfortunately, your placenta can’t be reattached or fixed, only managed. The treatment depends on how severe the abruption is and how many weeks of pregnancy you are. The health of you and your baby is also a consideration following the abruption.

Placental abruption is classified as mild, moderate or severe, according to the combination and severity of symptoms.

Depending on the severity of the abruption, you might only need careful monitoring. With severe placental abruption you’ll need to give birth immediately.

#8: Can a baby survive placental abruption?

Partial separation is a serious complication and requires immediate medical attention. The treatment and outcome depend on the severity of the abruption and how many weeks of pregnancy you are.

If the bleeding is mild you’ll be admitted to hospital to monitor the amount and colour of your bleeding with regular pad checks. Your baby will be monitored using a handheld doppler or CTG (see more about monitoring here) for signs of fetal distress. Your doctor will check to see your baby is getting enough oxygen.

You might be offered steroid injections to strengthen your baby’s lungs and prevent respiratory distress if there are signs of premature labour.

You might be discharged home with instructions to take it easy as long as:

Complete separation of the placenta is a medical emergency and can be fatal. If the placenta separates completely from the lining of the uterus, your baby won’t get enough oxygen and nutrients.

Swift medical attention is required to stop the bleeding and deliver the baby.

#9: Is a vaginal birth possible with placental abruption?

Something many women wonder is if it’s possible to still give birth vaginally with placental abruption. This depends on the severity of the bleeding and your baby’s health.

Labour will be stalled for as long as it’s safe to do so. An emergency c-section is often necessary if the bleeding persists or worsens, or if your baby shows signs of distress.

The closer you are to 37 weeks, the more likely you can attempt a closely monitored vaginal birth. This will be closely monitored so that if the placenta separates, your health care providers can act immediately to keep you and your baby safe.

A vaginal birth isn’t usually possible if the bleeding is severe. In most cases, an emergency c-section will be performed to save the life of your baby.

#10: Is it possible to miss a placental abruption?

Sometimes the bleeding remains hidden between the separated lining of the uterus and behind the placenta. This is called a ‘silent abruption’ and it can go unnoticed unless it’s accompanied by abdominal pain and tenderness.

The blood collects behind the placenta and next to the lining of the uterus, causing a retroplacental clot (‘retro’ means ‘behind’). This can sometimes be seen on ultrasound or is diagnosed after birth.

The amount of pain experienced depends on the severity of the abruption. A mild partial separation might cause tenderness that feels like a bruise. A more severe separation is acutely painful and the pain persists until treated.

Seek medical advice for any pain or tenderness that starts suddenly and feels abnormal, even if there is no bleeding.

#11: Can you prevent placental abruption?

As mentioned, we don’t really know what causes placental abruption to occur but there are risk factors linked to this pregnancy complication.

A healthy placenta means a healthy pregnancy and a healthy baby, as well as a positive birth experience.

The increase can be sudden or gradual. If preeclampsia is left untreated the symptoms can worsen and lead to seizures.

In a retrospective study by the American Heart Association, 265 cases of abruption were reviewed. The incidence of placental abruption was highest with eclampsia (23.6%), followed by chronic hypertension (10.0%) and pre-eclampsia (2.3%). This data suggests hypertension is associated with increased risk of abruption and that the degree of risk is dependent upon the type of hypertensive disorder.

Can smoking cause placental abruption?

Cigarette smoking has many unwanted side effects during pregnancy and has been shown to increase the overall risk of placental abruption.

This study showed the risk of abruption to be increased by 40% for each year of smoking prior to pregnancy.

Blunt trauma to your belly during pregnancy, especially in the third trimester, can increase the risk of placental abruption. Blunt trauma is any injury caused by a forceful impact, such as a motor vehicle accident, an accidental fall on a hard surface, or a physical attack with a blunt object.

When travelling by car it’s important to wear your seat belt correctly to protect you and your baby. The shoulder belt should extend snugly across your chest and away from your neck. There should be no extra slack at all. The lap belt should be secured below your belly and fit snugly around your hips and pelvic bone.

#12: Can you have a baby after placental abruption?

Yes, absolutely, you can have another baby. It’s important to inform your care provider of your medical history. A previous placental abruption is a known risk factor for subsequent abruption. It doesn’t mean it will definitely happen again though.

You’ll be advised to take it easy during pregnancy. You might even be placed on bed rest if you have any bleeding after the second trimester. Your blood pressure will also be carefully monitored throughout your pregnancy.

Trained as a midwife, Karen now works as a keeper of ancient birth wisdom and traditions. She has one foot firmly planted in the wonders of nature while the other ventures into the wonders of modern medicine. She strives to find the balance between the vast amount of information that technology affords us with her deep trust in pregnancy and physiological birth. Karen loves sitting at her writing desk in Cape Town, South Africa and connecting to women around the world through her writing. If she is not at her desk you will find her singing, sailing, swimming or sewing.