How Long Does Early Labour Last? What You Should Know 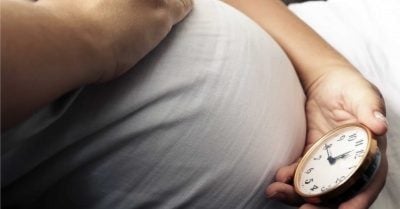 How long does early last? Often the reply is ‘How long is a piece of string?’ meaning that early labour can vary from woman to woman.

For most pregnant women, a warm shower, birthing ball, massage, hypnobirthing and a heat pack are their ‘go to’ ways to ease pain in early labour.

Make sure you have a support person close by; you might also want to send your midwife a quick text message that you think labour could be imminent.

You will most likely have some time before you need to head to the hospital or birthing centre. You won’t need to head anywhere, of course, if you’re birthing at home.

If you think you might be in early labour and wondering what you should know, then this article is for you.

How long does early labour last?

The birth of your baby is a unique experience. No two births will be the same. There’s no way to predict how long your labour will last.

We know that first time moms might labour longer, as their bodies are learning to use all the muscles for birth. Generally, second babies arrive more quickly, as the body has muscle memory of the first birth. Having said all that, however, it is not always the case.

If they are planning to birth in the hospital, most women will remain at home in early labour, to improve the outcomes of the overall birth experience; they will feel more comfortable in their own space.

The stages of labour are based on a medical model of birth. In hospitals, there are set times attached to each stage, and care providers expect women to follow this pattern. It is an outdated and highly medicalised model of care.

In other settings, such as in home births, there is less focus on how long a stage takes and more focus on being with the women. It is care associated with a strong belief in physiological birth.

Labour is divided into three stages:

What is early labour?

Early labour is sometimes the longest stage of labour as your body is taking its time to prepare you for active labour.

For some women, especially with a first baby, early labour can be experienced ‘on and off’ over a period of time until they get into established labour.

In the hospital setting, there is a lot of emphasis placed on how many centimetres the cervix is dilated. At a home birth, the midwife probably won’t need to do a vaginal exam as she can observe other signs that labour has progressed.

The hospital staff require you to have regular vaginal examinations. This allows the care provider to measure your cervix to ensure that your labour is progressing. This is considered normal in the hospital or birthing centre.

It is quite common practice in hospitals, despite there being no evidence to support the use of vaginal examination in labour.

Vaginal Examinations – 7 Things You Should Know

Premature Rupture Of Membranes – When Your Water Breaks Prematurely

What Is Active Phase Of Labor? What You Should Know.

What’s the difference between prelabour and early labour? Aren’t they the same thing? The short answer is ‘No’.

Prelabour is the stage before labour really begins.

You might have irregular tightenings of the uterus, which act on the cervix.

The cervix can become soft and thinner; this is called effacement.

The main difference between prelabour and early labour is prelabour doesn’t progress into established labour.

The tightenings will stay at the same length, intensity and frequency. They can also come and go at irregular times, disappearing after a few hours.

In early labour, contractions can be irregular but will stick around and eventually settle into a pattern. They will increase in strength and frequency.

It’s hard to know how long early labour lasts. And how long prelabour is won’t give you any hints.

We think you will like to read 7 Reasons Why Pre-Labour Sucks.

What are the early signs of labour?

Most very pregnant women spend a great deal of time analysing their every twinge for signs of early labour.

Here’s a quick rundown of the more obvious signs of early labour:

You might be interested in Signs Of Labour – 7 Signs You May Be In Labour for more detailed information about signs of early labour.

During prelabour, you might feel a tightening sensation rather than physical pain.

This is because the uterus is not yet acting on the cervix to dilate it. Rather, the cervix is softening and thinning in preparation for dilation.

In early labour, when the surges start to open the cervix, you might feel a sensation similar to menstrual pain.

It can vary, depending on how you experience menstrual cramps. Some women notice an aching, cramping feeling in the whole pelvis.

Others might feel it quite localised where the cervix is, low down behind the pubic bone.

For more information, you can read What Do Contractions Feel Like?

How long does early labour last?

The question on every pregnant woman’s mind is how long is labour going to last?

The answer is, no one knows. The length of labour is different for every woman and every pregnancy.

It depends on a number of factors, such as:

The first stage of labour is usually the longest. A first-time mother will generally experience 6-12 hours of first stage labour, with the average length being about 8 hours.

The length of labour is usually counted from the beginning of active labour and doesn’t include early labour.

The hospital staff will record that as the beginning of labour and not include the time of early labour in their data.

Early labour itself might last between 8 and 12 hours. This sounds like a long time, but remember, this is when your body is shifting into labour.

Surges are mild and likely to be irregular. They last for about 30-45 seconds, with anything from 5 to 30 minutes of rest between contractions.

Labour builds over time, and surges will slowly increase in frequency and intensity.

As mentioned earlier, labour is different for each woman. It can also vary between each pregnancy you have and subsequent pregnancies. It’s not uncommon for labour to be shorter in a second pregnancy.

The signs are the same as those in any other labour: cramping, a bloody show or your waters breaking.

Women who are having their second baby often notice prelabour is just as long as it was in their first birth. When labour gets going, though, it can move along quite quickly to transition and birth.

How to speed up early labour

Many women in early labour have the idea they should do something to speed things up.

They’re excited and just can’t wait to meet the new baby. Or perhaps they are afraid to think about how long early labour might last.

They worry about being in pain for hours and hours.

Well-meant advice from family and friends will come flooding in: go for a walk, bounce on the birth ball, climb stairs… the list of ways to try to speed up labour is endless.

In fact, there is really no need to try to force early labour to speed up. The early stage of labour is there to prime your body and brain for the work ahead.

Your brain is receiving the signals it needs to start producing more hormones. Oxytocin receptors in your uterus are reaching maximum levels.

Think of this stage as preparing for a marathon. You don’t start a marathon by sprinting from the starting line.

By the time you were halfway into the race, you’d be exhausted and too tired to go on.

Doing too much during the early stage of labour can lead to the same thing. It also undermines your state of mind.

By trying to hurry things up, you’re keeping your neocortex (the thinking brain) active.

Instead, for labour to progress well, you need to quieten your thinking brain and let your primal brain take over. Have a warm bath and stay relaxed

You can read more in Undisturbed Labour – What Is It And Why Aim For One?

What to do during early labour?

There is no need to ‘do’ anything during early labour.

Most pregnant women want to stay at home, in their own safe environment, where they can work through their emotions during this exciting time.

Unless you have medical concerns, staying at home in early labour is the best advice.

You can rest, play your favourite music, have a bath or lie in the sun in your backyard. There’s no limit to how you can pass the time in early labour if it makes you feel good.

Avoid thinking about how long early labour lasts and enjoy this time, as you get ready to meet your baby.

If you’re not sure what to do, there’s some great information in Early Labour – 8 Tips For A Low Stress Early Labour At Home.

When your early labour begins, it might only be slight tightenings and you won’t require any pain relief.

Your breathing exercises and hypnobirthing work really well along with the non-pharmacological pain relief mentioned above.

Some women might require some paracetamol in early labour; it is safe to take and has no teratogenic effects (no harmful effects) on baby.

The TRUTH About Natural Birth
MAXIMISE your chances of getting the birth you want… MINIMISE your chances of
a disappointing or traumatic birth experience. Learn from some of Australia’s
best educators – you’ll feel MORE CONFIDENT heading into birth.
CAN YOU HANDLE THE TRUTH? Click to find out…
Previous Post

When Do Babies Sit Up?