If you’re trying to get pregnant, you’re probably on the lookout for ovulation symptoms, in order to work out what day you’ll ovulate.

Once you’ve identified it, you can then have intercourse, and hopefully, it results in a pregnancy.

Bear in mind that when you do ovulate, you only have a short window of time to conceive before the egg starts to die.

Therefore, to optimise your chances of conception, it’s important to understand your cycle.

Let’s start by looking at the important basics of your cycle, as well as the signs of ovulation you might expect.

Understanding your menstrual cycle can be a great deal easier if you know what you’re looking for.

You don’t need to be an expert! You can become knowledgeable enough to be able to detect ovulation after just one cycle.

With such simple, yet wonderful knowledge, you could shorten your journey to becoming pregnant.

From day 1 of your menstrual cycle (when your period begins) until ovulation, this is called the follicular phase.

From ovulation until the end of your period, is called the luteal phase, which usually lasts 12 to 16 days.

The day of ovulation will determine your cycle length, not the first day of your period.

Charting your cycle daily will help you to work out the lengths of your follicular and luteal phases, which is handy information.

And when you DO finally conceive (fingers crossed!),
it will be important you understand your pregnancy.
Be sure to join our Pregnancy Week by Week when that time comes!

What causes ovulation in your body?

Your ovaries are amazing almond-shaped organs.

They develop egg-containing follicles in preparation for ovulation.

Every cycle, Follicle Stimulating Hormone (FSH) promotes the development of around 5-12 follicles.

The most dominant follicle gets released at ovulation.

As a result of high estrogen levels in your blood, Luteinising Hormone (LH) triggers ovulation in your body.

Ovulation occurs around 12-24 hours after the LH surge when the mature follicle bursts through the ovarian wall.

If sperm is waiting for the egg, or if you have intercourse at this point, you could very well get pregnant.

For 90% of women, cycle length can vary from 23-35 days, with ovulation occurring mid-cycle.

Other factors (e.g. stress) can result in ovulation being delayed, until as late as the third or fourth week.

However, the way our care providers calculate pregnancy due dates is by assuming ovulation on day 14 of a 28-day cycle.

You can already see a major reason why due dates aren’t so accurate!

A normal, healthy menstrual cycle should be about 26-32 days in length.

Find out more about what a healthy menstrual cycle should look like, and when you might need help to resolve any issues.

Do women ovulate every month?

Not all women ovulate every month. If an ovary does not produce a mature follicle, ovulation does not occur.

This is called an anovulatory menstrual cycle.

The endometrium (the lining of your uterus which builds up in preparation for pregnancy) develops as usual, but no egg is released.

A small percentage of women might release two or more eggs within a 24 hour period.

It isn’t possible to release more eggs after this time, due to hormonal changes in the body.

Once an egg is fertilized, hormones will prevent any future eggs being released, in order to protect and nurture the pregnancy.

There are several ovulation symptoms you might notice. These include (in no particular order):

The most uncomfortable ovulation symptom for some women is ovulation pain or mittelschmerz – a German word meaning mid (mittel) pain (schmerz).

For these women, ovulation causes a sudden, constant pain in their lower abdomen.

It’s important to understand that painful ovulation is not normal. A mild sensation is normal, but pain is not.

It could be a sign you have ovarian cysts, adhesions from previous abdominal surgery, or other health issues.

Ovulation pain should be investigated right away, especially if you’re trying to conceive.

Pain when ovulating can be a symptom of a medical problem that can result in infertility.

In order to notice a drop in your basal body temperature, you need to chart your cycle daily.

This means taking your temperature every morning upon waking (close to the same time every day).

Charting plays a key role in understanding your cycle and identifying what your body is doing and what it normally does.

If you haven’t been charting your cycle previously, this information won’t be helpful for this cycle.

But now is a great time to start.

Read our article, Charting Your Cycle For Conception, and in future, you will be able to spot a slight body temperature drop before you ovulate.

You will need a basal thermometer.

Basal thermometers are specifically designed for measuring slighter than normal fluctuations in temperature.

There are quite a few ‘fertility’ thermometers on the market, but as long as you choose a basal thermometer, you’re set.

After ovulation, you will notice your temperature normally rises and stays that way until your next period.

If you become pregnant, your body temperature stays higher.

This is how some women know when to expect their period, noting a drop in temperature around the time their period is due.

Observing your cervical mucus several times a day is also important, as this is one of the more reliable ovulation symptoms.

Your mucus changes in response to being at fertile or infertile stages of your cycle.

It’s also a good indicator of when your fertility has returned after having a baby.

Following a period, mucus will typically be dry before becoming sticky.

The mucus will then become creamy, then watery, before its most fertile state – clear, slippery, and stretchy.

This best aids the sperm on its passage to the egg, and provides alkaline protection from the vagina’s acidic environment.

As you get older, you will have fewer days of egg-white cervical mucus (EWCM).

For example, a woman in her 20s might have up to five days of EWCM, whereas women in their late 30s might have one or two days at most.

For more information, look at our Cervical Mucus Observations article.

Your cervix gives away some fantastic clues as to when you are fertile.

Checking your cervix position is a helpful tool to work out when ovulation is near.

You’ll probably need a few cycles to get the hang of it and understand all the variations and changes in your cervix.

Make sure you check the position of your cervix at the same time each day because your cervix doesn’t remain in one spot all day.

Always wash your hands before you check your cervix.

Just like your cervical mucus, the cervix is clever and changes to optimize the chances of conception.

When you’re not fertile, you’ll notice your cervix feels low, hard (like the tip of your nose), and dry.

However, they’re not as reliable as the above symptoms:

There are some ovulation prediction tests on the market. They can help detect changes in your body that signal ovulation is near.

Two of the most common are: 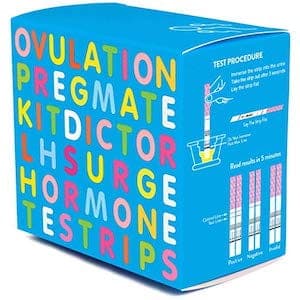 An ovulation prediction test works like a pregnancy test!

Only, it measures your levels of luteinizing hormone, which indicates that you will be ovulating in the next 12-24 hours.

To use them, simply:

1: Immerse the test strip into your urine

2: Take the test strip out after 3 seconds

4: Read your result in 5 minutes

If it’s positive… it’s time to go make a baby!

Click here to see the best-selling OPKs on Amazon.

Ovulation microscopes can also be purchased online and from pharmacies.

These handheld mini-microscopes enable you to observe the pattern of a dry saliva sample.

When you’re fertile, the saliva appears to be ‘ferning’, a different pattern from when you are infertile.

The MaybeBaby microscope is the most popular and well-known on the market.

If you want to work out your most fertile days based on your cycle dates, give our ovulation calculator a try.

Simply enter in the last date of your menstrual period, as well as your usual cycle length.

It’ll predict your upcoming fertile days. Along with other ovulation symptoms to look for, you’ll have some great tools to speed up your path to conception.

Sperm can survive inside a woman for about 3-5 days. Therefore, having sex before ovulation has even occurred might result in a pregnancy.

There’s no need to have lots of sex and time things to the very minute you ovulate.

This just makes sex functional instead of enjoyable, which will quickly wear out its welcome.

If you chart your cycle and get to know when you normally ovulate, you can enjoy a passionate night with your partner and know that you’re giving yourselves a very good chance of pregnancy.