Tea During Pregnancy – 6 Pregnancy Safe Teas and Teas To Avoid

If you’re a tea drinker, you’re most likely curious if it’s safe to drink tea during pregnancy.

You probably want to know if there are any teas you need to avoid too.

With all of the warnings about consuming caffeinated drinks during pregnancy, many pregnant mamas-to-be can be a bit hesitant to consume their favorite tea.

So, is tea safe during pregnancy? And if so, what teas are safe?

No matter if you’d like to enjoy an occasional cup of herbal tea during pregnancy, or your usual English Breakfast tea, we have the answers for you.

Nicole Tracy, a naturopath from Nurtured By Nature has given the consumption of most herbal tea during pregnancy the safe-tea tick of approval!

“Overall, herbal teas are generally very safe to consume, and most often beneficial during pregnancy. This is as long as recommended doses are not exceeded. Because you’re drinking an infusion or decoction of the leaves, flowers or roots of a plant, it’s not as potent as consuming the plant in its entirety,” Nicole states.

And in fact, according to Nicole, drinking tea while pregnant even has a few additional benefits!

But of course, there are some teas which are best avoided during pregnancy too.

Benefits of drinking tea during pregnancy

According to Nicole, caffeinated drinks have a diuretic effect, reduce nutrient absorption and deplete the adrenal glands.

They’re also packed with antioxidants and vitamin C which helps lower your anxiety and stress levels.

Various types of herbal teas can also reduce morning sickness symptoms and even prepare the uterus for labor. There are even special teas for pregnancy!

Well, you sold us at ‘no more morning sickness’.

So which teas are best for pregnant sippers?

Are You Getting BellyBelly’s Pregnancy Week By Week Updates?
We think they’re the best on the internet!
Click to get the FREE weekly updates our fans are RAVING about.

What teas are safe during pregnancy?

Here’s a pregnancy-safe tea list, so you know which teas are safe to drink during pregnancy.

Ginger is a warming digestive herb, a circulatory stimulant, anti-nausea, and a great source of zinc.

Nettle leaf tea is described by Nicole as being a brilliant nutritive tea to sip whilst pregnant, especially as you near the end of your pregnancy.

It provides high levels of water-soluble iron, magnesium, and calcium.

Stick to one or two cups a day, or drink in a blend with other herbs.

Raspberry leaf tea during pregnancy prepares the uterus for labor due to its rich mineral content. That’s why it’s one of our favorites at BellyBelly!

It also helps to prevent post-partum hemorrhage due to its gentle astringent effect.

Raspberry leaf tea was traditionally used in late pregnancy to prepare for birth and breastfeeding.

Raspberry leaf is also a galactagogue, so it supports breast milk production.

According to Nicole, this herb is also high in calcium, magnesium, and iron.

Raspberry leaf tea is safe to drink from the second trimester onwards.

“I usually recommend women drink one cup per day from 26 weeks. Then they can build up to two cups at 30 weeks, three cups at 36 weeks and 3-4 cups from 37 weeks.” Nicole suggests.

“Dandelion leaf tea is a wonderful support in late pregnancy when fluid retention is an issue,” Nicole says.

She explains that dandelion leaf tea is high in potassium and has a gentle but effective diuretic effect.

It’s also considered to be a kidney tonic and gentle digestive and is alkalizing.

Nicole suggests adding a dandelion leaf to another tea such as spearmint or chamomile, as it has a slightly bitter, grassy taste.

#5: Spearmint and peppermint tea during pregnancy

Spearmint and peppermint tea during pregnancy is great for relaxing your stomach muscles.

They’re great to help settle an upset stomach. These mint teas also help with nausea and vomiting, which is common in early pregnancy.

Spearmint is preferred to peppermint tea as it doesn’t increase reflux (as peppermint can).

Both are pregnancy safe teas and are fine alone or in blends.

Nicole thinks this is the best tea for pregnancy and switches most of her die-hard tea drinkers to rooibos during their pregnancies.

Of all the herbal teas, its taste is most similar to traditional black tea.

Rooibos is caffeine-free, contains calcium, magnesium, and loads of antioxidants.

It also has positive effects on digestion and can ease colic and reflux.

Unlike black tea, rooibos is not high in tannins, which reduce nutrient absorption.

It’s lovely with milk of your choice and a little honey.

Rooibos is also a great base for caffeine-free chai or iced tea. 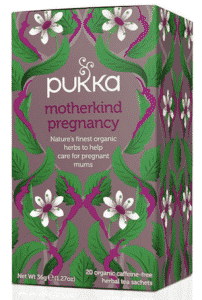 You can now purchase special blends of pregnancy tea!

Pregnant mothers-to-be give Motherkind Pregnancy Tea the big thumbs up, rating it a 4.7 out of 5.

Some reviewers have said:

“This tea is delicious and affordable. Used throughout my pregnancy.”

Teas to avoid during pregnancy

According to research, caffeine consumption during pregnancy (particularly over has 200mg) has been directly linked with reduced birth weights.

According to this study:

“Caffeine is rapidly absorbed and crosses the placenta freely. After ingestion of 200 mg caffeine, intervillous blood flow in the placenta was found to be reduced by 25%. Cytochrome P450 1A2, the principal enzyme involved in caffeine metabolism, is absent in the placenta and the fetus.”

If you’re also a coffee drinker, the news is even worse! Coffee was associated with an even longer pregnancy – 8 hours longer for every 100mg of caffeine per day.

This research illustrates the importance of keeping an eye on caffeine consumption during pregnancy. For this reason, teas which are particularly high in caffeine should be restricted while you are pregnant.

Teas to avoid during pregnancy include:

Wondering why it’s probably not a good idea to drink green tea during pregnancy?

If you’re a green tea lover, consider limiting yourself to maximum one cup a day, or try sourcing a caffeine-free green tea.

There is still some discussion concerning how safe green tea is for pregnant women.

Chai tea contains caffeine, but 1-2 cups per week are okay.

You can purchase dandelion chai at organic shops and healthy cafes, which is caffeine-free and great for your liver.

Teas and herbs to avoid during pregnancy due to their risk of side effects include:

Otherwise, stick to the pregnancy safe tea list and feel free to sip away.

If you’re a coffee drinker and wondering how much you can have, check out our article here.

Please speak to your naturopath or herbalist if you have any concerns about which teas are safe to drink during pregnancy.

The TRUTH About Natural Birth
Want To Know What Hospital Birth Classes WON’T Tell You?
Click to find out more!
+ Popular Questions Our Readers Ask

Q: How do you prevent a faint line on your pregnancy test kit?

A: In order to prevent a faint line on your pregnancy test kit, be sure to take the test at the time when you would expect your period to arrive. By that time, hormone levels will be high enough, giving you a more accurate result and a darker line on the test kit.

Q: How do you conceive a boy?

A: There are various theories for those who want to conceive a boy. One of these is for the male to wear loose underwear, rather than tighter, restrictive underwear. Another recommendation is to have intercourse on the day before ovulation, to favor male sperm.

Q: At what age do babies talk?

A: Anytime between the ages of 11 months and 14 months is usually when babies start talking. The first words to come out of their mouths at this stage are usually ‘mama’ and ‘dada’.

Q: Is tea bad for you when pregnant?

A: If drinking tea is something you enjoy and you’re currently pregnant, you might want to know if it’s safe to continue drinking it. Well, in general, you can continue drinking safe herbal teas within the recommended doses. However, caffeinated teas such as green tea and black tea should be avoided.

Bleeding After Sex While Pregnant

Hair Loss After Baby – What’s With All This Loss of Hair?!

Hair Loss After Baby - What's With All This Loss of Hair?!