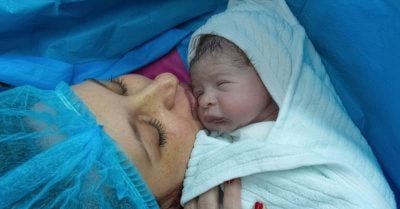 C-section is one of the most commonly performed major surgeries performed around the world.

The World Health Organization estimates about 18.5 million c-sections are performed every year worldwide.

There’s no doubt when done as a matter of medical necessity, this surgery saves the lives of mothers and babies.

During the last decade, however, the rate of c-sections has increased steadily, which many health care experts find alarming.

Why so many women have major abdominal surgery to give birth is now one of the most hotly debated topics in maternity care.

New research from Australia has found there are two main reasons for first-time c-sections. The study has made recommendations for these issues to be addressed, and for urgent changes to be made.

What did the research find?

The researchers analyzed data collected from public hospitals in Queensland. The study included almost 100,000 women, who were either having their first baby or previously had a vaginal birth.

The data showed the main reasons recorded by doctors for primary or first-time c-section were abnormal fetal heart rate (23%) and inadequate contractions (23%).

The research also revealed the interventions that were most likely to lead to the reasons for c-sections:

From this, the researchers were able to pinpoint induction of labor and epidural as the two main causes of problems that resulted in first-time c-sections.

They recommended an urgent review of hospital policies on induction and epidural use, given their clear link to first-time c-section.

They also concluded women must be provided with clear, evidence-based information about induction and epidural to ensure they could make informed decisions before consenting to either intervention.

Why c-section, not vaginal birth?

All the evidence available today shows c-sections have a much greater risk and longer recovery than vaginal births, for both mothers and babies. Despite this knowledge, the c-section rate keeps climbing.

Medically necessary c-sections are lifesaving when there’s a significant risk of serious injury or death for either mother or baby.

In these situations, the risks of a c-section would be considered against the risk of serious injury or death to either mother or baby.

The World Health Organization recommends a c-section rate of 10-15%. In countries such as Australia, the US, and the UK, however, c-section rates are double the upper limit of 15%.

This suggests half of those surgeries are unnecessary, and mothers and babies are being exposed to risks that don’t outweigh the benefits of the procedure.

Why do c-sections happen so often?

According to data collected by Australia’s Institute of Health and Welfare, for Australian women, the risk of having their first baby by c-section is 37%.

In Australia, it’s estimated that 97% of women birthing in hospitals will have some form of intervention during pregnancy and birth.

Hospitals have systems and policies, which improve patient safety but also put pressures on birthing women, which affects their birth choices and outcomes.

These sorts of pressures start with something as simple as being overdue and being booked for an induction. Or having continuous fetal monitoring because the maternity ward is busy and the midwife has other women to care for.

Sometimes induction is medically indicated and continuous fetal monitoring is essential. But for the vast majority of women who have healthy pregnancies, these interventions interfere with the normal process of birth.

These women are also very unlikely to be unaware of the increased chance of having a c-section.

The result is what is known as a cascade of interventions, leading to a c-section as the only option.

Read The Cascade Of Intervention – What You Need To Know for more information.

Many women who have a c-section are told it is because of failure to progress or fetal distress.

But the interventions that resulted in failure to progress or fetal distress are often overlooked or not mentioned.

Women are rarely supported in a way that helps them understand what causes labor to start. They are routinely induced by 41 weeks, scared by the possibility their baby will be stillborn if they aren’t.

Hospitals are noisy and bright and filled with strangers, which interrupts the hormones in labor that allow birth to unfold naturally.

The staff is busy and often looks after more than one mother at a time. They’re trained to act early on any potential warning signs and to actively manage labor to fit in with policy and protocol.

All these factors lead to stalling or failing to progress, and the need for synthetic oxytocin to get contractions going. Fear floods the pregnant woman’s system, adrenaline acts against the oxytocin, and contractions falter more.

Under pressure, a woman tenses up, and contraction pain becomes excruciating, so she has an epidural. As a result, her movement is then restricted, which affects her baby’s heart rate.

Fetal distress is then picked up and suddenly there’s more urgency to give birth. She can’t push because of the epidural or she’s unable to get into a position that helps her push effectively.

Within a short space of time, she signs consent forms for a c-section and is grateful her baby is ok.

It’s not until later that many women start to feel something’s not quite right. Most women put on a brave face. They are constantly told a healthy baby is all that matters, and it doesn’t really matter if they weren’t able to birth vaginally.

A c-section that was very likely avoidable, along with the recovery and future risks, is a big thing to try to get over.

The experience is compounded by the medical profession’s use of terms such as ‘failure to progress or ‘inadequate contractions’, which imply there was something wrong with your body.

Why are primary c-sections a problem?

Recommendations from 40 years ago warned against letting women labor after having a c-section. This was thought to protect them from the risk of uterine rupture. Care providers and hospitals routinely scheduled women for repeat c-sections. This drove the rates up and coined the phrase ‘Once a c-section, always a c-section’.

Recommendations for repeat c-sections have changed since then but the factors that influence whether a woman is likely to have a c-section in the first place still remain.

Care providers’ attitude and support are, by far, among the biggest drivers of whether or not a woman will have a c-section. Maternity care providers who believe birth is a normal life event will avoid using intervention unless medically necessary.

Many care providers, though, are trained to manage labor and birth to prevent potential adverse outcomes. This means they will use intervention before it is medically necessary, which increases the risk of further problems.

Your first birth sets the tone for all future pregnancies and births and has a huge impact on your emotional and physical health in the short and long term.

4 Reasons Why Your First Birth Is Particularly Important has more information.

What do we do with this information?

Women who birth at home or in a birth center, with a primary midwifery care model, have much lower rates of epidural use and oxytocin augmentation (where medication is used to speed up contractions).

Primary midwifery care consistently shows fewer interventions with more positive outcomes. Pregnant women are cared for throughout pregnancy and birth by one or more known midwives.

Women who birth at home or in birth centers feel safe and supported, and birth is allowed to unfold naturally.

Read Midwives Getting Better Results For Birthing Women to learn more about this model of care.

This Australian study, one of the largest of its type in the world, showed that women who have a known midwife:

This is exactly the way every woman should experience the first time she becomes a mother. It also means future pregnancies and births are more likely to have positive outcomes.

Birth is a normal process. Intervention at any stage affects your body and your baby. It potentially disrupts the natural process, making more intervention necessary to bring things to a conclusion that focuses only on mothers and babies being alive.

To avoid an unnecessary c-section, choose care providers and birthplaces that actively demonstrate a belief in birth as a normal process.

Dilation And Curettage | What To Expect

Dilation And Curettage | What To Expect