No Result
View All Result
Home Pregnancy Week By Week 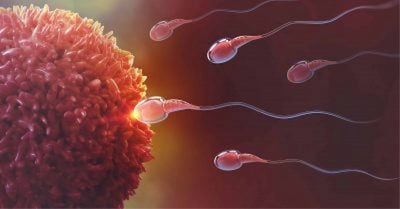 The length of pregnancy is worked out by adding 280 days to the first day of your last menstrual period (LMP).

Therefore, two weeks after your last period, you haven’t actually conceived yet.

This calculation is based on the assumption your menstrual period arrives exactly every 28 days, and you ovulate on day 14. The thing is, not everybody does.

This is one of the reasons why estimated due dates (EDDs) are often inaccurate, as everyone’s menstrual cycle is different.

In fact, the timing of ovulation and, therefore, conception varies from woman to woman.

If you haven’t used a pregnancy calendar yet, and you’d like to try to work out your due date, check out BellyBelly’s due date calculator.

You can also calculate your due date using what’s known as Naegele’s rule.

For more on this topic, be sure to read Why Only 3-5% of Babies are Born on Their Due Date.

If you’re actively trying for a baby, you’ll need to watch out for signs of the fertile period in your menstrual cycle.

When to have sex to conceive

Although sperm typically survive for about 72 hours, healthy sperm can survive for up to five days, in the right environment.

An unfertilized egg, however, will survive for only about 24 hours after being released.

That means timing is pretty important. Aim to have sexual intercourse at some time between 3 days before and 1 day after ovulation.

Maximize your chances of becoming pregnant by knowing the Best Sex Positions to Conceive a Baby, which encourage an ‘egg-meets-sperm’ situation.

Every month, your chance of becoming pregnant is about 20%.

The wait can be challenging if you’re actively trying for a baby and it’s taking a while. It might be reassuring to know about 90% of fertile couples will achieve a pregnancy within 12 months.

Don’t worry if you don’t have a positive pregnancy test this month; it’s still possible next month.

Just because you don’t fall pregnant straight away doesn’t mean there’s anything wrong, or you won’t go on to have a healthy pregnancy in the future.

Your body has been preparing for the possibility of a fertilized egg by forming a blood-rich lining, known as the endometrium, in your uterus.

Follicle-stimulating hormone (FSH) begins to stimulate the growth of follicles (eggs) in the ovary before a mature one is released.

Later this week an ovary will release one egg and it will be swept up into the fallopian tube, ready for any potential sperm to fertilize it.

If you’re not confident you’ll recognize your fertile signs, you can use an ovulation predictor kit (OPK).

There are two types of ovulation test:

What happens in the second week of pregnancy?

If you do conceive straight away, you won’t know about it for at least another week or so.

It’ll be your body’s best-kept secret.

Although you might not know you’re pregnant, your body definitely will.

On average, it takes a fertilized egg 6-10 days to make the journey from the fallopian tube to the uterus.

Once it’s landed in the uterus, it will implant, burrowing into the thick lining of the endometrium.

Only when implantation has occurred is the pregnancy considered ‘official’. Congratulations!

If you’re watching out for signs of pregnancy, you might notice implantation cramping. Not every woman experiences this but some report feeling some twinges around the time of implantation.

Can I take a pregnancy test at 2 weeks pregnant?

The tissue making up the placenta will begin to secrete a pregnancy hormone called human chorionic gonadotropin or hCG.

This is the hormone a home pregnancy test will pick up around the time of your missed period.

At 2 weeks pregnant, however, hCG levels can’t be detected, because implantation has to happen first.

It’s only after implantation that pregnancy hormones will be released.

At 2 weeks, it’s too early to take a test. Even if you had conceived, you’d still get a negative result.

Check out How Early Can You Take A Pregnancy Test? to find out more.

What are the signs of pregnancy at 2 weeks pregnant?

Because hCG isn’t being produced yet, you won’t be able to detect any early signs of pregnancy.

Most women don’t realize they are pregnant until their missed period a couple of weeks later.

More than likely, you’ll be feeling absolutely normal, without any symptoms.

You won’t suspect anything at all.

Make the most of this breezy couple of symptom-free weeks; everything could change a few weeks from now.

Can pregnancy symptoms start at 1 week?

The first week of pregnancy is too soon to begin feeling early pregnancy signs. Remember, pregnancy doesn’t actually occur until after you ovulate, around week two.

Pregnancy hormones can’t even be detected, so there’s no chance of any telltale signs just yet.

But don’t worry; it won’t be long before you’re dashing to the bathroom, or complaining of sore breasts and heading out to buy a new ultra-supportive bra.

Enjoy this time while it lasts.

When do pregnancy symptoms start?

Typically pregnancy symptoms start around pregnancy weeks 5-6 for around 71% of women. Not everyone will experience them, but the majority of us will to some degree.

Research suggests nearly 90% of women will experience symptoms within 8 weeks of their last menstrual period.

It’s very unlikely you’ll have an ultrasound at 2 weeks unless your doctor is concerned you might not be ovulating.

Your first ultrasound isn’t likely to be for at least another month from now. Most women have their first scan somewhere between 6 and 12 weeks, depending on their situation.

Speak to your healthcare provider if you have particular concerns about your health or your baby’s health.

Can you see a baby at 2 weeks on an ultrasound?

If you were able to see inside the uterus at this stage, there wouldn’t be a baby in there yet.

A tiny mature egg, about the size of a small grain of sand, has been released and sucked up into one of the fallopian tubes.

How big is a 2 week old fetus?

At this stage, the egg fertilized by the sperm (also known as a zygote) is too small to see.

In these very early days, the single cell has not yet begun to divide into multiple cells.

Fertilization must occur within 12-24 hours after ovulation for pregnancy to be successful.

If you’ve had unprotected sex in the last 5 days, there might be living sperm waiting for the egg.

Sperm usually only survives up to 3 days, so it’s best to have regular sex on the days leading up to ovulation.

Curious to know more about fetal development? Check out What Week Is Baby Fully Formed?

The egg begins its journey to your uterus where it’ll implant and become your baby-to-be. In medical terms, the fertilized egg is considered an embryo after implantation.

If you know when you ovulated, you can be quite accurate about the date of conception. This can give you a better idea of your pregnancy due date.

Keep in mind that 280 days is the average length of gestation.

Very few babies are born on their estimated due date. In fact, the figure is only about 3-5%.

Even though you’re 2 weeks ‘pregnant’, you’re not quite pregnant just yet. But don’t worry, you almost are.

Stay alert for any early signs of pregnancy, such as tender breasts and morning sickness, in the next few weeks as your pregnancy progresses.

What are some unusual signs of early pregnancy?

We’re all aware of the most common signs of early pregnancy, such as morning sickness and breast tenderness. But you might be wondering if there are any others.

Truth is, the hormonal changes your body experiences are pretty mammoth. Hormones can have an effect on almost every part of the body, so it’s no wonder the majority of women will experience at least some of the side effects of pregnancy.

The most unusual, and probably the least noticed, signs of pregnancy before you miss your period are sensitivity to smells and changes to food preferences. Where you once automatically reached for a coffee first thing in the morning, suddenly and inexplicably you don’t want one.

You might experience one or more of these signs, even before you’ve had a positive test.

Below is a list of some of the less well known early signs of pregnancy:

Tip: If your prenatal vitamin is a bit of a challenge, stop taking it, and reintroduce it in a week or two. Try to keep up your folic acid daily intake, though, or, even better, eat folate-rich foods.

Some women also notice other symptoms.

Read Metallic Taste in Mouth During Pregnancy and Shortness of Breath Early Pregnancy – Is It Normal? for more information.

Can you miss early pregnancy symptoms?

There’s an overlap between early pregnancy symptoms and premenstrual symptoms, as well as side effects from hormonal birth control.

You might only recognize these signs as symptoms of pregnancy after you have confirmation of being pregnant.

If you’re actively trying to get pregnant, now is the best time to take a prenatal vitamin. It’s usually recommended to take a daily supplement of folate in pregnancy.

This is to reduce your baby’s risk of developing certain birth defects, known as neural tube defects. It is often called folic acid, but there’s an important difference between folate and folic acid.

Be sure to read Folic Acid For Pregnancy – Facts You MUST Know to find out more.

Standard prenatal vitamins will contain the recommended dose of folic acid. Discuss with your health care provider whether this is the most appropriate dose for you, based on your own health circumstances.

Read Folate – Why It’s So Important Before and During Pregnancy for more information.

As you approach your fertile period, here are some more articles that you might find helpful right now:

Sarah is a registered Midwife, childbirth educator and trainer, blogger and proud mum based in Devon, UK. With over a decade of experience both in the UK and the USA, she is passionate about empowering women and their partners to make informed decisions about their care, helping them to feel positive and excited about their upcoming experience.